Friday May 4, 2018: Lucas goes to Kate for help with finding Chloe, Abigail emerges for Chad, and Theresa finds Chloe in Mexico. 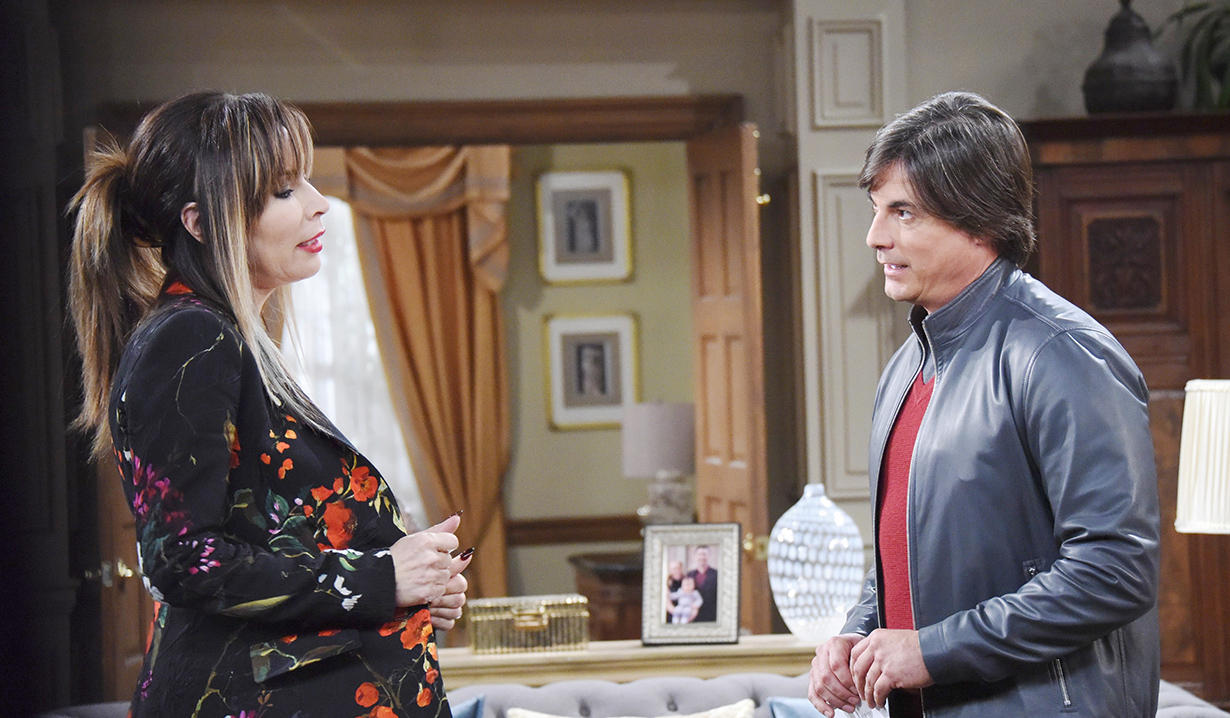 Abigail’s startled to wake up in her own mind without Dr. Laura, who has emerged at SPD to talk with Kate and Chad. Chad recalls meeting Dr. Laura before. She has nothing to say to him. Kate leaves them alone after sniping at her for leaving her for dead. Dr. Laura guesses Chad wants Abigail back. He does. Lauragail explains that Abby’s not ready to emerge yet. Chad asks if it’s because she killed Andre. Lauragail doesn’t bite. While they talk, Abigail frantically tries to escape ‘Marlena’s office’ when Ben Weston, the Necktie Killer, walks in. Meanwhile, Chad grabs Dr. Laura when she refuses to let him speak to his wife. At the hospital, Brady’s awake and happy to see Eve. She second guesses visiting him but he begs her to stay. He can’t stop thinking of her. Marlena interrupts. The results of his tox screen show no alcohol in his system but some unidentified drug. Eve thinks Brady must have taken something of his own accord. Brady’s exasperated.

At Doug’s Place, Lucas thanks Maggie for stopping him from drinking, though she says he’s the one who decided not to drink. Maggie’s sorry Chloe left so abruptly. Lucas admits things have been so wonderful which makes no sense why she’d leave. He must find her. He runs out.

In Mexico City, Chloe can’t get out of her locked room through the window, which is barred. In walks Theresa, which shocks Chloe. Theresa tells her about Miguel, who also goes by El Fideo. Theresa says he’s the man who took her away from the man she loves and her little boy. Chloe’s confused because that’s not what everyone in Salem thinks happened. Theresa explains she had to fake all of that to save Brady and Tate’s lives. If anyone gets in Mateo’s way, he’ll kill them. Chloe’s shocked. Theresa still loves Brady but Mateo doesn’t handle rejection well. Chloe’s beside herself. “You’re his slave?” Theresa’s eyes well up. She tried to get some dirt on him but he blocks her at every turn. Even Victor couldn’t help. Chloe tells Theresa why she’s there. Theresa admits he’s been obsessing about her, listening to her music constantly. Chloe starts to panic. Lucas was right. This job was too good to be true. Theresa’s surprised that they’re together. She tears up after hearing Miguel forced her to break Lucas’ heart. Theresa asks after Tate and Brady. Chloe says he remembers her and tells her that Miguel drugged Brady instead of Lucas by accident. Theresa worries that he’ll fall off the wagon. Chloe looks away. Theresa begs and Chloe’s forced to admit Brady already slipped, that he dated Nicole for a time and that now he’s serious about Theresa’s sister, Eve.

Maggie lets herself into the loft. She wants Claire to tell the truth about cheating on the Bella contest. Claire admits it’s true. Maggie wonders if Brady helped her.

Lucas follows Kate into the DiMera mansion. She updates him about almost being asphyxiated in the Secret Room with Vivian and Marlena. He’s aghast and sorry to hear. Can he help Abigail? Kate says no and talk turns to Chloe’s letter. Kate didn’t have anything to do with it but asks Lucas to let Chloe go.

Claire pokes her head in at the hospital and tells Eve that Brady didn’t help her rig the contest. She goes.

Marlena wanders back to SPD and stops Chad from manhandling Dr. Laura. She pulls him out of the interrogation room and asks him to speak from his heart. Say something Abigail can cling to. While they talk, Dr. Laura gets a headache. Abigail continues to see Ben, who tells her he can help her. She doesn’t need his help but he thinks she does. He knows what it’s like to lose your mind. She isn’t afraid of him anymore. Ben tells her to give in to the truth. He still loves her. Chad returns to Dr. Laura and demands to talk to Abby, while Ben tries to get close to Abigail to kiss her. Chad talks to Abby, telling her how much he loves her. Abigail almost kisses Ben when she hears Chad’s voice. Dr. Laura gets a headache and Abigail shoves Ben and goes into the light. She emerges to Chad and sobs. They embrace, crying.

Back at the loft, Claire has left and Maggie gives advice about keeping Claire’s friendship with Ciara. Claire returns and tells Maggie that she confessed. Maggie’s proud of her. She goes. Claire whines to Ciara that Bella will now have to put out a press release to tell everyone she’s a cheater. Ciara sighs. Maybe it doesn’t have to be that way. She’ll talk to Eve. Claire is touched.

Abigail reunites with her husband.

Theresa reacts after hearing who her sister has been dating.

Abigail Learns She Has Multiple...