Thursday May 3, 2018: Marlena councils Dr. Laura, Brady asks Eve for help in figuring out what's going on with Chloe, and Chloe finds herself in Mexico City. 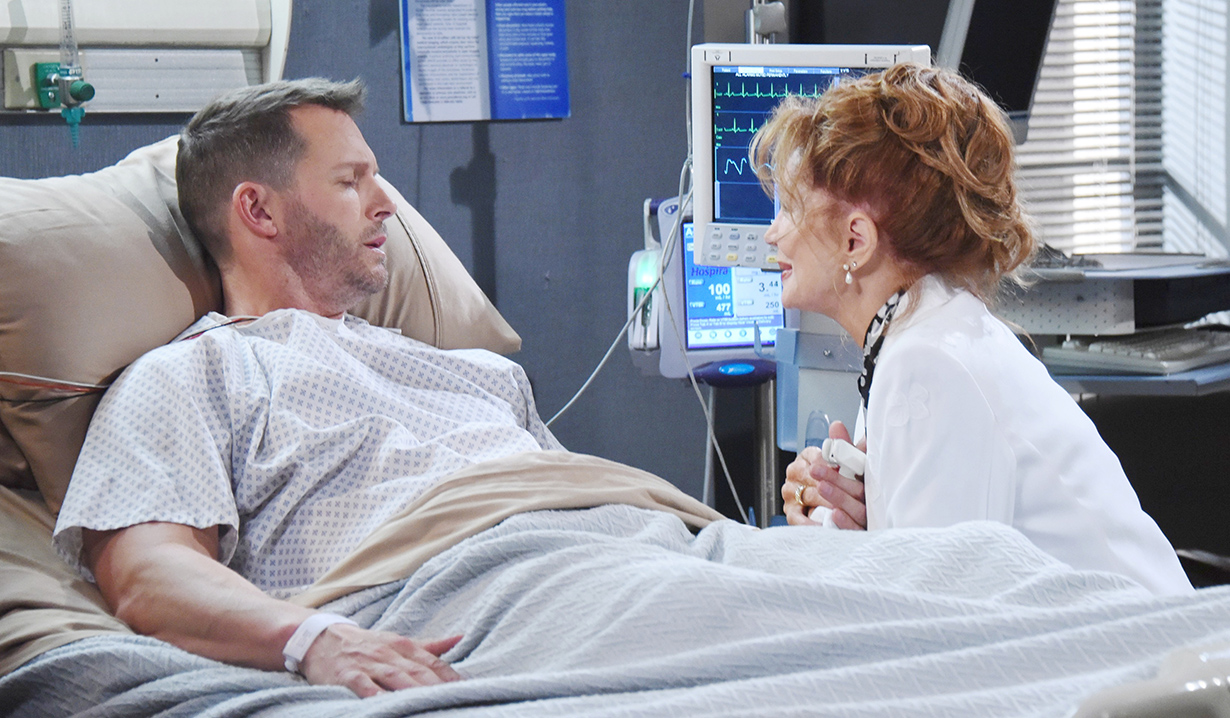 Kate bails Chad out at the Salem Police Department. She’s sorry he had to spend the night there. Chad’s sorry she got locked into the Secret Room. They head into the interrogation room where he sees the wig has been bagged and flashes to seeing his wife in bed with his brother. He blames Stefan for Abigail’s issues. Kate says Stefan’s not responsible for Abigail’s behavior. Kate informs him, “She’s sick. She has a disorder. She has a multiple personality disorder.” Chad tries to piece this new information together as Kate goes on to tell him that the personality named Gabby with a y wore the wig, and there’s one more. Chad stammers and fumbles over his words, wondering how this happened. Kate confesses that Marlena thinks Andre’s death brought this on – that she may be the one who killed Andre. None of this makes sense to Chad. If Abigail had a break then why was she seen in the security footage dressed as Gabi? Kate doesn’t have any answers. Chad can’t believe he didn’t see what was really going on. They agree he has to fight for the woman he loves.

In Marlena’s office at the hospital, John’s surprised she didn’t take the day off. He wants to take her home and take care of her. While she loves the offer, she needs to take care of Abigail. John admits Abigail worries him. She tried to kill Doc. Dr. Laura walks in with a police escort and corrects him. She tried to kill Marlena. But she lets them know that she, Abby and Gabby all have immunity. John leaves them alone and Marlena asks if Abigail can return. When Laura refuses, Marlena asks how Abigail fragmented in the first place. Did Abigail kill Andre? Dr. Laura blames Gabi Hernandez for committing the crime. Marlena thinks Lauragail arranged for Gabi to take the fall for the crime. Dr. Laura doesn’t respond. She threatens to take Abigail away. Marlena insists that Abby needs treatment. They can integrate the personalities. Dr. Laura takes off. In Brady’s room, Maggie cries as Brady wakes up confused as to why he’s there and how this happened. Brady tells her that Claire rigged the contest and Eve now thinks that he helped. She dumped him. Maggie asks if that’s why he started drinking. Brady maintains that he had nothing to drink. Outside, Lucas finds Eve. He questions if she’s seen Chloe. She can’t get into his drama. She rants about Brady being a drunk. Lucas does not believe Brady did this to himself. He takes out a letter Chloe wrote him to tell him she was leaving. It makes no sense to him and he is looking for help figuring out what’s going on. Eve says maybe Miguel convinced Chloe to leave. Maggie appears. Brady’s awake so Lucas takes off. Maggie lets Eve know that she believes Brady didn’t rig the contest or take a drink. She suspects Eve cares deeply for Brady or she wouldn’t be there. Maggie goes and John pops up to tell Eve that he saw Brady. He’s asking for her. Eve reluctantly goes in and John heads to Marlena’s office. She tells him there’s only one person who can bring Abigail back.

Chloe wakes up in bed in a room in Mexico City and wonders where she is. Miguel unlocks the door and heads in with a gun pointed at Chloe. They go over the events leading to Chloe’s kidnapping and Chloe worries for her family and friends. She is sure that Lucas will find her. Miguel assures that his employer won’t let that happen. Miguel’s employer can’t wait to see Chloe perform again. “He’ll be here soon.” He leaves and someone opens the door that Chloe’s surprised to see.

Lucas arrives at Doug’s Place and re-reads Chloe’s letter. Chloe talks about needing to take this chance on her dream and go with it, which means letting him go. Maggie finds him later, with a drink. He doesn’t drink any but won’t give up on Chloe.

Back at SPD, Kate gets off a call with Marlena and tells Chad that there’s one person who can bring Abby back. Him. In walks Lauragail.

Check it out! On this day in soaps, May 3, 2007, Phillip Kiriakis was slipped a mickey

Brady has issues convincing family that he wasn’t drunk.