Days Recap: Abigail Takes Control of Her Body From Gabigail

Wednesday May 2, 2018: Will tries to help Gabi find out what's going on with the police in her case, Abigail makes a reappearance, and Hope, Paul and John save three lives. 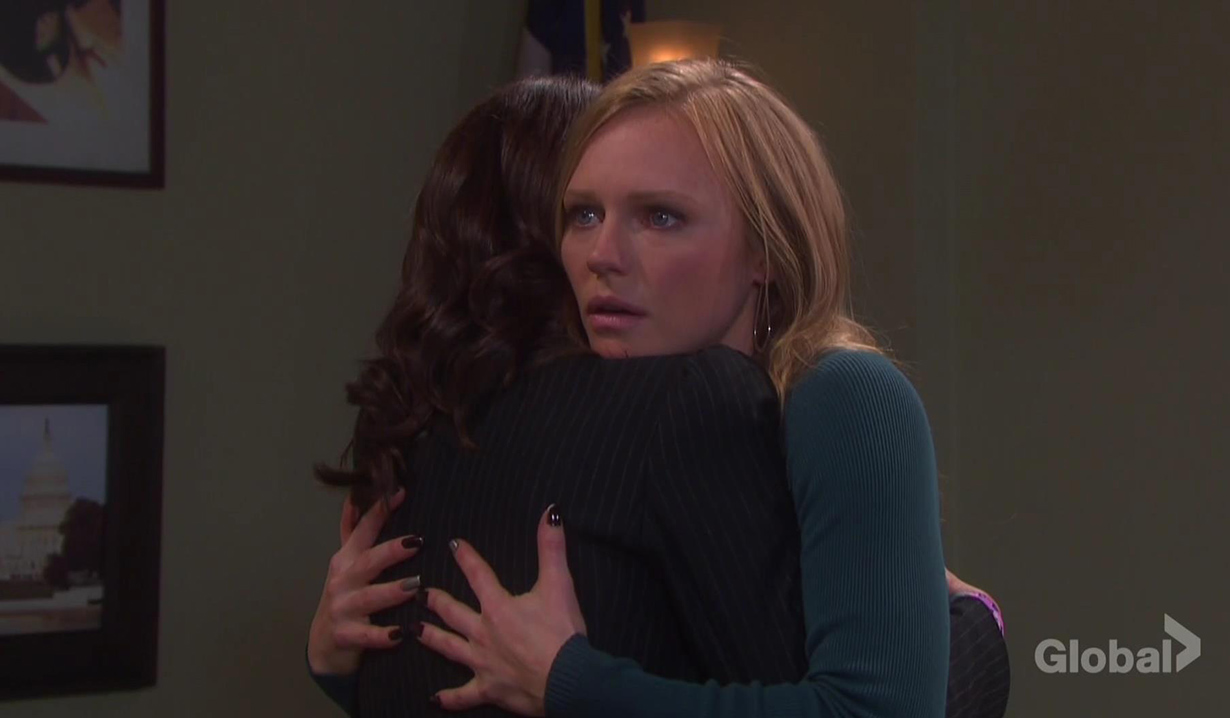 Will lets himself into Gabi’s room at the prison infirmary. Gabi wakes up and they agree she shouldn’t be in there. They blame Abby. Will wants to do something to help. He’ll talk to the others at the Spectator and see if they have any intel from SPD. He makes a call but gets nowhere. He tells Gabi that nobody at Salem PD is sharing any information with the press. Gabi’s disgusted that Abigail’s protected while Gabi’s stuck in there for a crime she didn’t commit. They talk about Arianna and Gabi asks if he and Sonny are going to reunite. Will says no. He’s moved on and so has Sonny, but Will worries that the man Sonny’s involved with is in cahoots with Vivian Alamain. Gabi’s troubled. Will says Paul’s checking into it and asks her not to worry. He kisses her on the cheek and goes.

From SPD, Gabigail tells Stefan she made a deal with the DA, to protect him. Inside her head, Abigail wants out. She picks up ‘Marlena’s phone’ and hears Gabigail and Stefan discussing the deal and becomes confused. Dr. Laura appears and locks herself in with Abby, introducing herself. Abigail says her grandmother’s name is Laura. Dr. Laura places her keys to ‘Marlena’s office’ on the desk and states that she wants to protect Abby. Abigail becomes stressed and curious as to why, then asks to be let out of there. Dr. Laura agrees to help her get back to her husband and kid. She turns to get Abby a glass of water. Meanwhile, Stefan tells Gabby that once Dr. Laura starts trying to help Abigail, things will get touchy. Suddenly, Gabby drops the phone as she turns back into Abigail. She hears Stefan calling to Gabby and snaps, “It’s not Gabby, it’s Abigail, you son-of-a-bitch!” She drops the phone when Stefan calls her “Gabby,” then tries to call Chad.

In the Secret Room at the DiMera mansion, while John gives Marlena mouth to mouth resuscitation, Paul follows suit on Kate and Hope stares up at the air and wonders, “Why me?” before she starts reviving Vivian. Vivian comes to, then Kate and Marlena takes longer. Once they’re alert, everyone heads into the great room upstairs, and they give their own statements about how they wound up downstairs. Vivian looks horrified to learn that Stefan’s been hospitalized and the reason behind it. Kate goes off while Marlena asks after Abigail, and Hope explains what’s going on with Abby calling herself Gabby with a y. Everyone disperses and John gives Marlena a lingering kiss. In the foyer, Paul updates Kate on his progress with Vivian’s case and admits he’s not sure if he trusts Leo. Kate asks him to be more discreet since Vivian knew he was spying on her. When Kate asks, Paul describes Leo to her. Kate flashes to seeing Vivian pay off a man at the house one day and thinks they’re the same person. Meanwhile, Doc tells John that Stefan didn’t brainwash Abigail. She’s ill.

Leo arrives at the Kiriakis mansion. He frantically texts Vivian, asking if their plan is still on. Sonny opens the door and Leo says he has a contract for him to sign off on that he forgot earlier and a box of chocolates from a business deal. Sonny’s in a mood but lets him in. He signs and reluctantly explains he’s on edge because of Gabi’s prison attack and his concerns for Arianna. Leo’s sorry. He urges Sonny to open up anytime he needs. Arianna arrives and hears that something has happened to her mama. She inquires as to what that is and Sonny fumbles. Leo hands her the chocolates and says her mom is fine and sent him to give her this candy. Ari’s as thrilled as Sonny is relieved and he allows the child one. He puts her to bed and thanks Leo profusely.

Vivian arrives at the hospital and gets Leo’s texts. She tells him to carry on with their plan then runs to see Stefan. She calls Chad a monster and then says that’s what he gets for locking his mother up with “those two heretics.” Vivian’s angry about Gabigail trying to kill her but Stefan blames Dr. Laura, not Gabby.

Hope turns up at SPD and when Abigail sees her, she jumps into her arms, frightened. Hope comforts her and promises to help her, then Dr. Laura appears and tells Hope she’ll be the one to help Abigail.

Eve is torn between visiting Brady and ignoring him.

Kate tells Chad the truth about his wife.