Tuesday May 1, 2018: John and Paul rush to save Marlena, Gabigail makes a deal with DA Trask, and Jennifer yells at Stefan for raping her daughter. 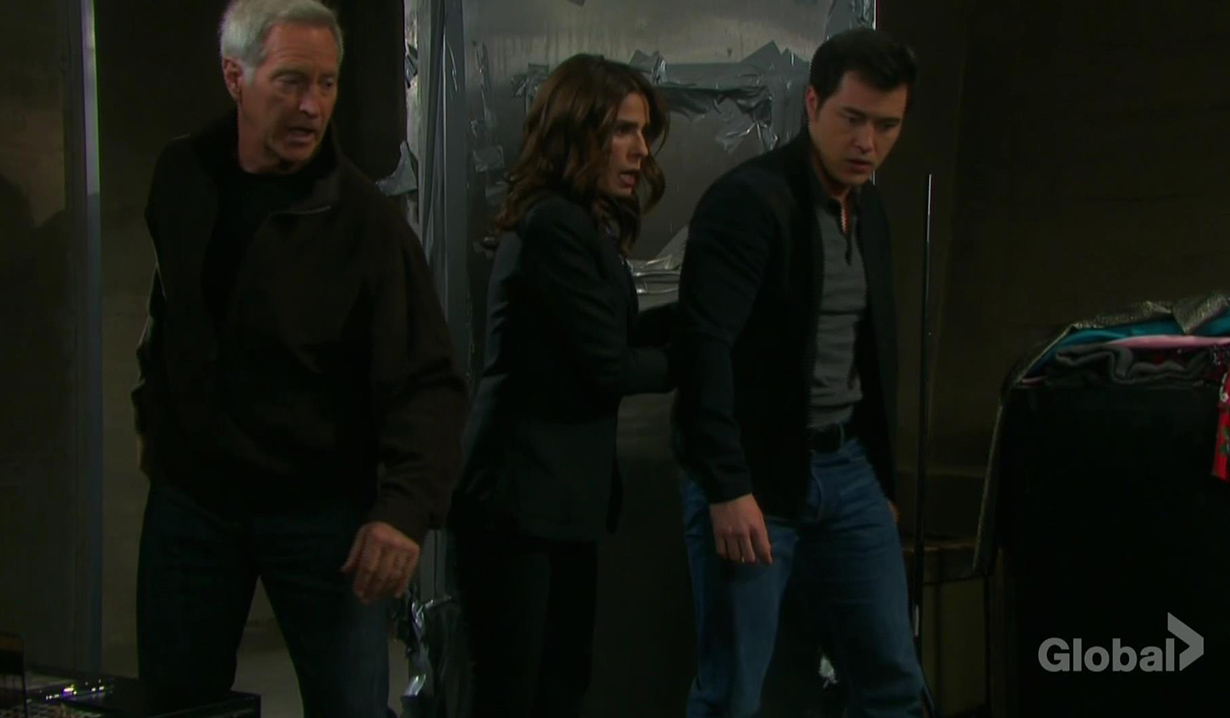 Jennifer and Eric arrive at the hospital looking worried after hearing that Brady is drinking again. Jennifer notices the guard outside Stefan’s room and wants to speak to him before they see Brady. In his bed, Stefan hopes Gabigail went free. Jenn goes in to see him while Steve arrives. Eric calls Steve over and they talk about how upset he is that he let “Abigail” go. Kayla eavesdrops from nearby as Steve opens up about his blindness and how he can’t protect Kayla and doesn’t want to be a burden. Kayla appears. She tells Eric that they’re waiting on Brady’s bloodwork to come back from the lab. She’s concerned to learn that Jenn’s in with Stefan. In Stefan’s room, Jenn calls Stefan a bastard and confronts him for brainwashing her daughter, raping her and making her out of her mind. Stefan says what he did with “Gabby” was consensual. Jenn denies that, and Stefan says Jenn underestimates her. “You are a monster!” Jenn yells. Stefan tries to breathe and whispers that there’s so much Jenn doesn’t understand. Outside, Eric leaves Kayla and Steve alone and Kayla asks her husband not to pretend he’s not struggling. “Let me in,” she begs. Back inside, Jenn yells at Stefan and Eric comes running. He removes her from the room and they return to Steve and Kayla and let them know that Marlena’s missing. Jenn asks if Kay can access Marlena’s files, which could help them find her before it’s too late.

At SPD, Dr. Laura tells Gabigail that she cut off the air supply at the Secret Room so Kate, Vivian and Marlena couldn’t tell anyone anything. Gabigail is visibly upset, calling this extreme, even for Laura. Laura reminds her that if the women told the police what went down at the mansion, Marlena will get rid of her and bring Abigail back. When the women are found, Stefan will be imprisoned, and Abigail will be freed. Gabigail is pissed. Dr. Laura warns that she’s taking over now, and Gabigail has a headache and turns into Dr. Laura. In the other room, Paul wonders if Marlena was on to what’s going on with “Abigail,” which is why she went missing. DA Melinda Trask arrives and demands Hope let Stefan and “Abigail” go. John asserts himself. They can’t do that until they find out where Marlena is. Trask says he’s only a PI and has no say. Suddenly, they hear “Abigail” screaming and rush to see her. Dr. Laura turns to Gabigail and she tells every one she wants to see Stefan. She explains to John that Marlena, Kate and Vivian are locked up with no air supply. She’ll tell them where the women are if they provide her full immunity for her and Stefan. She flashes to Stefan kissing her and them in bed as everyone takes off outside to discuss her offer. Everyone gangs up on Trask until she bites. Hope refuses to allow immunity to extend to Andre’s murder. Trask calls Kayla and requests that she set up a phone call between “Abby” and Stefan.

In the Secret Room at the DiMera mansion, Vivian, Kate, and Marlena have issues breathing. Since there is no airflow coming from the door, which is duct taped shut, they move some crates and find a vent. They rejoice momentarily. Vivian hugs Kate who shrugs her off, but they notice the vent is bricked up. They deal with it by drinking, though Marlena is positive John will find them. Kate’s looking forward to seeing Andre again when she dies. Vivian laughs and says Andre made a joke of her. Marlena defends Andre. She knows Andre loved Kate. She saw how he looked at her. Vivian snorts and spills her partnership with Andre. Kate doesn’t believe Vivi. Vivian goes on to say that it was the reason he fired Gabi before the IPO. Kate goes at Vivian and when she gets close, Vivian vows that if she comes any closer, “I’ll dye that ridiculous blue streak red.” Marlena gets between the two and Vivian falls unconscious. Back at the hospital, Kayla gets off the call with Trask and tells Jenn, Steve and Eric about “Abigail’s” deal. Kayla goes to Stefan and hands over her cell phone. “Gabby” calls. She tells him about her deal with the DA. Outside, Jenn thanks Steve for finding Abigail. Steve knows she’ll be fine. She’s strong and loved. They embrace.

John, Paul and Hope arrive at the DiMera mansion, and rush down to the Secret Room. They tear off the tape, and break the door in and find Vivian, Kate, and Marlena passed out.

A rescue is attempted.