Thursday April 19, 2018: When Vivian refuses to allow her son to go away with Gabigail, Stefan throws her in the Secret Room, Eli visits Gabi in prison, and JJ and Lani discuss her pregnancy. 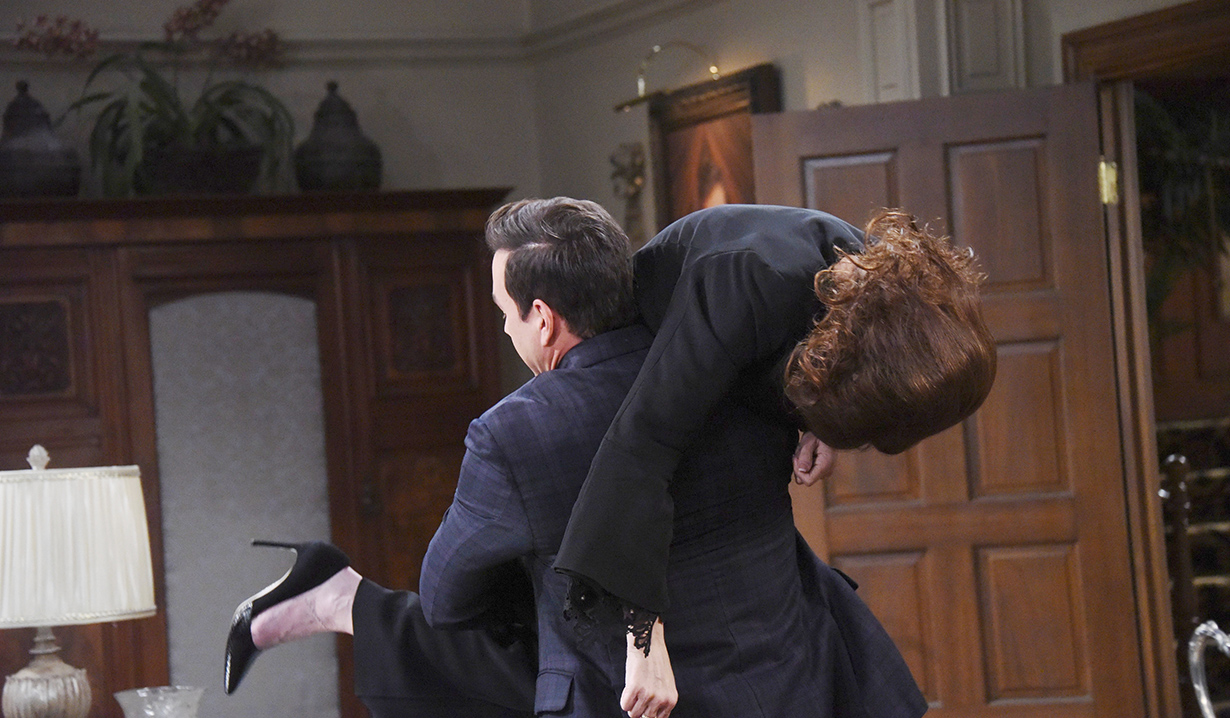 At SPD, Rafe asks for Hope’s help with Gabi’s case. She’ll do all she can as commissioner and he has Eli as back-up. Rafe whines that he wants to work with her and though Eli is ex-FBI he doesn’t think he has the experience to take this case. He reminds Hope that part of being a cop is putting personal issues aside. They realize they need more photos from all of the other security cameras from the hotel in Hong Kong so Hope calls Shawn to see if he can help.

At home, Kate gets a text from Paul to meet about Vivian, when Vivian approaches. They snipe at one another, and Vivian takes off. Upstairs, Chad gets a call from who he thinks is “Abigail,” who lies that she’s with Marlena in her office and doesn’t need him to be there. Gabigail disconnects – from Stefan’s room. She’s proud she pulled the wool over Chad’s eyes. She and Stefan snuggle in bed and she rehashes her concern that Marlena will make her disappear. Stefan won’t let that happen. Meanwhile, Chad heads to the great room and tells Kate that Abigail is meeting Marlena for a session. He relays that while in Marlena’s office he could hear her screaming out to him even though she wasn’t there. Back upstairs, Vivian barges into Stefan’s room, snapping, “That’s enough of this nonsense.” Vivian calls Gabigail a mental case and Gabigail lashes out, asking why she’s jealous of her own son. Vivian slaps Gabigail across the face. Stefan lets his mom know they’re leaving town. Vivian won’t allow it and knows Chad will chase them to the end of the world. Vivian threatens that if he does this, they’ll wish he had never been born. She storms out. Stefan will take care of her. He knows she won’t hurt him.

JJ sees Lani at the hospital. She’s happy he is going to become an EMS. She wants to be friends but he refuses. Lani pleads since they get along so well and had such good times. The tears come as she apologizes for hurting him. It’s the worst mistake of her life. JJ doesn’t want her to beat herself up. She thinks she deserves to suffer but JJ disagrees. As time goes on, he realizes he’s no one to judge her for her lies as he’s told some whoppers. JJ thinks she is a good person. He inquires as to how the baby is and she’s reluctant to say but admits she could lose the baby and the reason why. He wonders if she’s going on bed rest then decides he doesn’t want to know. He asks why Eli isn’t there with her.

Eli visits Gabi at Statesville. He thinks it’s wrong that they threw her in prison before her sentencing. He still loves her. She says it doesn’t matter. She’s done with him. Eli says it’s fine but he won’t stop until she’s free. Gabi tells him she doesn’t want to be his cause. He can save that for Lani and his baby. This and what Abigail did to her is all she t hinks about in her cell. Eli gives her a drawing from Arianna. Gabi’s touched and cries. He understands more than ever how much she needs to be free. Gabi asks if the baby and Lani are okay and he lies that they’re fine. He rehashes what they’ll do to get her out and goes.

Chad arrives at SPD. He shows Rafe and Hope Stefan’s expenses for the Hong Kong trip. He hopes it will help. He goes and they discuss Stefan paying off the guard. Since he doesn’t know Chad wasn’t wearing a wire, they could use it to get the guard to “flip on Stefan.”

Back at the mansion, Kate quietly calls Chad and leaves a message to come home as soon as possible. She saw the woman from the security video and she’s in Stefan’s room! Stefan finds his mother in the grea t room. If she loves him, she’ll accept that he needs to leave with Gabby permanently. Viv threatens to call the police. Stefan apologizes and lifts up his mom, throws her over his shoulder and takes her to the Secret Room. Upstairs, Kate knocks on Stefan’s door and tells whoever it is to come out. “Your little game is up!” Gabby opens the door to a shocked Kate.

Back at the hospital, Eli walks up as Lani returns JJ’s engagement ring. He approaches and lets them know he was with Gabi, who is hanging in there. They leave JJ to go to an appointment.

Chad goes to visit Gabi. She asks if Abigail has admitted to being a “lying bitch.”

Though Hope doesn’t want to, she ends up working with Rafe. 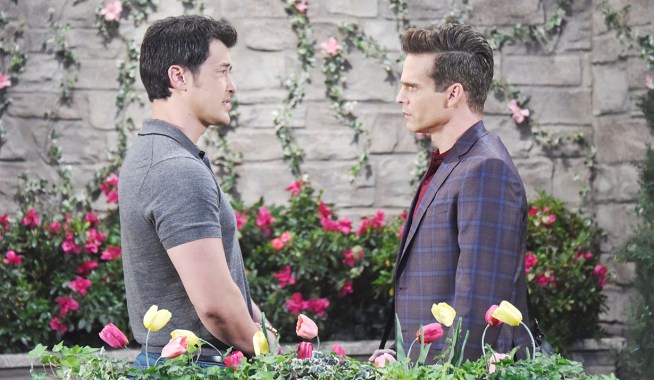 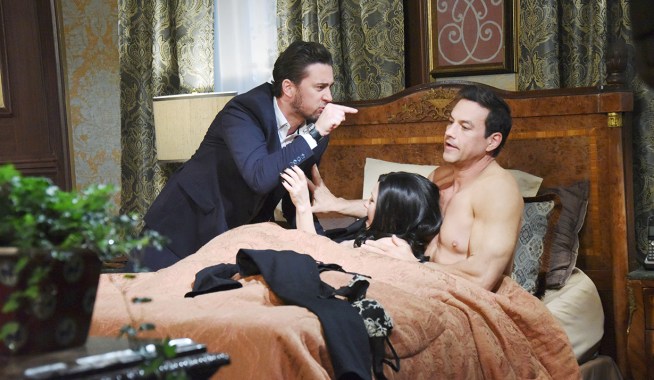