Tuesday April 10, 2018: Marlena is harmed by Gabigail, Lucas lets Miguel know who is in charge, and the top five finalists come out in the Face of Bella contest. 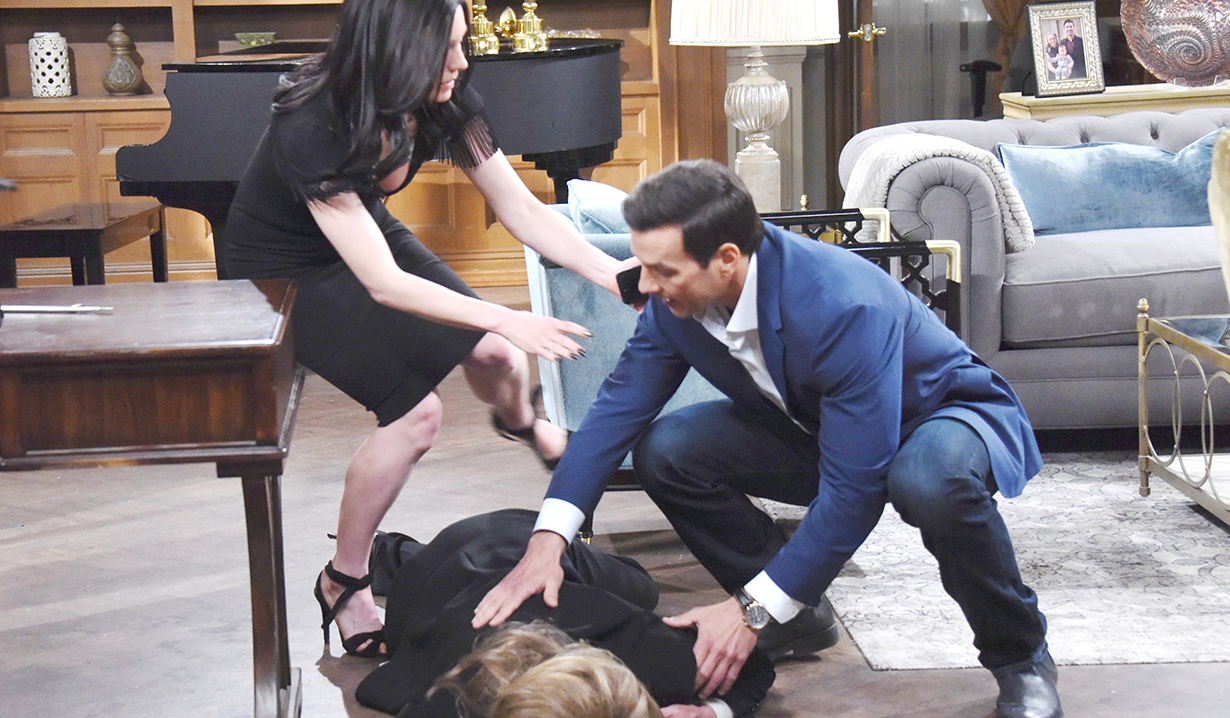 At the Horton square, Eve talks to someone on a call about tallying votes for the New Face of Bella contest. Brady appears and touches her shoulders. She moves and demands he stop touching her.

At the loft, Claire is annoyed that there’s been no word on who the new Face of Bella is. Tripp mocks them both for caring at all. They find him obnoxious so he heads out. Finally, the top five results are in and both girls are finalists. Claire assumes Ciara’s cheated because she’s getting more votes. Ciara denies that. Claire starts getting nasty and they argue until Claire leaves.

From SPD, Rafe calls someone to ask them to tell Gabi that between him and Arianna’s two fathers, they’ve got her care covered. They disconnect as Hope walks in. She just got in from Hong Kong and is sorry to hear about Gabi’s case going sour. Rafe wonders if it’s Stefan’s fault. They discuss the Gabi look-alike and assume Stefan hired her to set up his sister. Rafe feels he’s failed Gabi. Hope hugs him. She’s so sorry. Later, they discuss their relationship and Hope lets him know they’re over for good. Rafe begs but she doesn’t think what they had is worth saving. It was a lie. She hands over annulment papers. Rafe’s crushed she has signed.

More: Soaps trivia on over 70 years of soaps

Marlena walks into the DiMera mansion. Why is “Abigail” dressed in a brunette wig and sexy dress? Stefan lies that they’re getting creative, working on Gabi Chic. Marlena suggests she take off the wig and they can start their session. Gabigail declares that they can do this in front of Stefan. Marlena asks if she’s acquainted with Dr. Laura. Gabigail scoffs and calls her a quack. Marlena also wants her glasses. She tells Gabigail about who Dr. Laura is and refuses to back down since Abigail came to her asking for help. “I’m not Abigail,” Gabigail says. She introduces herself. Marlena asks if she means Gabi as in Gabi Hernandez. “No, I’m a completely different person,” Gabigail says. Marlena turns on Stefan to castigate him for not getting Abigail help. Gabby insists she’s real and all she needs is Stefan. To prove a point, she kisses him. Marlena purses her lips and narrows her eyes. “She is ill. She needs you to help her, not take advantage of her for some reason.” Gabigail slams Chad for not supporting Abigail. Marlena knows that Gabby is afraid she’ll disappear if Abigail takes over permanently. “You’re lusting over somebody that doesn’t exist,” Marlena yells at Stefan. She thinks he’s just like his father. She goes to call Chad and Gabigail grabs her phone. Marlena says the confidentiality law makes an exception when the therapist thinks the patient is a danger to others. She calls what Stefan’s doing a crime and conveys that Abigail is her patient, not Gabby. Stefan vows to ruin Marlena if she harms Gabigail. Gabby doesn’t want her help. Marlena realizes that Gabby testified against Gabi Hernandez, not Abigail. “You’re babbling,” Gabby says. Marlena realizes Gabby was the person on the security footage the night of Andre’s murder. Marlena says it’s her obligation to contact the police and Gabby freaks. She hits Doc over the head with a fireplace poker, knocking the shrink unconscious. Stefan asks why she did that. Gabby felt she had no choice. At Doug’s Place, Chloe admits she’s thinking about the offer Miguel gave her. Lucas assumes it’s BS but can tell she’s considering it. She doesn’t want to give up her dream. Lucas worries the guy is a crazy stalker. Chloe laughs. He’s paranoid. Just then, Miguel arrives. Chloe hasn’t contacted him and he’s now forced to “bring out the big guns.” He reaches for something inside his jacket and Lucas grabs him, pinning him on the table. The man divulges that it’s just a plane ticket. Lucas apologizes and lets him go. Miguel gives the ticket to Chloe and asks her to consider going to Mexico to sing.

Back at the square, the contest results are in. Brady’s surprised Eve’s rooting for Ciara over Claire. Tripp drops by with their drinks and hears the news. He worries Claire won’t take this well. He leaves and Brady bets Eve that if Ciara wins, he’ll leave her alone. They shake on it. Later, Claire runs into Brady, who urges her to drive her fans to the website to vote. Claire wants to cheat but Brady refuses. He goes and she considers cheating.

From the park, Miguel calls someone and says he extended the offer but there is an issue.

Eve drops by the loft to talk about the contest.

Stefan and Gabby do something to ensure Marlena doesn’t talk.

Lucas confronts the man he believes to be after Chloe. 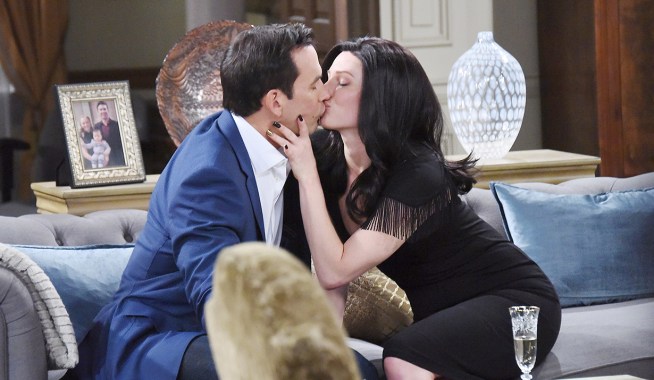 Marlena's Imprisoned in the Secret Room 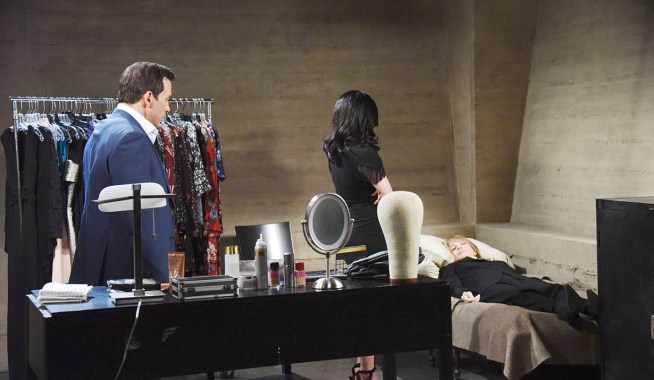