Monday March 26, 2018: Chad is set up by Stefan, Rafe gets an earful from Hope's parents, and Gabigail reveals to Stefan that it's hard for her not to let Abigail in. 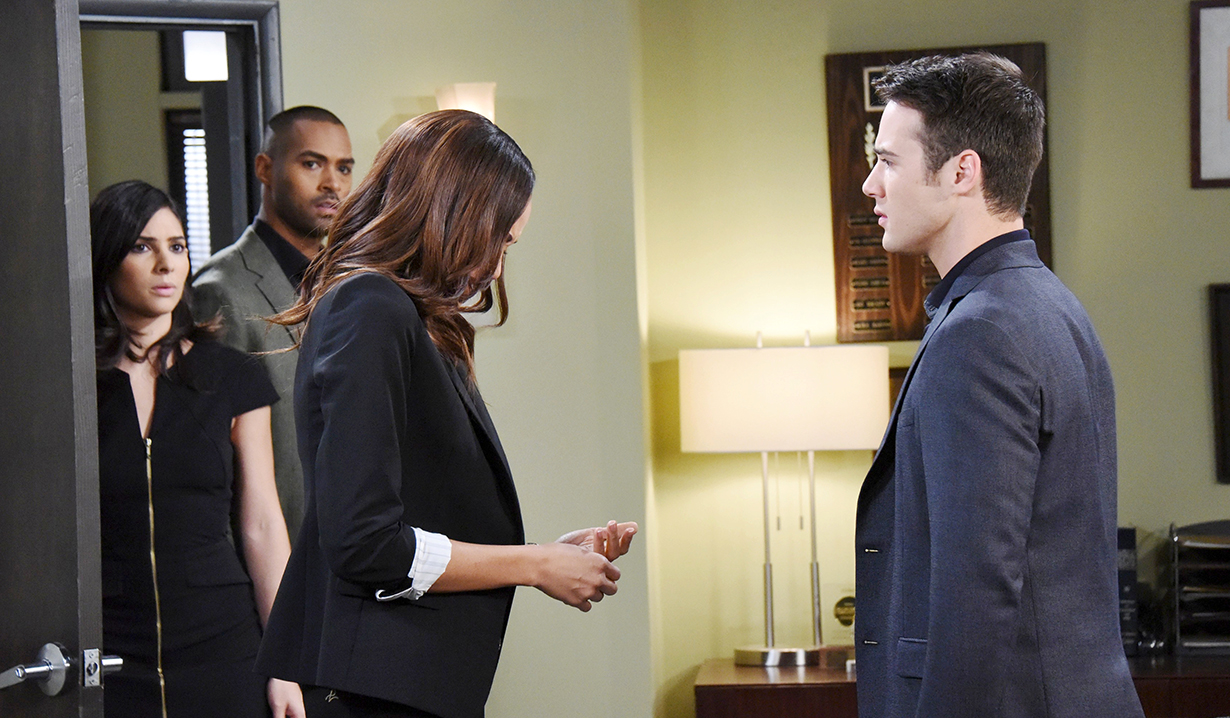 Gabi and Eli walk into the interrogation room at SPD just as JJ forces Lani’s confession that her baby is Eli’s. Gabi demands an explanation. As Lani sobs, Eli tells Gabi he’s sorry but Lani’s telling the truth. The baby is his. Gabi apologizes to JJ. If she had known the baby wasn’t his she would have told him. Eli drags Gabi outside while JJ tells Lani he doesn’t even know her. JJ asks how long Val has known. “Did you tell her?” Lani says she found out by looking at her medical files. JJ realizes that it’s no wonder Val didn’t want them to marry. “And I told her to mind her business,” he exclaims. Lani blubbers. JJ doesn’t understand why she lied. Lani loves JJ and wanted a life with him. JJ thinks she pitied him. Lani doesn’t. She wants to raise the baby as his. In fact, she thinks of him as the father. She’ll do whatever it takes if they

can get through this. JJ tells her it’s over. Outside, Eli tries to explain but Gabi goes off on him for lying to her again after he promised not to. Eli tells her some backstory about how Lani was going to abort until JJ learned about her pregnancy. Gabi questions him. Eli says Lani couldn’t go through with it because she was worried JJ would attempt suicide. Gabi says the baby changes everything. She wants him to take her back to her cell.

More: Fallout from Lani’s scandal worth the wait

In the Hong Kong hotel, Hope explains she needs an annulment from Rafe because they never should have married with that secret. Shawn wonders if there’s still hope for them to have a fresh start. Hope doesn’t answer, making Shawn believe she still loves Rafe. Upstairs, Stefan shows the head of security, (played by Americus Abesamis), a photo of Chad and says, “You know what to do.” Nearby, Chad sees the back of Gabigail heading into Stefan’s room and tries to talk to her. Security stops him and Gabigail rushes inside before Chad sees her. Security takes Chad downstairs where Hope and Shawn find them. Shawn introduces himself as a liaison to the police, so the man discloses that they found drugs in Chad’s luggage. Chad snorts that somebody planted them. Hope tries to vouch for Chad as the commissioner of Salem SPD in USA but the officer reminds her she has no jurisdiction there. She goes with Chad and the officer while Shawn runs upstairs to Stefan’s floor. He finds a room key in the maid’s cart. Meanwhile, Hope and Chad arrive at the security office. In Gabigail’s room, she explains to Stefan what just went down with Chad. Stefan tells her that Chad was detained by security. He won’t bother her. Gabby says Abigail is strong and it’s been difficult when Chad is around not to switch back to her. Shawn appears at the security office. He didn’t see Stefan or Abigail. Chad decides to call “Abigail,” but she doesn’t check her phone because she’s busy kissing Stefan, so he leaves a message and then says, “What if she helped kill Andre?” He needs to keep this woman away from Stefano.

Meanwhile, back in Gabby’s room, she wants sex with Stefan but he pulls away.

“I don’t want to take advantage,” he says because Abigail doesn’t know what’s happening right now. Gabby doesn’t care. This is her body too and she wants this. She knows he does too. They kiss. Stefan has to leave so Gabby listens to the message from Chad who tells her Stefan planted drugs on him and that he thinks he saw the woman from the security video. As Gabby listens, she starts to have a migraine. While Chad tells Abby to stay away from Stefan, Abigail comes out. She’s confused.

More: Steve’s world crashes around him

Rafe bumps into Julie and Doug at the square. They’re rude to him and throw his mistake in his face. Julie is angry Rafe chased Hope out of the country and is staying in Salem for his sister instead of following Hope, “Not that you should,” she says. Rafe is sorry. He believes in his sister and Hope wants a divorce. Julie’s confused. Rafe tells them about the elopement. This pisses Julie off even more. She starts shouting about his awful criminal family and he tells her to leave them out of it. Doug starts in on Rafe for breaking his trust and Rafe apologizes. He leaves and Julie’s surprised that Doug’s not angry at her for her outburst. Doug states sadly, “That lying, cheating coward destroyed my princess’ happiness.” Julie hopes she’ll find it again.

Will and Paul make love.

JJ Punches Eli in the Face in Court...

Paul and Will Make Love, While Sonny...