Friday March 23, 2018: When Lani reveals she cheated on her beau with Gabi's beau, JJ has a fit, and in Hong Kong, Hope is confused when she thinks she sees Gabi with Stefan. 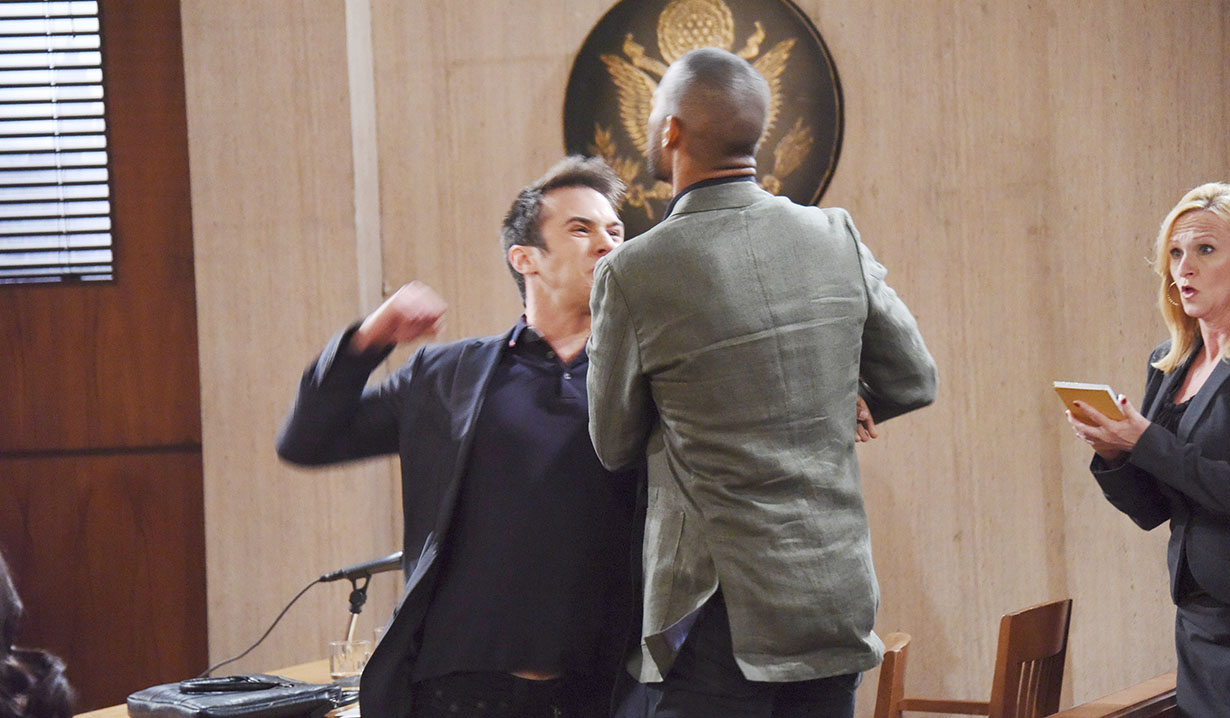 All hell breaks loose in the middle of Gabi’s trial when Lani is forced to admit to cheating on JJ with Detective Eli Grant, Gabi’s boyfriend. JJ yells at Lani for lying to him and is pissed Gabi’s not shocked, assuming she knew. When Eli defends Lani, JJ punches him in the face. Rafe grabs JJ and pulls him off of Eli. Judge Simms reminds JJ that he just hit an officer of the law. He books JJ in contempt though Lani begs Simms not to. Rafe takes JJ out of the room and Trask says, “Now that the floorshow has concluded, could we possibly proceed?” They continue. Justin has Lani clarify that Gabi knew about the sex and assumes it means their relationship was contentious. Trask calls him out for leading the witness. Justin rephrases and Lani admits they’re not exactly best friends. Justin asks how the court can believe anything she says when she has personal issues with the defendant. Trask objects. Simms allows it and Trask approaches the witness. She says there’s no evidence that anything Lani said was false. Lani’s allowed to step down and Simms calls a recess. Justin wishes Gabi would have told him about the cheating. Lani approaches and Gabi tells her that Justin had no idea about her and Eli. On her way to talk to JJ, Lani tells Eli she’s not sure if she’ll spill about the baby yet.

In the interrogation room at SPD, JJ paces, reeling. He notices Rafe’s not surprised. Rafe admits he knew but it’s not his place to discuss it. Lani walks in. Rafe leaves and Lani explains everything that happened that night. “It meant nothing,” she says. JJ believes her. They weren’t together then, but why didn’t she tell him the truth? JJ asks if this baby is his and Lani sobs. He realizes it isn’t. Back in court, Trask gloats to Justin, who remains confident Gabi could be home by dinner. Eli goes to Gabi. He too feels confident she’ll get off.

Chad knocks on “Abigail’s” door at the hotel in Hong Kong. Gabby is down in the restaurant with Stefan. She talks about being free to eat what she wants since Abigail’s tastes are “a total snooze.” Meanwhile, Hope thinks Stefan is with Gabi, but knows it can’t be. “Maybe it’s the woman in the video,” she says, heading over. Gabby walks away before Hope makes it there and Hope greets Stefan. She asks who he was with. Stefan covers and Hope asks where Abigail is. He says she’s in her room. She taunts him, and then Shawn approaches. Stefan leaves. Hope talks about having to go home and face Rafe soon. Shawn notes she hasn’t signed divorce papers yet. Hope says, “Not yet,” but knows what she’s going to do.

Upstairs, Gabby sees Chad knocking on her door and quickly goes through Stefan’s adjoining room. She uses it to head into her own room, removes her wig and covers her dress with a robe. She opens the door and feigns sleepiness. They embrace and he explains he’s there to take care of her. “Abigail” worries that it’ll rage Stefan and he’ll kick them out of the house. Chad shrugs. They’ll move. As he talks, Gabigail gets a headache. She accuses him of mistrusting her with Stefan. She hears Stefan head into his room and tells Chad to leave, fast. They kiss and he runs. Stefan lets himself in and Gabigail tells him what happened and that she had to force herself to turn into Abigail. Stefan says it’s time to take care of Chad. Back downstairs, Chad finds Shawn and Hope. Hope tells them about the woman he saw with Stefan, who he called a business associate. Hope wonders if it’s the woman in the video. Chad goes upstairs to check. He sees Gabby’s back as she locks her door, and looks confused.

Back at SPD, Rafe kicks himself as he talks with Justin about his break-up with Hope. Eli and Gabi walk up. Rafe tells them about JJ and Lani talking privately. In the interrogation room, Lani says she loves JJ and doesn’t want to lose him but it’s true. Gabi and Eli walk in as Lani says that Eli’s the father.

Gabby admits her feelings for Stefan.

There is an arrest.

Lani Confesses She Cheated with Eli...

Stefan Has Chad Arrested for...