Thursday March 22, 2018: Chad arrives in Hong Kong and gets advice from Belle and Hope, Gabby and Stefan bond, and Gabi's trial begins. 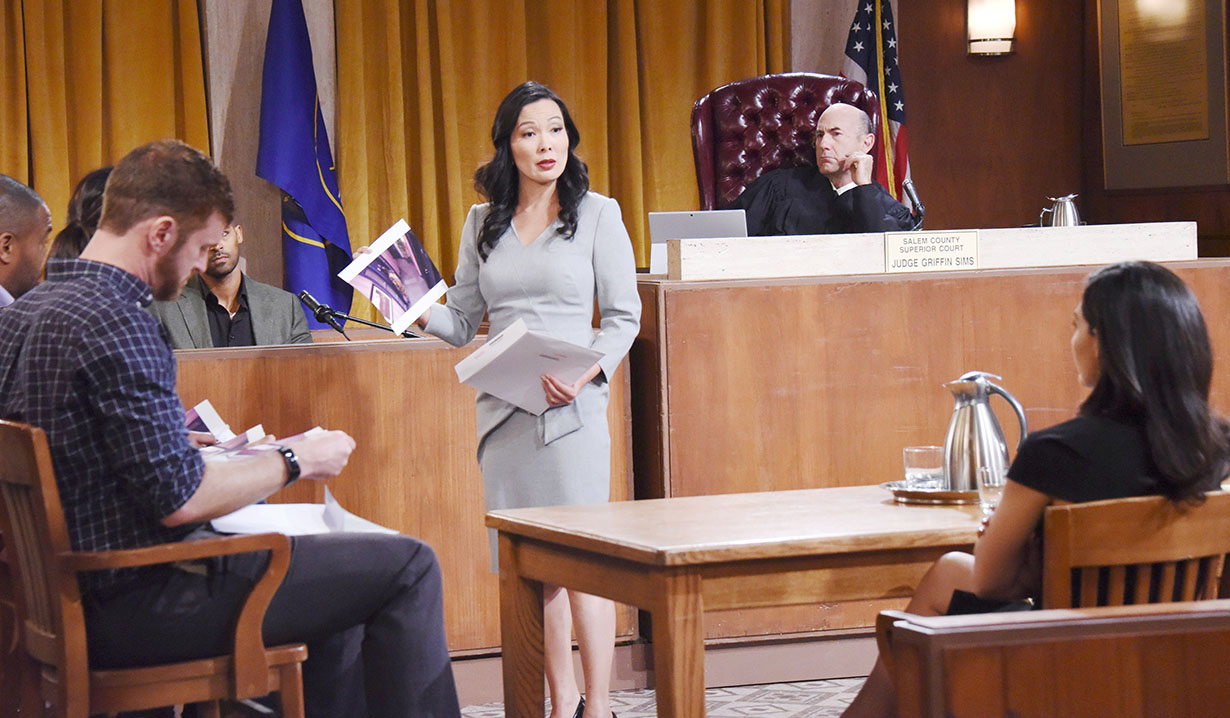 More: Patrika Darbo on the chance of a Days return

At SPD, Lani and Eli think of Gabi since it’s her first day of trial. Eli bitches that they have to take the stand against her. Eli offers Lani some food and she begs off, almost puking from morning sickness. Eli’s concerned and admits to having s econd thoughts about dealing with this lie. He wants to tell the truth. In walks JJ, who wonders if the trial will be too stressful for Lani. Lani assure him she’s fine and tells Eli to go be with Gabi.

Outside the courtroom, Gabi credits Rafe and Eli for the support they’ve given her. Rafe says he knows Eli regrets cheating. Gabs asks after Hope. Rafe says she’s avoiding him. Gabi offers to talk to Hope, knowing her brother is a good man. Rafe wants her to focus on getting off. Once the trial starts, DA Melinda Trask tells the jury that Gabi already killed once. Gabi gives her a death glare when Melinda relays the events leading to Andre’s murder, which she thinks Gabi executed once she was fired. She plans on proving Gabi returned to DiMera Enterprises that fateful night and finished him off, then tried to hide the evidence. Justin gets his turn and lets the jury know that they just heard a story about sensationalism and revenge which is mostly fictional. Justin says Trask takes circumstantial evidence and tries to turn it into fact. He says it’s impossible to see the woman’s face in the security video. The true killer is targeting Gabi as well as Miss Trask, who has an axe to grind because Gabi Hernandez got an early sentence in Nick Fallon’s murder. Rafe’s first to take the stand. Trask tries to establish him as a hostile witness but he’s fair. He tells the jury about the night they found Andre and the evidence they compiled. Melinda’s thrilled when she shows Rafe the urn lid that Rafe says was missing at the crime scene, which Gabi tried to hide. Trask looks at Gabi, smugly. Justin cross examines Rafe who agrees with Justin’s assessment that the murderer could have been Anna DiMera. Eli takes the stand and Melinda tells the jury to look at the photo of the mystery woman on the security footage and consider it’s possible that it was Gabi. Justin cross examines and asks if Eli can positively name Gabi as the person in the video. Eli says no and it’s Justin’s turn to look smug. Lani takes the stand. She tells the jury about the anonymous tip from someone who said Miss Hernandez was acting suspect. She followed her and found her trying to get rid of the evidence, the coat, the urn lid and ID badge. Trask grins. “No further questions.” Justin whispers to Gabi. He needs to discredit Lani. They chat discreetly and then Justin asks Lani why Gabi asked her to look the other way that night. Lani finally answers after a beat, saying it’s because she had sex with Gabi’s boyfriend, Detective Eli Grant. JJ looks shocked.

More: Days review on turning the DID story around

In  Hong Kong, Belle shows Hope the annulment papers which she can claim to have married under false pretences and fraud. Belle asks if this is what Hope really wants. Nearby, Gabigail and Stefan arrive. Gabby’s excited to be herself. “I get to go full Gabby,” she says. Across the way, Hope looks up and sees Chad. She calls his name and he rushes over with hugs for both women. He’s sorry for what happened between her and Rafe and tells them he’s there to keep an eye on his wife because he doesn’t trust his brother. In Gabby’s room, she bounces on the bed, happily and Stefan looks as though he’s not sure what to do with her. Gabby tells him she only wants to be friends on this trip. She wants to hang out for a while and admits to being worried Dr. Laura will takeover. Gabby isn’t really sure who she is. Stefan understands because he was adopted from an orphanage. He grew up as Sam Maitland and his mother has helped mold him into someone he can be proud of. He knows where he belongs and wants that for Gabigail. Gabby thinks he’s too stuffy and takes off his jacket, and messes his hair. He turns beet red and confesses he feels silly. She unbuttons his shirt and they gaze into each other’s eyes. Stefan backs off. Back downstairs, Belle and Hope agree that Abby is playing a dangerous game. Belle goes to take a call and Chad asks Hope to keep an eye on Abby. She’d be happy to. He remembers when he was served divorce papers last year and Hope urged him to fight for his marriage. He encourages her to do the same. Belle returns and there’s discussion about how fragile Abigail’s been. Later, the party breaks up and Chad goes to Gabby’s room while she’s dining with Stefan downstairs being spotted by Hope.

Hope wonders who the woman Stefan’s with in Hong Kong.

Vivian Issues Sonny a Warning - She...

JJ Punches Eli in the Face in Court...