Wednesday March 21, 2018: Chad learns that Sonny and Will's divorce has finalized, Gabi gets a treat from Eli, and Kate and Stefan overhear Gabigail and Vivian arguing. 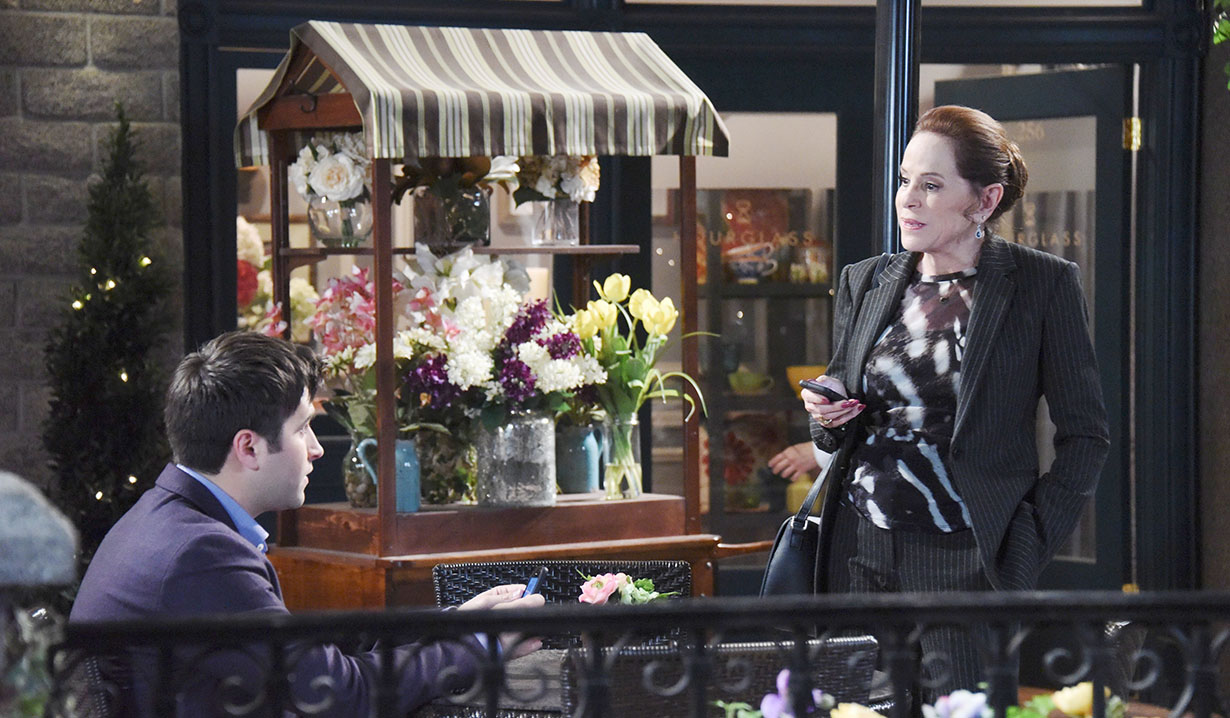 In SPD, Eli hands Gabi a sweater to cover her prison jumper so she can say hello to Arianna. Gabi tears up, overjoyed to FaceTime with her kid. They chat for a bit and once the call has ended, Gabi sobs on Eli’s chest. Eli’s number one suspect is Stefan in Andre’s murder but they haven’t found the woman from the security video. Gabi worries who will care for Arianna if she winds up in prison, especially since Sonny and Will are divorced.

Sonny finds Chad in the square and learns he’s off to Hong Kong to go after his wife and Stefan. Sonny gets worked up and encourages Chad not to let this happen. Stefan could try to seduce or kill her. Chad knows that, which is why he’s following them there. Sonny’s glad. Chad won’t make Gabi’s trial and is happy Sonny will be there. They discuss keeping up the lie that Gabi’s on a business trip and Sonny sarcastically says he can’t wait to tell her he and her father are divorced. Chad’s upset to hear about it and wished he had taken him for a beer or something. Sonny knows Chad’s had a lot on his plate and says he’s moved on. He shows Chad a photo of Leo, the guy he swiped right with on the faux Grindr app the bartender, Jeff, set him up with. Even Chad thinks the guy is “hunky,” and urges his friend to contact him already. They embrace before Chad leaves.

Jenn leaves a message for Kayla from Doug’s Place. She’s worried about Abigail’s tests. Eric arrives and they discuss possible reasons behind Abigail’s memory loss and migraines. Jenn’s overwrought with worry. She recalls Abby having PTSD and recalls Andre bringing her back from the brink. Without him, she worries she can’t help Abigail.

Gabigail comes from the secret passage in the DiMera great room with a suitcase and clothing. As she packs, Kate arrives and looks at Andre’s phone, before heading in. Stefan stops her and asks how she got Andre’s phone. She tells him the cops returned it to her. He taunts her about Andre being a “total whack job” even though she’s obviously mourning her dead husband. Kate slaps Stefan across the face and accuses him of murdering Andre. Stefan denies it. Kate says of all the DiMera men, he’s the unlovable one. Stefan asks how to change that. “Admit what you did to Andre,” she says. She asks if Andre mentioned her the last time Stefan saw him. Stefan remembers standing over Andre’s body, telling Vivian that he hired a few guys to kidnap Andre, not kill him. He tells Kate that Andre said nothing. In the great room, Vivian spots Gabigail and asks her not to get any ideas of braining her with a fireplace poker. Gabby won’t as long as she doesn’t call her Gabigail. Vivian agrees to it. She’s thrilled to learn Gabby is going to Hong Kong but upon learning her son is going with him, she threatens that Gabigail better not hurt her son. Gabigail makes threats to bring Vivian down if she goes down and Vivi yells, “Get away from me you little tramp,” which brings Stefan and Kate rushing in just as Gabigail has packed her wig. Vivian drags Stefan out and Kate asks “Abigail” to be careful during the trip. Both she and Chad are worried about her. Kate knows they haven’t been close but she can see Abigail hasn’t been herself since Andre died. Kate says she knows Stefan killed Andre and doesn’t want “Abigail” to face danger by going away with Stefan. Gabigail feels her blonde locks and a strange look crosses her face as she hears Kate call her Abigail. Gabigail doesn’t respond but takes Kayla’s call and hears her tests are all normal. She hasn’t had a headache since, she admits. Meanwhile, Chad returns home and argues with Stefan in the foyer before saying goodbye to “Abigail.” Later, Stefan and Gabigail, with her wig back on, leave.

In the park, JJ tells Lani he passed his paramedics course.

Lani and JJ wind up at Doug’s Place and run into Jenn and Eric. JJ shares the good news that he passed his course. Jenn’s glad to hear it. She’s had a rough day and needed good news. Jennifer gushes about the baby coming and Lani’s guilt eats her up. “I can’t take it anymore,” she cries. She quickly recovers and says she’s not sure how to be a mom. Jenn says common sense will take over and she can call her anytime. JJ vows she can count on him, too. They go and Eric and Jennifer canoodle and kiss.

Sonny is about to contact Leo when Vivian approaches. She warns that she and her son are going after him and Titan. Sonny shrugs her off. He contacts Leo and later, when she’s alone, Vivian catfishes Sonny on the Grindr app. It’s her texting, not Leo.

Lani Confesses She Cheated with Eli...