Sonny & Will’s Divorce Finalizes and Each Attempts to Move On

Tuesday March 20, 2018: Sonny and Will's divorce is finalized, Sonny moves on, Rafe tries to get Hope to return home, and Shawn has encouraging words for his mother. 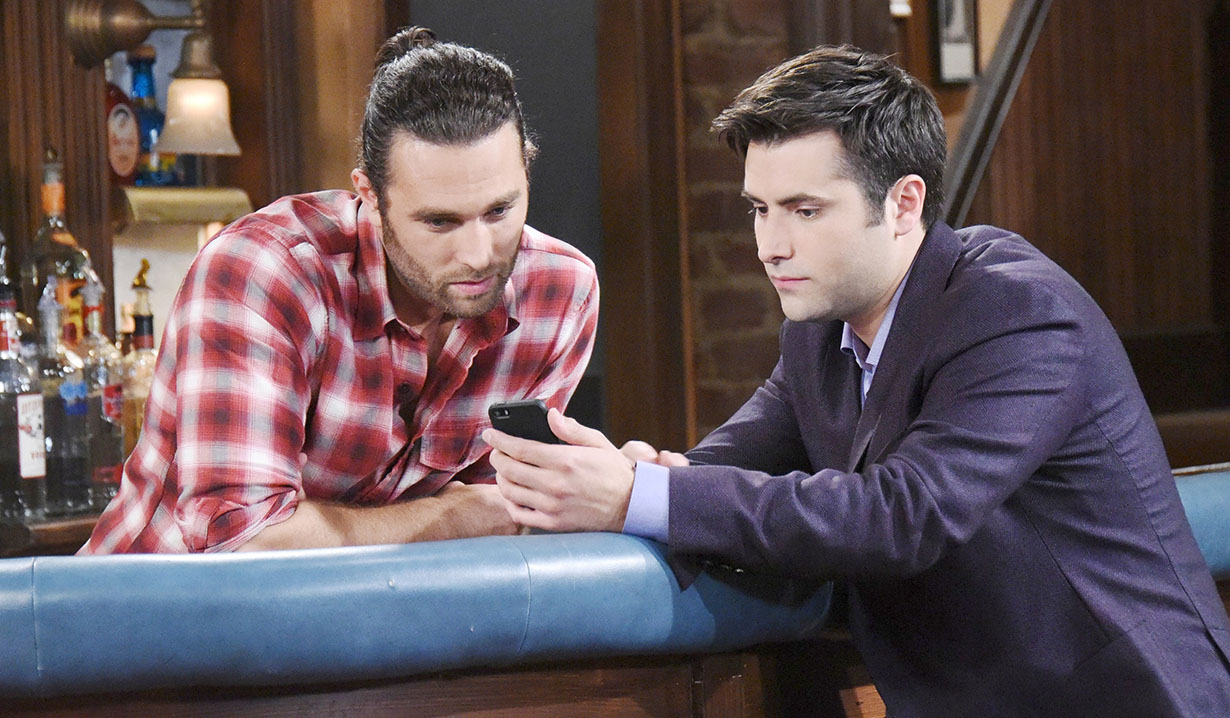 Paul stops Sonny at the square to inquire about Gabi’s trial which starts today. They make small talk and then Sonny asks if he and Will had a good time last night. Paul doesn’t want to discuss that.

At Doug’s Place, Lucas tells his son he’s on a roll with 102 days of sobriety. Will’s proud of him. Kate pops up and Lucas tells them about his date with Chloe tomorrow. Kate hopes he’s not serious but Lucas is dead serious. Will takes off and Lucas and Kate argue about him dating Chloe. Kate offers Lucas a job with DiMera once they take back the company from Stefan and he refuses and reminds her he had major misgivings when she was with Andre but he supported her. He asks her to do the same for him and when she won’t, he walks away and calls the rink to see when they open tomorrow. After he disconnects, Chloe walks up. They discuss her triumph singing in Vienna and that her parents were there in the front seat. She calls Parker and later, they decide to go skating immediately. On the way out, Miguel, (played by Phillip Anthony-Rodriquez), spots them and calls someone, telling them “She’s back in Salem,” and that he’ll keep an eye on her.

In Hong Kong, Shawn’s glad his mother is with him but doesn’t like the reason behind her visit. Hope says by now, everyone knows about Rafe and Sami and she just needs some time. She notices Rafe calling and sighs. “So much for no pressure.” Shawn urges her to at least talk to Rafe, who is probably worried. Hope answers and Rafe asks her to come home. Hope refuses and admits she’s not sure when she’ll be home. She tells him not to call her and disconnects, leaving him filled with sorrow. Later, Shawn apologizes for Claire. Hope replies that she’s not to blame but she can’t get rid of the imagery of Rafe having sex with Sami. Shawn reminds her that they were broken up when Rafe did that but Hope’s disgusted that while she was suffering, Rafe was with Sami. Hope feels foolish. Shawn has been there before and he and Belle made it work. He knows how happy she was with Rafe and would hate to see her give that up. Hope decides on divorce and asks Shawn to get Belle to draw up the papers.

Back at the square, Sonny asks Paul if the sex was as good as he remembers. Paul replies that this isn’t any of his business. Sonny agrees and spits that the divorce is final, just as Will walks up. Sonny says, “I hope he doesn’t cheat on you the way he cheated on me,” then stomps off. Will apologizes for Sonny but he doesn’t think he’s the same person anymore. Will admits the divorce hit him a little. Paul holds his hand as Will feels bad for Sonny after seeing his anger. Paul corrects his beau, saying Sonny’s hurt because he loves him so much. Will eats all of Paul’s chocolate cake as they ponder this being their first official date. They walk and kiss but Will wants to go home tonight, out of respect for his marriage.

Kate arrives at SPD. Rafe tells her he just got off a ca ll with Hope who is refusing to come home. Kate suggests she just needs time to think. Rafe tells her everything and Kate shrugs that he and Hope were on a break, which is at least something. Kate also knows Hope is no saint. “People in glass houses, and all that,” she says. Rafe hands over Andre’s cell phone. They found nothing on it. She can take it home. Kate’s touched that Andre had a photo of them on his cell. Rafe didn’t realize they had a real connection. Kate admits it surprised them both and then he betrayed her anyway. She’ll never know if he chose her over his ambition. She wishes Rafe luck with Hope and goes.

At the pub, Sonny looks at his divorce papers before the new hot bartender, Jeff. serves him. Sonny talks about his divorce. Jeff is sorry and gets him a drink while he opens up about his recent break-up and how the best thing is to get back out there. Sonny takes the hint and asks him out but the guy is dating. They look at a new dating app together and Sonny is excited to make a match.

Gabi prepares for her murder trial.

While Steve Has Forgiven John for...

Vivian Issues Sonny a Warning - She...