While Steve Has Forgiven John for Poisoning Him, Kayla Still Struggles 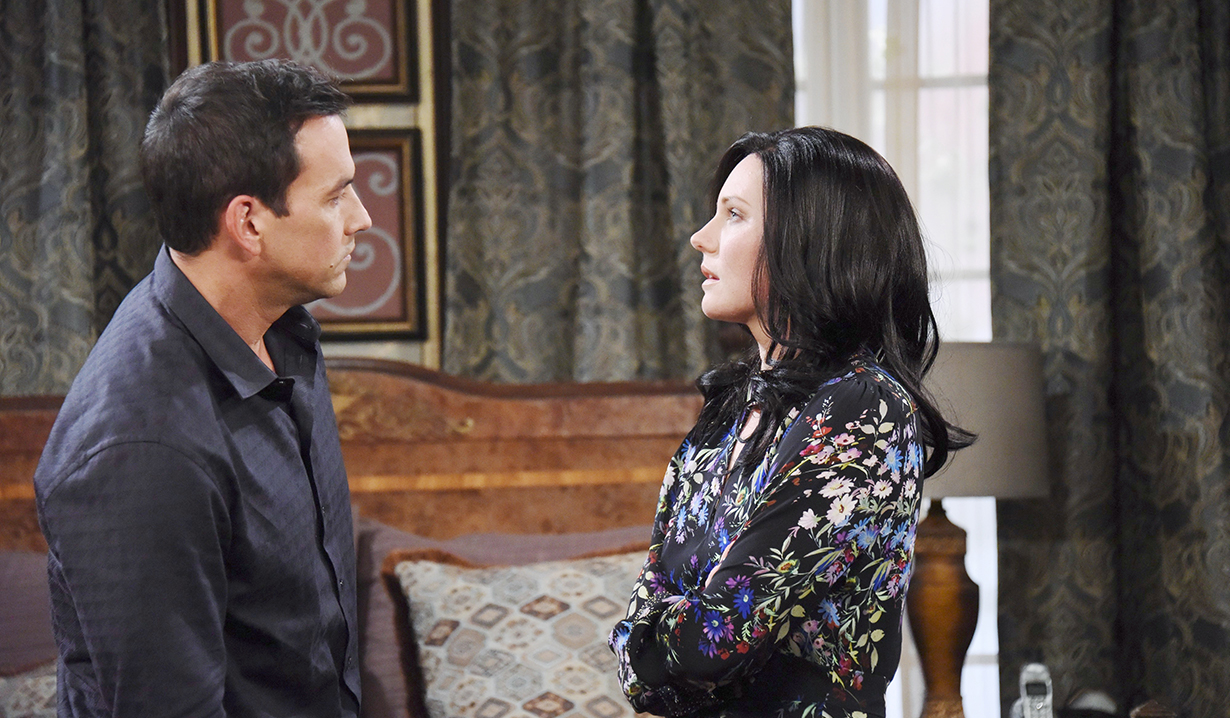 Brady corners Eve at the park to discuss the Face of Bella campaign. Eve reminds Brady she fired him and threatens to kick him where the sun doesn’t shine if he doesn’t leave her alone. Brady knows she blew through her budget and thinks he can help her turn things around. Eve can’t work with him knowing he took her happiness from her and ruined her life. “Stay out of my way,” she begs, quietly. Brady forces her to listen. He loves her and still wants to marry her. She changed his life. He’ll do all he can to make her business the most successful around. He doesn’t want his grandfather’s approval or Basic Black. “Just you,” he says. Eve tells him to stop. They’ll do this but to keep it professional. When she goes, he grins to himself, thinking this is a start.

At the DiMera mansion, Stefan tells Gabigail, who is posing as Abigail, that they’re going to Hong Kong on a business trip. Chad becomes jealous and then asks how his brother can leave town when Salem PD is investigating him. Stefan snorts that Gabi’s on trial for Andre’s murder, not him. He has to tend to the company that Chad and Kate almost ruined. If they can’t work with him for the good of DiMera, they can pack their bags now. He leaves them to consider it and Chad paces and refuses to let “Abby” go. Gabigail says she is going. Chad takes a call from Lani and Gabigail finds Stefan in the foyer. He takes her to his room.

More: Days column, on Sonny’s pain as Will moves on

At the hospital, Kayla rants to Marlena that thanks to John, there is nothing more she can do for Steve. Marlena defends John and then reminds Kayla that John was trying to help and feels awful. Kayla doesn’t care how John feels. Marlena argues that Kayla and John are on the same side. Kayla’s hurt and disagrees. She tears up. She wishes John would have come to her. Marlena’s overcome and whispers how sorry she is. She knows Stayla loves one another more than most and with that love, she thinks they can expect a miracle. Kayla apologizes for Marlena taking the brunt of her abuse. Marlena smiles. That’s what friends are for.

Steve has troubles walking to the Brady’s pub and bumps into Kate, who asks, “What are you, blind?” Steve says he will be soon enough. He elucidates on his diagnosis and Kate tells him she’s sorry to hear. Nobody deserves this, “Not even you.” Steve laughs. Kate asks who caused this and John walks up. “I did,” he confesses. Later, John and Steve have a beer and Steve tries to get John to accept his forgiveness. He reminds his friend he forgave Bo for taking his other eye. Steve goes to the restroom and returns with two more beer. John says he could have gotten them but Steve says soon he won’t be able to do stuff like that. They joke and laugh and John admits he’s relieved to have Steve’s forgiveness. Steve says he’ll have to give up bird-watching and being a darts champion. John suggests they play now. Steve decides to cover his semi-good eye and tells John not to let him win because he feels sorry for him. They play on and John tries to distract him by blowing on Steve’s ear, then lies that the whole place is standing on the tables, watching. Steve takes the last shot and wins the game with two bulls eyes! John has to pay their bar-tab which Steve says will include lobster and 3 kegs. Steve asks how he feels about horseshoes.

Kate arrives home and Chad fills her in on the cops analyzing Andre’s cell phone. They commiserate over wanting to slap Stefan’s smug look off  his face and Chad fills her in on Stefan and Abby’s trip. Upstairs, Gabby puts on her brunette wig. She feels more like herself. Stefan congratulates her on her acting like Abigail. Gabby finds it exhausting. She’s up for going away, knowing she’ll be able to be herself. Back downstairs, Kate assures Chad that Abigail loves him but Chad’s still worried about leaving his wife with a killer. Back upstairs, Gabby doesn’t think Dr. Laura will let this trip happen. She returns to the great room and hears Kate say that Abby can handle herself. Gabigail agrees and thinks she can do what it takes to help clear Gabi’s name. Kate agrees that Abigail should go.

Hope lets Shawn know what happened at her wedding.