Thursday February 1, 2018: Will takes matters into his own hands concerning his grandfather poisoning Steve, Carrie returns to Salem to get her parents out of jail, and Andre's funeral begins. 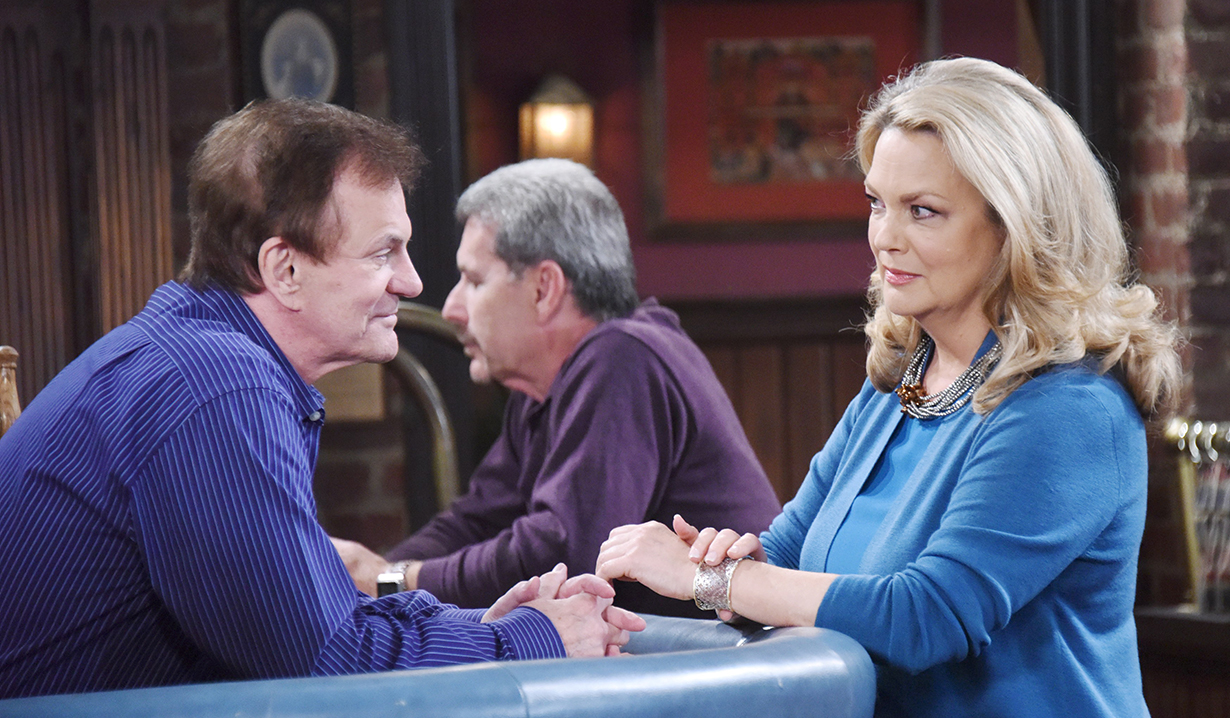 Rafe arrives to Hope’s office at SPD. She shows him their wedding invitation which has a date on it. Rafe takes her in a kiss until Carrie Brady walks in. They tell her the good news and she retorts that there isn’t going to be a wedding because she intends on suing them for false arrest. Hope says Carrie’s parents, Roman and Anna, obstructed justice. Anna went into Andre’s office with the murder weapon and left without it. Rafe discloses that Roman perjured himself by giving Anna an alibi. Carrie calls them out on murdering Stefano and covering it up. “My father did everything for you and this is how you repay him?” Hope points out that Roman taught them how to do their jobs and that’s what they’re doing. Carrie thinks it’s clear that Anna’s being framed. Carrie tears up. She can’t lose them. Hope comforts her. Later, Anna and Roman wind up in the interrogation room. She’s so sorry for dragging him into this mess. Carrie appears. Anna can tell her daughter has been crying. Carrie hugs Anna and yells at her dad, wondering what he was thinking. Roman barks, “Is that all you came here to do? Yell at me?” Carrie hugs him. She vows to get them out of jail but she wants answers. Soon, Hope and Rafe return. They let Roman and Anna go. Later, Rafe sees Carrie alone and she blurts, “I know that you cheated on Hope.”

In Will’s room at Martin House, Paul and Will ponder over why John is poisoning Steve. John arrives on his doorstep, surprised to see Paul there. He asks his son to work on Anna’s case with him since Steve’s ill. Paul asks what’s wrong and John just says he’s really worried about his friend. Paul agrees to help and John leaves the room so Paul can wrap things up. Paul comes up with a plan.

Wearing all black, Kate sits at the square and flashes back to the last time she was there with Andre, which was the first time they kissed. Will walks up and can see she’s upset. Is there anyone she can talk to? Kate has her dry martini with a twist. Will asks her about Andre, since he can’t remember him. Kate calls him maddening. He had a flare for the theatrical and liked to push her buttons, “but if he loved you, he’d fight for you.” Will thinks he sounds complicated. Kate tears up. Will can see she loved him. He walks her to the funeral.

In the DiMera mansion, Vivian’s dressed in black while she talks to Stefano’s portrait and knowing his penchant for drama, assumes he’ll show up to Andre’s funeral. Stefan meanders in. Viv says she thinks Stefano saw Andre as a liability. “He was becoming… nice,” she says, almost horrified. Stefan’s worried John will find them out. Vivi comments that if Stefano were there he’d just brainwash John. Upstairs, Abigail dreams about finding Andre, who almost tells her who hurt him when she wakes up, upset. Chad comforts her and they agree Andre was complicated, generous, smart, hilarious…Then there was the other side. They snuggle. Abby cries as she flashes to bonding with Andre over their shared mental health issues. Back downstairs, Chad arrives and he and Stefan talk business until Abby appears and admonishes them. They go to the mausoleum.

John and Paul arrive at the pub. Paul makes a big deal out of putting their coats up by the door, and the men sit to discuss Anna’s mysterious letter. John says it looks like someone was trying to provoke Anna into killing Andre. As they talk, Will walks in and not-so-secretly goes through John’s pockets as Paul keeps John busy looking at a watermark. When they look it up, John is rocked, thinking he may know who wrote the note. He goes to make a call and Paul uses the time to rush outside where Will is waiting. Will says there’s nothing in John’s pocket. They should tell Steve and the cops. Paul asks him not to yet but Will takes off. Paul heads back inside and Roman and Anna arrive. Anna heads upstairs while John tells Roman he knows who wrote Anna’s letter. After Paul and John leave, Roman tells Anna he knows who sent her note.

Chad and Abigail meet Stefan, Vivian and Kate at the DiMera mausoleum. Vivian starts a snipefest but Stefan asks her to stay civil today. Chad gives a touching, yet honest speech. Abigail goes next and then somebody arrives…

Back at SPD, Will goes to see Hope. He tells her he needs to trust her, because it’s a matter of life or death. And it’s about John Black.

At the square, Paul and John take a walk and Paul says he has something to say.

Rafe has questions for Stefan.

On Hearing Steve Has an Incurable...

Andre's Funeral Is Crashed and...