Wednesday January 31, 2018: Eve's advice to Sonny about relationships backfires, John still struggles with poisoning his friend, and Steve is diagnosed. 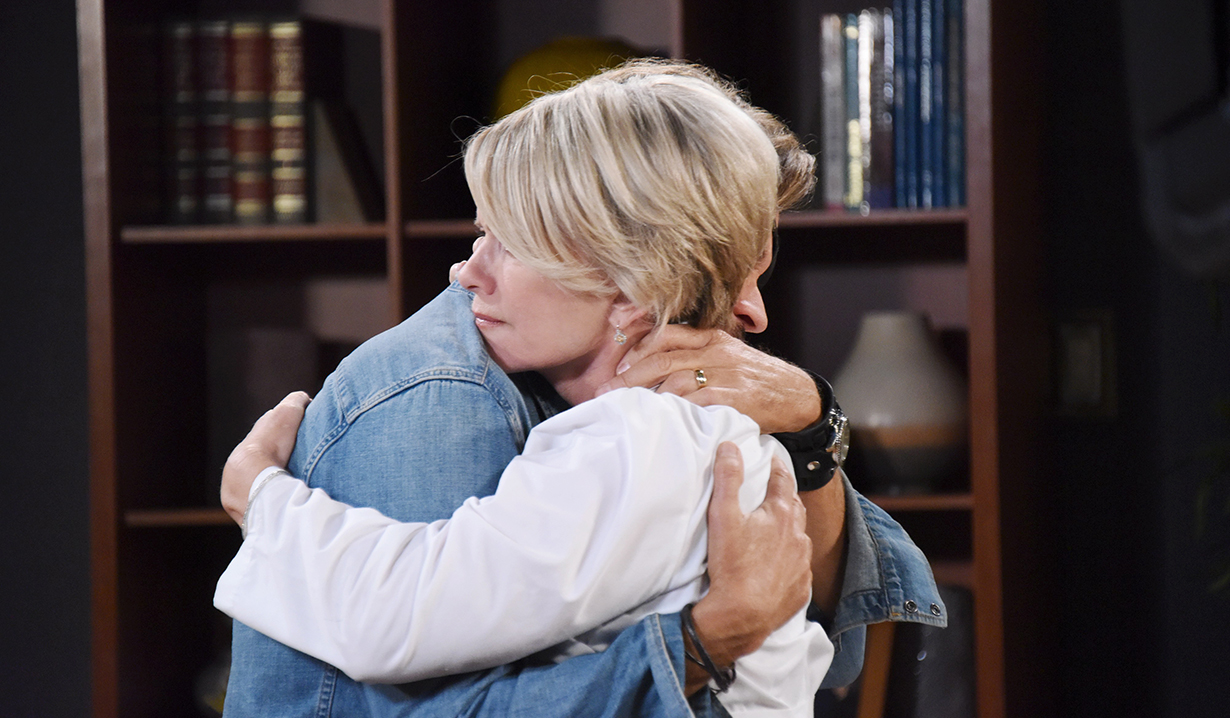 Victor surprises Brady in his bedroom at the mansion to discuss “that harlot that you’re sharing your bed with.” Brady says Eve doesn’t completely trust him yet and Sonny almost screwed things up for them. Victor suggests he romance her and get her to fall in love with him – without falling for her. Brady assures his grandfather that he’s done with love. He asks if he’s running around scheming for him for nothing, or is he really planning on making him CEO again. Victor says if he’s sober. Downstairs, Eve learns that Will gave Sonny divorce papers but thinks it’s wrong of him to contest it. He’s fighting a losing battle. Sonny sniffs that she’s no relationship expert and assumes for her, marriage is a fad, but for him, it’s sacred. What’s more, he doesn’t think Eve’s even capable of love. Eve calls her marriage with Eduardo the real thing. She says she and Frankie Brady were in love, too. Sonny asks what happened. “Life happened.” Sometimes love fades. Sonny questions her relationship with Brady. She calls it sexual in nature and hopes one day she’ll have a real marriage again. Sonny thinks she’s wasting her time with Brady who is using her. “Maybe I’m using him,” she retorts, and insulted, takes off. Later, Sonny finds Victor with his divorce papers. He grouches, “Why didn’t you sign these? Need a pen?” Sonny explains he wants to fight for his marriage. Vic urges Sonny to let it go so he signs the papers. Upstairs, Brady finds Eve and wants sex. She suggests it’s over so Brady thinks fast. He confesses he’s falling for her and wonders if she’d date him. Eve’s incredulous.

More: Up-to-date-spoilers for all four soaps

In Will’s room at Martin House, Paul begs Will not to tell Marlena that his father’s poisoning Steve. He needs time to check into it. Will agrees, then makes a call.

John stares at the vial of poison at the pub. Marlena arrives, thrilled to have dinner with her husband but notices he’s in a mood. John shrugs it off, blaming a case he’s on. Will calls and Marlena agrees to drop by his place later – alone. They disconnect and Marlena shares news that Kate’s not doing well. They talk about how she fell for Andre, who she agrees had changed. When John’s still distant, Marlena questions him further and learns he has a problem he needs to solve but doesn’t know how. He is about to explain something…

In Kayla’s office at the hospital, Steve tells his wife that Dr. Shah diagnosed him with a chronic autoimmune disease that has no cure. Kayla will call the Immunologist. Steve says the silver lining is that he sees how precious life is. They hug and she asks him not to get ahead of himself. He knows his symptoms can be taken care of with medication and they have to wait for his bloodwork to return. Steve doesn’t want to be a burden but Kayla promises that won’t happen. They kiss.

Tripp walks into the loft to hear Ciara and Claire yelling at each other over Claire hogging the video chat with Theo. Tripp can’t take this anymore and tells them this must stop. He thinks they’re both missing Theo and urges them to connect over it instead of going at each other’s throat. They start up again until he yells, “Enough already.” He tells them to shut it until he’s in his room with the door closed. Tripp returns later and the gals apologize for their behavior and are hopeful for a fresh start. Tripp grins. They play video games and Claire goes off to bed, leaving Ciara to point out that he’s still into their fair-haired roommate. She identifies with the unrequited love.

Back at Martin House, Paul’s angry that Will called Marlena. Paul needs to know the facts before he confronts his dad and again asks Will to keep quiet.

Back at the pub, Marlena interrupts John when Carrie calls. Marlena learns about Roman and Anna’s arrest. John realizes Roman’s alibi was bogus and admits he and Steve think Anna’s possibly being set up. He kisses Marlena and she goes. John looks pained. Steve and Kayla arrive and tell John the bad news. Again, John looks pained. He’s sorry, and rubs Steve’s shoulder. Steve hugs him. They leave while John goes outside and smashes the vial in anger. Marlena arrives at Martin House. Paul hides while Will tells his grandma he gave Sonny divorce papers. She asks to enter but he claims he’s tired. She still has concerns that he moved in to be closer to Paul. Will knows it’s futile to pursue someone who is in love with another. Marlena leaves and Will’s clearly embarrassed at what Paul overheard. Paul laughs it off and Will begs to help find out what John’s up to.

Rafe finds out Ciara’s not the only one who knows his secret.