Monday January 29, 2018: Rafe, Eli and Hope watch the footage from DiMera the night Andre was killed, Stefan tells his mama he covered their tracks, and Gabi hears about Lani's pregnancy. 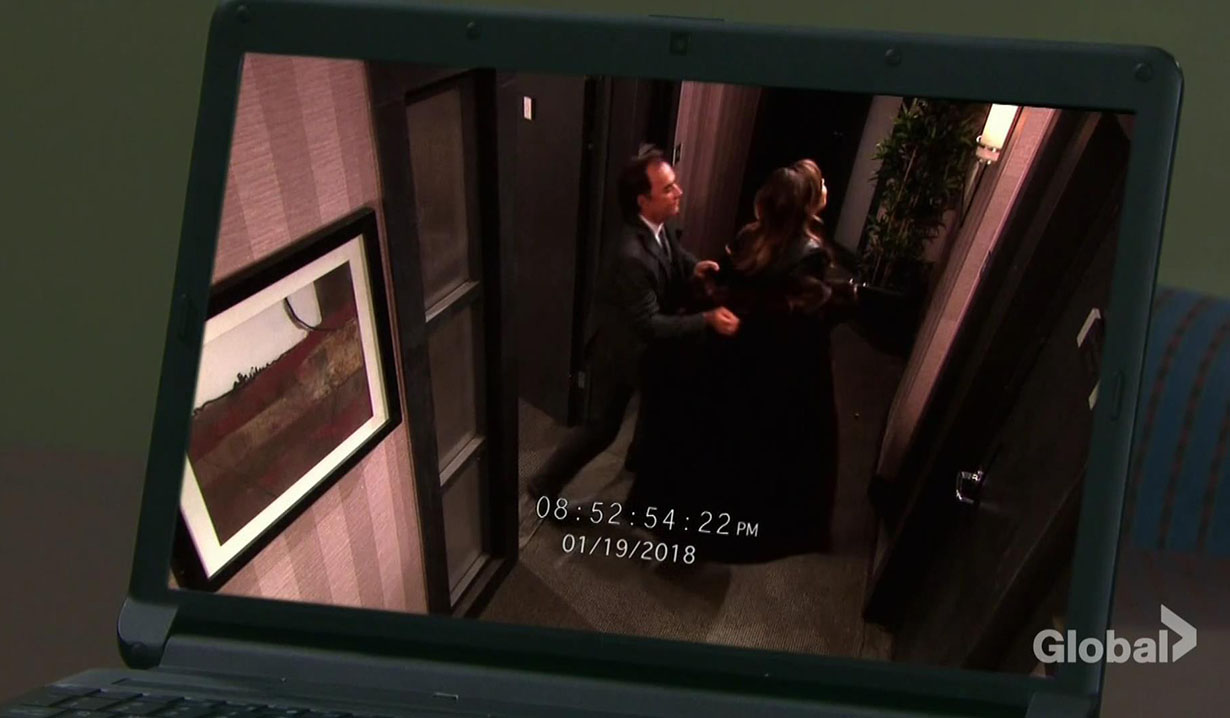 JJ drops by SPD looking for Lani. Hope says she’s under the weather due to her pregnancy so she left. JJ’s agog that Lani told her. Hope hugs him, happy for them. JJ’s over the  moon but thought he’d be in a better position before he had kids. He asks Hope to watch out for her. Hope will but states that Lani wants to stay in the field. He knows. He’s still job searching. Hope offers a recommendation. They embrace and Hope gets back to work. In the interrogation room, Eli and Rafe continue to watch video footage of Andre’s office at DiMera. Vivian’s at the top of their suspect list. Next they see Gabi enter Andre’s office. Rafe asks if he should recuse himself. Eli says no, once they see Vivian leave. They watch Gabi leave moments later and pound the wall with her fist. The next person who goes into Andre’s office is Kate. When she leaves, Andre follows and they tussle in the hall, appearing as though Andre’s trying to calm Kate down but she angrily leaves. Later, Anna shows up with Tony’s urn. Rafe shakes his head. He knew Roman and Anna were lying about her alibi. “Now we have proof.” They call in Hope and show her the footage of Anna arriving and leaving Andre’s office. Footage ends at 9:48 PM. Rafe calls this ‘too neat’.

Gabi meets Lani in the park. Lani struggles with tears and Gabi comforts her. Lani explains, worriedly that she’s pregnant. Gabi reminisces about her own pregnancy and touts the joy of being a parent. Lani’s comforted. They talk about JJ’s suicide attempt and how Lani’s grateful to Gabi for helping him. Gabi’s glad to have been there for him and gushes about Lani and JJ’s happiness. Gabi asks if she got that earring from Eli that she lost in his room. Lani did. Gabi laughs and admits she was jealous when she first found it but calls Eli her rock since her firing. Lani’s happy. They take off to SPD together.

Vivian wanders into the DiMera lounge and babbles about the police showing up. Stefan tells his mother that SPD had a warrant to search DiMera’s security footage. Vivian yells, “Are you out of your mind?” She thinks the footage will implicate them. Kate appears and is immediately on edge, seeing Vivian. She stomps off and Stefan tells Vivian to keep her big mouth shut or they’ll both be in trouble. Vivian’s worried that SPD will see them on the video. Stefan reminds her they work at DiMera. Of course they’ll be seen. “What is our innocent reason for being in his office with his dead body?” Viv queries. Stefan says not to torment herself. He made sure the cops will never see them on that footage. He shut the security cameras down before they went to Andre.

More: Three arrests on Days of our Lives

At the pub, Anna whines about Tony (the urn) being at SPD in lockup. “If he had to be a murder weapon, at least he looked his best,” she gloats, recalling shining the urn before the murder. She blurts that she’s happy about Andre’s death. Roman tells her to keep it down or her words can be misconstrued. She thanks him for standing up for her and worries upon hearing John’s working at finding out who sent her the mystery letter. When she hears that Roman has given John the go ahead to consult with Steve, Anna is vexed even more, considering she shot at Steve in Prague. Roman sighs and tells her not to worry. Kate arrives and makes a beeline for Anna. Kate thought she’d be in custody by now. Roman says to back off. Anna didn’t kill Andre. Hope, Rafe and Eli arrive. They tell Roman and Anna there’s proof that they lied about their alibi. They need to go down to the station. “Read them their rights,” Hope tells the cops. At the square, John drugs Steve’s drink as Steve reads Anna’s mysterious letter and discusses the case. Steve tells his friend they’ll get to the bottom of this. “You can count on it.” John knows. He checks his phone and has an appointment. Once he’s gone, Steve tries to read the paper and tosses it aside when he can’t.

John goes to the park and calls someone. He needs another dose. He gets snippy as he listens for a moment and says no, he doesn’t think it’s crossed Steve’s mind that he’s being poisoned by his best friend.

Lani and Gabi arrive at SPD. Gabi congratulates JJ on the pregnancy.