Friday January 26, 2018: Rafe and Eli get a search warrant for the DiMera mansion, Roman asks John to do something illegal, and forensics results are in. 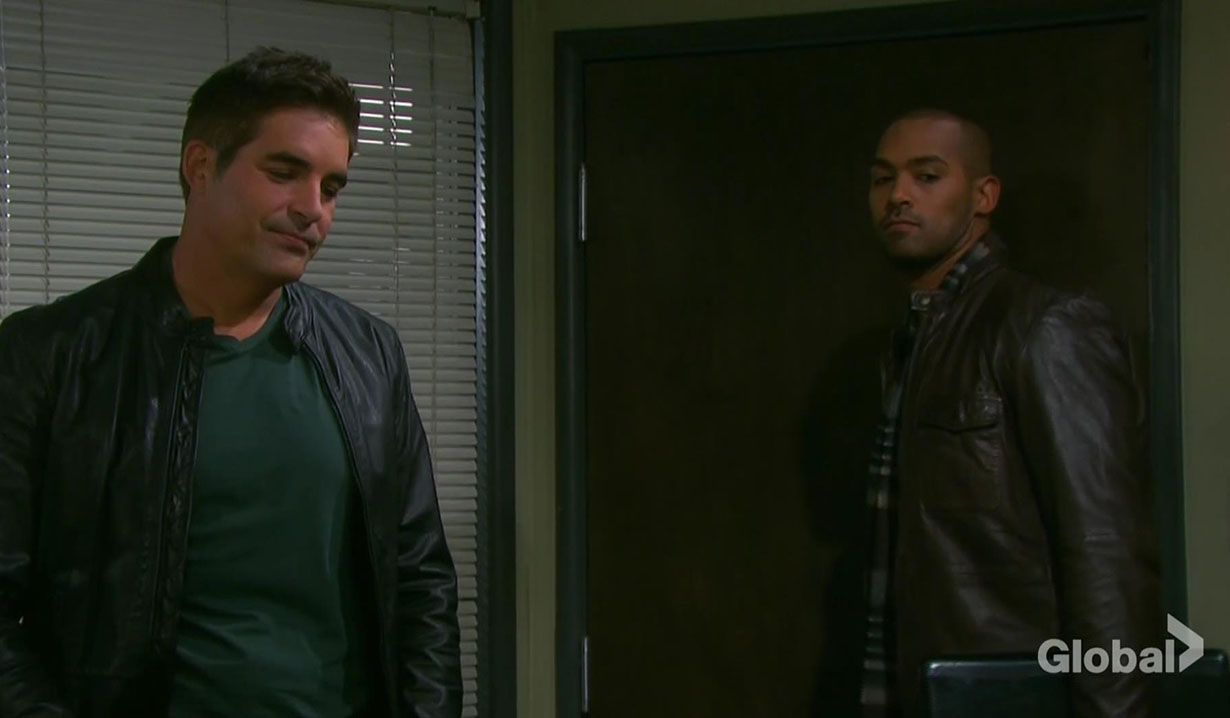 Rafe shows Hope the forensics results at SPD. The urn was most likely the murder weapon, the cause of death blunt force  trauma, but there are no fingerprints on the urn and they can’t tell if the ashes are Tony’s since DNA is destroyed upon cremation. They agree Anna’s still their prime suspect, unless she’s being set up. Rafe needs to get the search warrant for DiMera. Hope vows to try to carve out time for him later. They kiss and he goes. In the interrogation room, Lani lies that she’s been pregnant since mid-November but wasn’t aware until now. Eli doesn’t believe her. If this kid is his, he’ll step up. Lani comments that it’d mean ruining his relationship with Gabi. Eli doesn’t think she could handle that and doesn’t want to cause issues for her and JJ. Rafe interrupts to grab Eli so they can head to the mansion. The men leave and Hope walks in. She notices Lani’s crying. Lani discloses that she’s pregnant. Hope’s happy for her and they hug.

At the DiMera mansion, Gabi’s offended that Abigail asked if she killed Andre. Abigail’s sorry but she recalls Gabi threatened to. Gabi calls that a figure of speech. Abby wants to know if she has an alibi. Gabi turns the tables on Abby, wondering if she did it. Abs scoffs at that and denies it. She brings up Gabi killing Nick but Gabi says she was planning on suing Andre. Abby apologizes. In walks Stefan. Upstairs, Kate is ready to go to the funeral home. Chad can tell she’s been crying. She confesses she came to love Andre. Chad postpones their meeting at the funeral home and Kate’s thankful. She’s not ready. They open up about their mixed feelings for the man, reminisce about him and their confusion over why he fired Gabi. Chad worries about his wife who is taking this hard. For what it’s worth, Chad tells her Abigail says Andre really loved Kate. Kate also knows Andre loved Chad. They bond over their love-hate relationship with the man. They decide to have a funeral, though Kate wonders how that’ll turn out since most people hated Andre. Kate’s starting to feel like a black widow. Three of her husbands, Curtis, Stefano, Andre, have all died. Chad laughs. Kate says if Stefano’s really alive, now would be the time he came out of hiding. Chad calls the silver lining in this is that they’re back on track. They hug. Back downstairs, Gabi asks Stefan if he can overturn Andre’s decision to fire her but Stefan wants to wait to discuss it out of respect for the deceased. Eli and Rafe let themselves in and ask Stefan for the security footage and a log of those at the DiMera offices the night Andre was murdered. Stefan pressures the cops to let him know how long this will take. Rafe says it’s ongoing and everyone in the house needs to provide statements. The cops go and Gabi follows. Abigail asks him to reinstate Gabi but right now, Stefan wants to get a press release out. Abigail starts to cry and Stefan hugs her.

Tripp is surprised to see Steve at the square with glasses on over his patch. He starts to grin when Steve warns him not to laugh. Steve explains the optometrist found he had eyestrain. So far, the glasses are helping. Father and son catch up. It’s weird at the loft without Theo and the girls are taking it out on each other.

At the pub, John flashes to drugging Steve. Roman appears with Anna’s mysterious note and asks John to look into it. John can’t interfere in an open police case – Roman knows this. John counsels his friend to give it to the cops but Anna’s Carrie’s mother. He needs to protect her. Against John’s better judgement, he agrees to it. Roman figures it’s fine to let Steve in on it.

John finds Steve at the square and fills him in on their new case from Roman. Steve scrutinizes the letter as John drugs him again.

Eli and Rafe return to SPD with some video footage for Hope that they can watch from DiMera. Hope runs to a meeting with the deputy mayor as the men start to watch. They note that they didn’t see Andre’s phone in the room, yet he had it before he went into his office.

Gabi meets Lani in the park. Lani has news…