Wednesday January 24, 2018: Word of Andre's murder spreads around Salem, Paul's upset to see Will has moved in across the hall, Sonny accuses Brady of murder, and John hesitates after poisoning Steve. 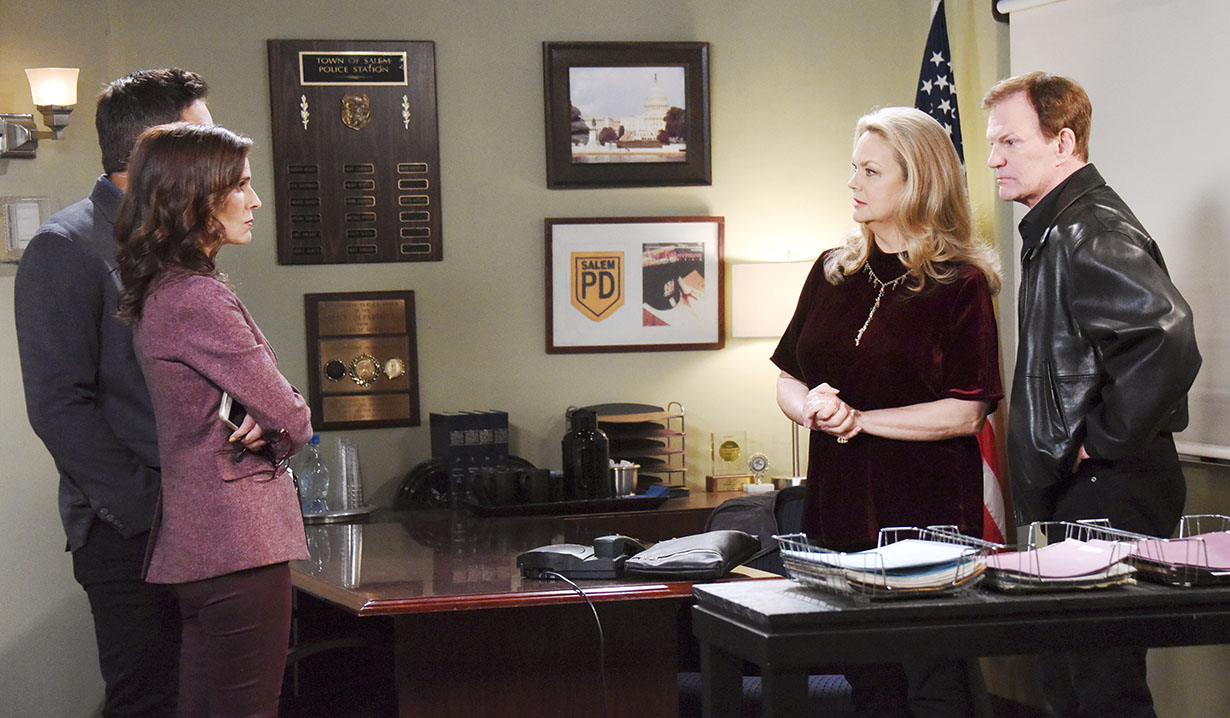 At Doug’s Place, when Steve and Kayla’s backs are turned, John slyly adds some liquid to Steve’s drink and gives it to Steve, who downs it. Kayla shakes her head at the men, and calls John a bad influence. Steve is amused but calls John a loyal friend. John mutters to himself, “I can’t do this,”  and is about to tell Steve and Kayla something when Marlena strolls in with news of Andre’s murder. Everyone’s surprised as she provides details. She pulls John aside and notices he’s distracted. He covers and offers to call Hope about the investigation. Marlena’s grateful and says everyone feels safer when John’s in town. Marlena tells him that Will’s considering taking a room at Martin House, likely to be closer to Paul. John’s too interested in watching Steve’s reaction to the drug and once again apologizes for being distant. Nearby, Steve almost collapses, and the women rush to his side. Steve’s vision is worse. John asks if he’s feeling better and Steve laughs. “What’s with that guilty look on your face?” The men joke about trying to drink the other under the table as the women look on, lips pursed. John and Marlena go and Kayla worries for her man.

Paul is surprised to find Will moving across the hall from him at Martin House. He thinks it’s a bad idea because of Sonny. Will asks if Paul’s the hall monitor. Paul assumes Will moved in just to be close to him. “What if I did?” Will wants to know, smiling. Paul becomes more uptight. Will admits he’s just playing. He needed his own space and this place is affordable. He flirts a little. Paul’s uncomfortable. Will feels a connection and thinks Paul feels it, too. He spent years denying who he is. Paul can identify with that. Will knows Paul’s still in love with Sonny and says it’s fine. He’d like them to be friends. Paul refuses to shake Will’s hand but helps him move boxes inside. Will asks if Paul will try to reconcile with Sonny. Paul doesn’t want to be anyone’s second choice. Will admires that. They go through his boxes and Paul finds a Tokyo Fab CD and grins. Paul loves this band. Will has a listen and likes them. He learns Paul has tickets to see them in Chicago soon. Will feels like he knew the lyrics, prompting Paul to say that music stays with you. They bond and Paul shakes his hand before taking off.

At the Kiriakis mansion, Sonny tells Brady and Eve he eavesdropped on their conversation and knows Brady killed Andre. Eve lets Brady toy with Sonny, and keeps a straight face as Brady confesses he did it. Sonny goes ballistic and calls Brady names before Brady urges him to call the cops. When Sonny tries, Brady takes his phone and starts to laugh. He calls Sonny weak and gullible. He explains that he was joking, testing Eve, when he said that. He didn’t kill Andre. Sonny finds it hard to believe. They argue and Sonny starts in on Eve. It’s only a matter of time until she’s sorry she got in bed with Brady. He leaves.

At SPD, Roman reminds Anna she was going to confess something to him. He asks Anna if she murdered Andre and says the police think the urn is the murder weapon. Anna says she was at Andre’s office. She starts from the beginning and discloses that she received a letter yesterday. She shows it to Roman who seems surprised and when Hope and Rafe appear, Roman lies that Anna couldn’t have killed Andre, because she was with him all day. Hope asks why he’s lying. Roman maintains his lie and calls their evidence circumstantial. He takes Anna away.

Outside the pub, Roman tells Anna they need to buy some time with the cops to find out who wrote that letter. She reads it aloud, “Dear Anna, you don’t know me but I thought it would interest you to know that Andre DiMera killed your beloved Tony who was at University Hospital the day he died. Don’t you think he should pay for that?” It’s unsigned. They wonder who would benefit from her going after Andre. Somebody watches.

In the square, Marlena and John discuss Steve’s ailment. John is positive Steve will be fine.

John Poisons Steve's Drink While His...

Survivor's Latest Casualty on 'What's Worth More Than a Million Dollars'