Friday January 19, 2018: Lucas is out of rehab, Gabi's angered after her firing, and murder touches Salem. 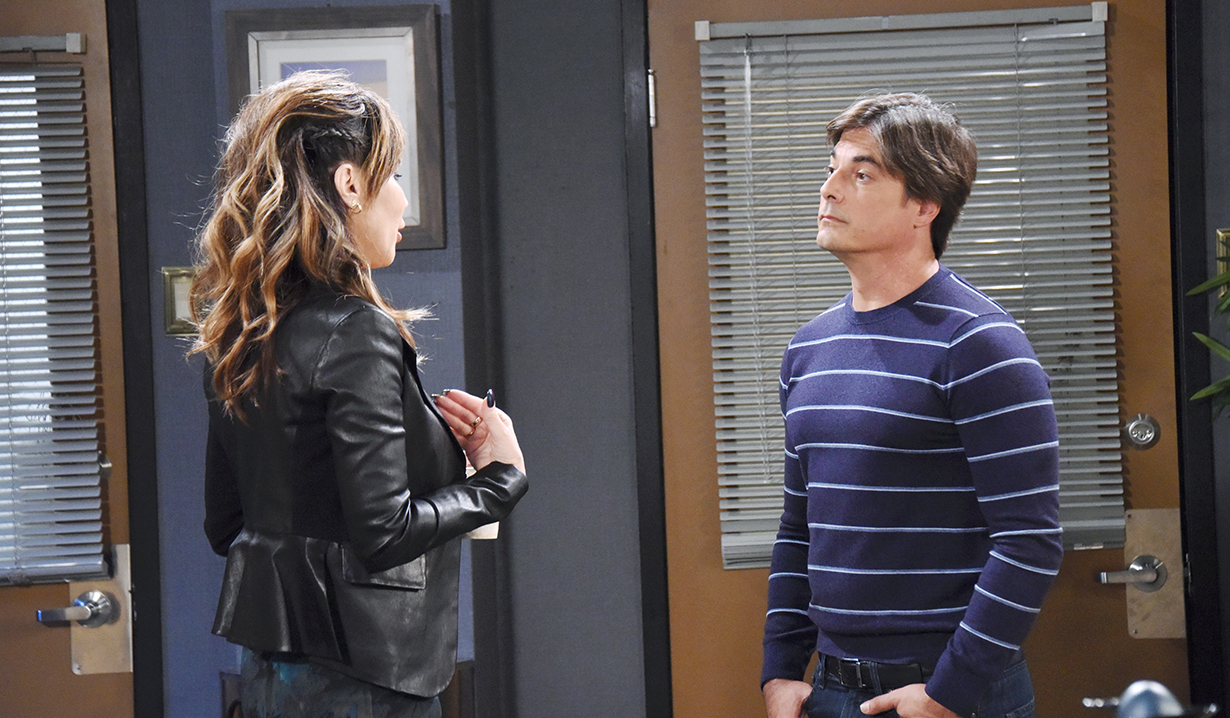 Kate impatiently waits at the hospital for Lucas, who finally appears, fresh from rehab, shaven and with a haircut. They embrace. Kate cries, grateful Lucas made it. It’s been a rough 28 days and he credits her and Sami for helping him. Kate shares that Will’s really acclimating and will be happy to see Lucas doing well. Lucas has been writing to him and is ready to resume living again. Kate will ask Andre if they can get his job back. As they catch up, Kate reveals she and Andre are a couple, though she won’t admit whether or not she loves him. Lucas says life’s complicated and messy and she deserves happiness. Kate’s moved.

At Doug’s Place, Chloe pays Brady some of her debt she owes him. Business is doing well. Chloe already asked Eve this and now wants to know – is Brady taking advantage of Eve? Brady asks, “What do you think?” Chloe wonders if there’s something special between them, even though it didn’t start that way. At the Kiriakis mansion, Eve tells Tate, (played by Colin & Kyle Schroeder), a story when Maggie appears to tell Tate that “Cook” made chocolate chip cookies. She takes the tyke into the kitchen and returns later, alone, to inquire if Eve really has feelings for Brady. Eve does, but can tell Maggie’s worried she’ll hurt him. Maggie goes and Eve calls and leaves Theresa a message to call her. Brady walks in and they discuss Gabi Chic.

At DiMera, Stefan and Vivian discuss possibly neutralizing Andre. Stefan can’t just transfer him. Vivian says to give him an office in hell. She wants to ensure Dr. Rolf or Dr. Woo can’t bring him back. Stefan argues that they can’t kill Andre. He refuses so she vows she will. Stefan won’t let her and makes her promise she won’t kill his brother. In Andre’s office, Andre fires Gabi for committing fraud. Gabi’s confused. Andre says Gabi Chic was paid for with Eduardo’s dirty money. Gabi’s so angry and flustered that she lapses into Spanish and tells Andre he can’t do this to her. He calls her a liability and angers her further by telling her she can’t take Gabi Chic with her. Gabi finds him a hypocrite. She tells him he’ll be the one to lose big today, and leaves.

In the park, Chad tells Abigail that Andre must be the saboteur after all. She doesn’t believe that and will prove it. Chad says John is working on that for them now. Chad won’t forgive Andre if it turns out he betrayed them. “He’s gone. He’s dead.” Chad goes and Gabi appears. She fills Abigail in on Andre firing her and swears she’ll kill him for this. Lucas arrives at Doug’s Place. Chloe’s happy to see him. Lucas thanks her for being there for him and asks her on a date. He knows it’s awkward since they were married in the past. Chloe considers it and accepts. They’ll meet in the morning to go ice skating.

Vivian arrives at home and tells Stefano’s portrait that Stefan’s too good for his own good. She received a text from Andre about Gabi’s firing and says she’s not the only one to be terminated.

Back at the office, Stefan flashes to his mother’s request to kill Andre and makes a call, telling someone he has a job for them. Kate visits Andre at his office. She shares good news about Lucas being out of rehab. After speaking to him, she realizes she does love Andre. He has longed to hear this but hopes what he has to tell her doesn’t change how she feels.

Lucas returns to Doug’s Place for his date with Chloe, in the morning. She’s sorry, she has to leave today for two months, to sing in an opera. Lucas is happy for her and agrees to a raincheck.

Gabi sits on a park bench trying to catch her breath as she reads about a delay with the IPO in the news. Eve and Brady wake up in bed together at the mansion. Brady reads about the IPO delay.

At the DiMera mansion parlour, Kate’s upset. She and Chad agree they had a rough night last night. Meanwhile, Vivian enters Stefan’s room, demanding they get their stories straight.

At DiMera, Abigail goes into Andre’s office and gasps upon seeing Andre, dead on the floor, with a pool of blood under his head. She sobs.

Abigail Keeps a Secret From Salem...