Thursday January 18, 2018: Kate's upset that she didn't get to say goodbye to Theo, Roman decides it's time Anna talk to a psychiatrist about her grief, and Vivian's eavesdropping has her worried. 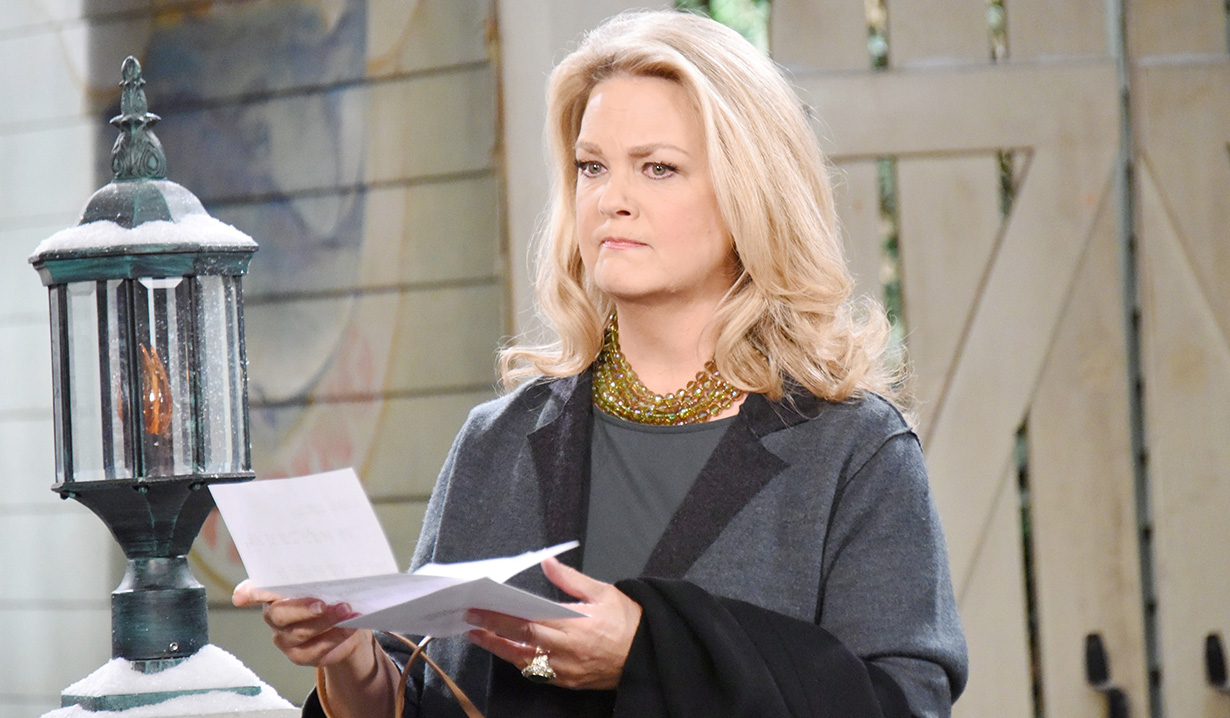 Vivian leaves Stefan’s office at DiMera while Gabi and Abigail admire how each other kicks ass in Gabi’s office. Stefan interrupts and Abby hands over the first draft of the press release regarding the acquisition of Gabi Chic. He wants to discuss this over dinner. Abby declines but he clarifies that he was talking with Gabi. He wants to get to know her better. Gabi’s shocked. “Are you seriously asking me out on a date?” She refuses and lets him know she has a boyfriend – a cop. It’s awkward. Stefan wouldn’t want issues with the police. Gabi takes off and Abigail asks what in the hell is wrong with Stefan. He’s confused. She accuses him of sexual harassment. He finds that an overused word in USA and insists people get involved in the workplace all the time. When she suggests he attend the sexual harassment workshop, he assumes she’s only angry because he’s not sexually harassing her. Abby smacks him across the face and wishes she had a baseball bat instead. She doesn’t like cheesy innuendo. He apologizes. She warns she’ll be watching him.

More: Gilles Marini to Days of our Lives

Anna walks into the pub, muttering about Andre going free while Tony is dead. Roman says they’re having fun together. Does she want to let Andre spoil that all? Anna doesn’t. She asks for silver polish to polish Tony’s urn. Roman’s patience wears thin and when Marlena walks in, he acts surprised. Anna apologizes to Marlena for the last time they spoke. Roman says, “Has it occurred to you that some people might find a funeral urn a little grim?” People may not want to look at a dead man’s ashes while enjoying some clam chowder. Anna doesn’t think of them as ashes. “Besides, he liked the chowder here.” Marlena muses that Tony might want to be free. Anna starts talking about the past again and Marlena asks if she and Tony had a special place they were fond of that she might want to scatter his ashes in. Anna looks pained. Roman says that their vows were from death do you part. Anna realizes this is a “stealth therapy session.” Anna wishes Roman would have told her to her face she needed therapy, so he does. Marlena offers to give her a few therapist’ names and she lashes out, telling Marlena to leave her and Tony alone. Marlena apologizes and goes and Roman says he’s sorry as well. Anna can’t be with someone who doesn’t accept her. Roman’s sorry to hear that. She goes outside and finds a letter in her purse she’s never seen before. “Oh my God,” she exclaims, as someone watches her from nearby.

More: Roman acting out of character on Days Andre finds Kate in Theo’s room at the hospital. Andre’s learned that the DiMera jet just took off. Theo’s gone. Kate can’t believe Abe didn’t let them say goodbye. Abe still blames her for this mess and she blames herself. Andre doesn’t. He blames himself for giving her so many reasons not to trust him. He ruined the trust he built with her and Chad. They embrace and talk about Lucas getting out of rehab today. Andre tells her to go be with Lucas and they’ll visit Theo in South Africa soon. He goes back to the office. “I love you Kate,” he says. She’s about to reply but he tells her there’s no need. “I just wanted you to know.”

At the park, Vivian eavesdrops as John tells Chad that it won’t be long until they get proof that Stefan was the one who sabotaged DiMera Enterprises. Vivian is so concerned she drops her purse. Chad hears a noise and runs to see who is there. He grabs Vivi and takes her to John. She covers that she was examining the foliage. She greets John. She still thinks of him as her nephew. Wasn’t his father Yo Yo Ma? “Yu Ling,” John says. She invites him to dinner sometime and goes, leaving the men to wonder what she heard. Later, Chad calls Abby to meet.

Andre goes to his office at DiMera with Vivian following. She tells him what she overheard between Chad and John. She says they’re closing in on Andre and he has to get them to stop. He can’t. She mentions Gabi Chic launching tomorrow. Gabi turns up and Vivian tells her how impressed with Gabi she is. She goes and Andre calls Vivian a nightmare. Andre thinks her company could generate millions but she won’t be sharing in the profits. Gabi’s shocked as he fires her. Vivian goes to Stefan’s office and tells him Andre’s becoming too much of a liability. “We’ll have to neutralize him, permanently.”

John meets Marlena at the park. He fills her in on seeing Vivian. Nearby, Chad fills Abby in on everything pointing to Andre.

Theo Says a Tearful Goodbye to...