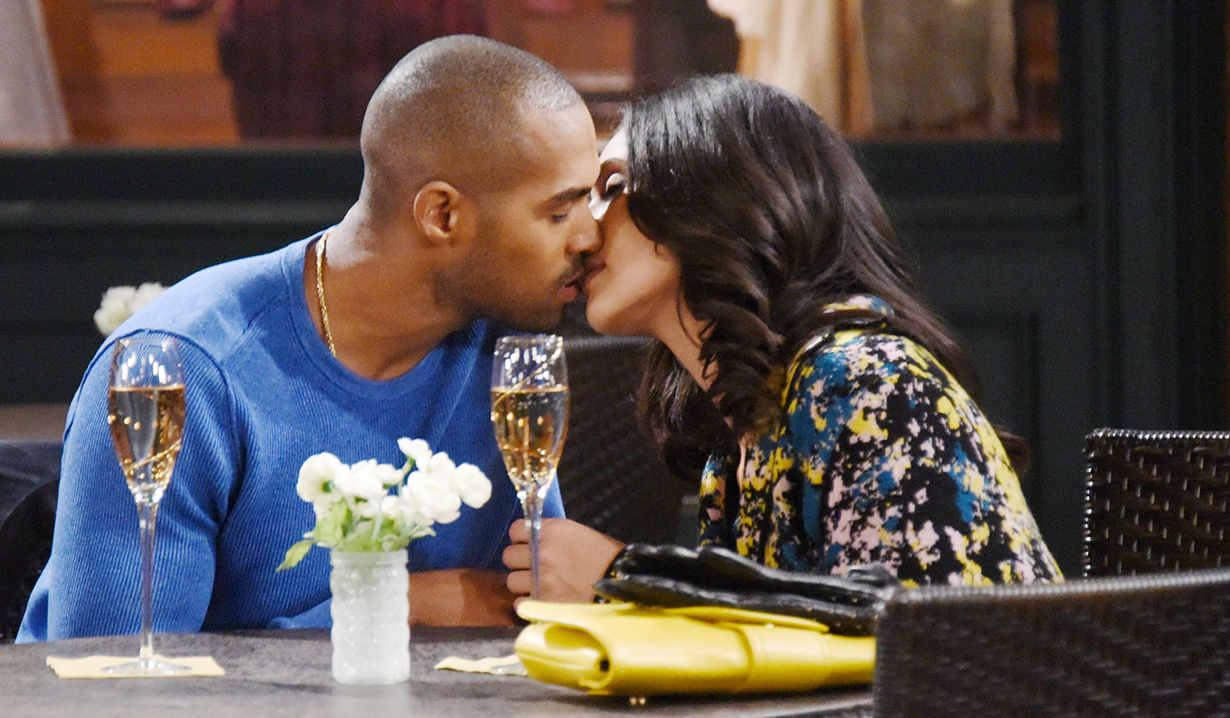 t the pub, Eric asks his father if he and Anna are getting serious. Roman doesn’t get much of a chance to respond when Anna arrives. Roman asks her to take a walk so he can discuss Eric’s love life with him. She goes and Eric talks to his dad about Jennifer dating a doctor. He thought they were trying to make things work again. Roman asks his son to hang in there and up his game. “Turn on the charm.”

At DiMera Enterprises, Andre asks Kate to celebrate signing Gabi. Kate’s mildly annoyed that Stefan will get the accolades. Meanwhile, Vivian visits Stefan to let him know that Chad has hired a private investigator to find out if he’s being played. She brings up Andre. Stefan has grown tired of him. Vivian says they need Andre. She’s playing the game but at some point is sure Andre’s time will come. In Gabi’s office, Eli wants to treat Gabi to dinner tonight. In Stefan’s office, Vivian reassures her son that they have Andre where they want him. “I showed him something shiny, put a carrot on a stick. He was eating out of the palm of my hand. Oh dear, I think I’ve mixed my metaphors,” she says. Stefan finds it amusing. Andre and Kate arrive and the women hurl insults at each other and then Kate leaves with Andre. Vivian gives her son an old watch of Lawrence’s. Stefan is touched and puts it on. Vivian recalls her time with Lawrence and how he sought her when she was lonely, just like Stefan. Vivian has alienated those she has loved and is grateful to have him in her life. They embrace.

At SPD, JJ calls the decision of what to do about the baby Lani’s decision but tries to convince her to keep their baby. Lani flashes to sex with Eli, knowing it’s impossible that JJ’s the father. She tells JJ this is more complicated than he thinks. Jennifer interrupts and Lani dries her tears. JJ tells his mom he quit SPD because he never wants to be put in the position of possibly killing someone again. Jennifer is supportive. She takes off for a date and tells Lani she’s glad that they’ve worked things out.

Anna comes upon Jenn in the park. Anna’s waiting for Eric and Roman to finish a discussion before they go out to Doug’s Place. Jenn presses and learns Eric and Roman were again discussing Eric’s women troubles. She’s introduced to Dr. Shah when he shows up for Jenn’s date. Once Anna is gone, Henry invites her to Brady’s Pub for the best clam chowder in Salem. Jenn cringes slightly. She’s been there once or twice. At Doug’s Place, Kate rants to Andre about hating Vivian. She tells him stories about the past nasty things Vivian did to her and he tries to take her mind off of it with champagne. Anna appears and starts in on Andre for ruining her life with Tony. Andre’s sorry and says he was a different person then. Kate defends Andre. He has changed. Sometimes he reminds her of Tony. Anna doesn’t get it. She hopes that someday Andre will get what’s coming to him. Kate asks “Annie Oakley” to toddle off to her own table.

Jennifer and Henry arrive at the pub. Roman quietly teases Eric about how handsome Henry is and then goes. Eric takes Jenn’s order and is excited to learn Dr. Shah will be working at the Center. He sits with them and says his wife must be very understanding about all those long hours. Henry’s single. Eric’s jealous. When Eric leaves with their order, Henry questions if she and Eric had something going on. Jenn claims they’re just friends.

JJ takes Lani to the Horton plaque to show him what love and family means to him. He vows never to push Lani away again if she’ll give him another chance. Eli and Gabi briefly say hello and as they walk off, Eli invites Gabi to spend the night at his house. They go and Lani lets JJ think the baby is his and wants to keep it.

Roman approaches Kate’s table at Doug’s Place. He hopes he hasn’t missed all the fun. Anna snuggles into him and Kate rolls her eyes. Anna issues a last warning to Kate to be careful because Andre will hurt her.

Gabi and Eli go back to his room at Horton House and decide to take things to the next level and make love.

In the park, JJ tells Lani she’s not alone in her pregnancy and he’ll support whatever decision she makes.

Brady Chokes Vivian When She Gloats...