Brady Chokes Vivian When She Gloats Over Signing Gabi Chic 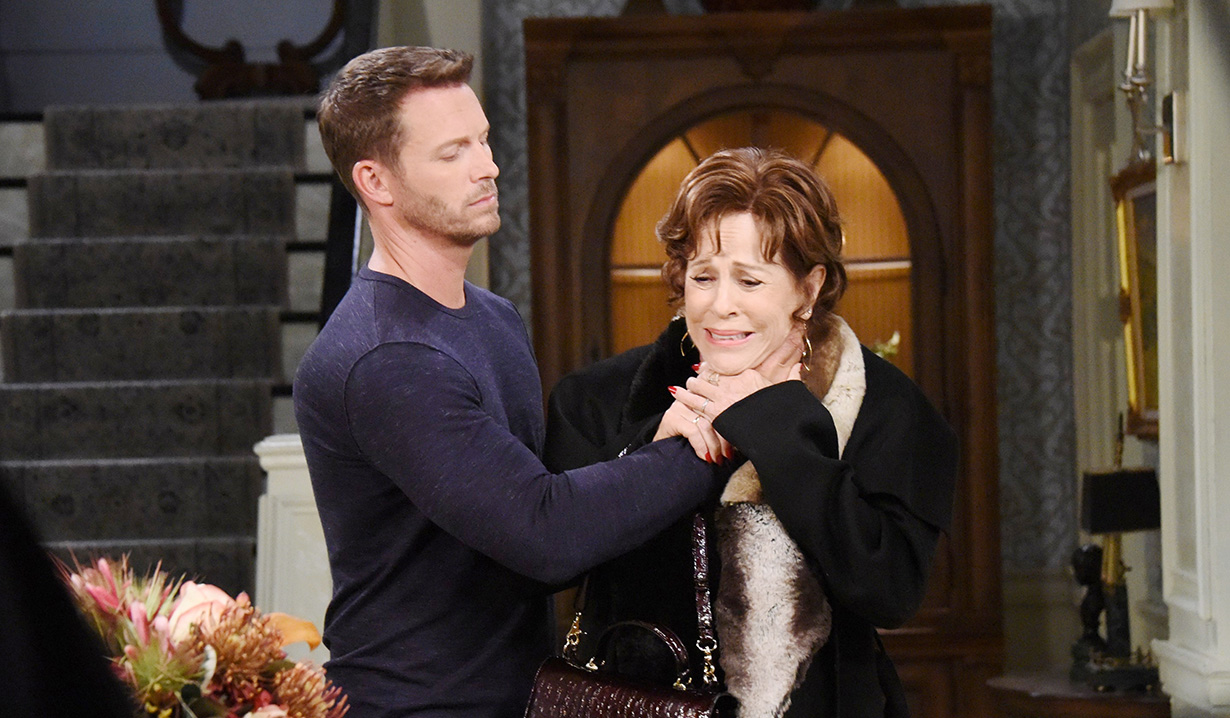 Abigail runs smack into beardless Chad outside Stefan’s office at DiMera Enterprises. They discuss getting “this fraud” out of the boardroom and bedroom. Abby knows she has to think he’s winning her over so he doesn’t suspect anything. Chad likes that idea and kisses her. She heads into Stefan’s office. He asks if the company needs a policy on PDAs. She scoffs at that and calls him out for dealing business in the nude and visiting her when she was in a towel. He assumes it made her hot and bothered. He asks if she told Chad. “Why would I?” she asks. He wonders why and she tells him it’s none of his business. Stefan could use her skillset and wonders what sort of furniture to get for the office. She’s not his secretary. He wants a press release sent out. Abigail’s having a tough time with it and insists they need to worry about damage control, first, considering the investors have concerns. Meanwhile, Chad walks in on Kate and Andre kissing in Andre’s office. Chad’s ready to move on from blaming Kate for Theo’s predicament. He blames Vivian and Stefan now. In another office, Eli visits Gabi with flowers. She hopes she made the right decision, signing with DiMera. He asks why she did. She states that Kate convinced her. They discuss how he’s a little jealous of Chad and Gabi says he has nothing to be jealous of. He flashes to the entire sex scene with Lani and back in Stefan’s office, Abby finds it hard to humanize him. He’s a blank slate, other than his business takeovers. She read he’s a great chess player like his father. Stefan asks if he’s similar to Stefano. Abs says he’d better hope he’s not. Stefan rattles off Stefano’s wonderful qualities but Abby calls Stefano evil to the core. Stefan calls her insensitive and she apologizes. She goes on to confirm he likes curling and his favorite color is taupe. It doesn’t give her much to write except to say that he’s a real jerk. She asks for more information so he explains that he was dumped in an orphanage, adopted and sent to the UK for boarding school. He adopts a British accent. He says he wants to get to know his family but Abs thinks he has a funny way of showing that. He cracks jokes about playing Quidditch (a game from the “Harry Potter” books and film) and keeps it up until she finally laughs. He calls her smile beautiful just as Chad walks in. Chad doesn’t like Stefan talking to his wife that way. Stefan changes the topic to hoping they work well together. The men shake hands. Later, Kate walks in on Eli and Gabi making out. She just wanted to ensure Gabi didn’t have any second thoughts. Gabi insists life couldn’t be better.

Eve and Brady make out in the foyer of the Kiriakis mansion. They decide on sex until the doorbell rings. Eve thinks the pest control is there. She found a massive spider in her room. They open the door to Vivian. “What a revolting surprise,” Brady snipes. Vivian gloats that Gabi Chic signed with DiMera and tells them to get used to losing to them. She and her son will bring them to their knees. She remarks that it’ll be like old times for Eve, who was once a prostitute. Brady vows to stick Vivian back in the sarcophagus and when she speaks up, he grabs her by the neck and squeezes and then finally kicks her out.

At SPD, JJ overhears Lani talking to Kayla about making a decision about her pregnancy. JJ’s thrilled but says it sounds like she’s going to abort. Lani calls this decision difficult. She’s sorry. She wasn’t going to tell him. He thinks it’s because she didn’t think she could count on him but that’s not it. JJ loves her and wants to be with her. She loves him but though she wants kids one day, she isn’t ready.

Vivian arrives at DiMera and goes to Andre’s office. She calls John Black a fool but Andre’s worried that he’ll find out they’re in cahoots. He tells her to go. They need to act as if they hate one another. Vivian leaves and goes to her son’s office to yuk it up over them playing Andre.

Vivian and Stefan discuss their plans for DiMera Enterprises. 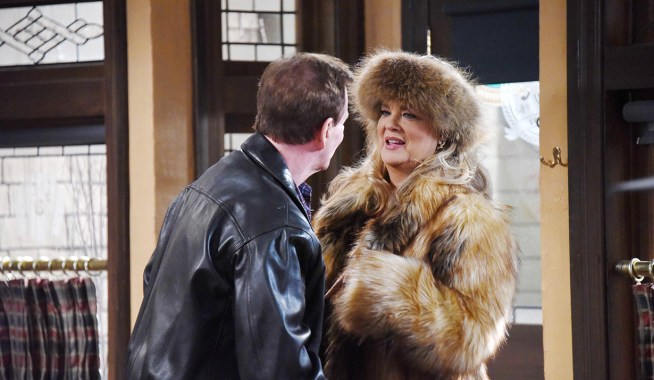 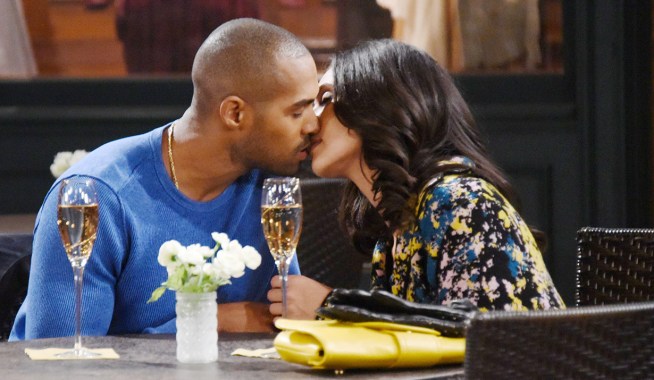