Thursday January 11, 2018: Anna wants Steve's help in finding Stefano, Brady details to Victor his plans for Eve, and Lani cries to Eli over their sex romp. 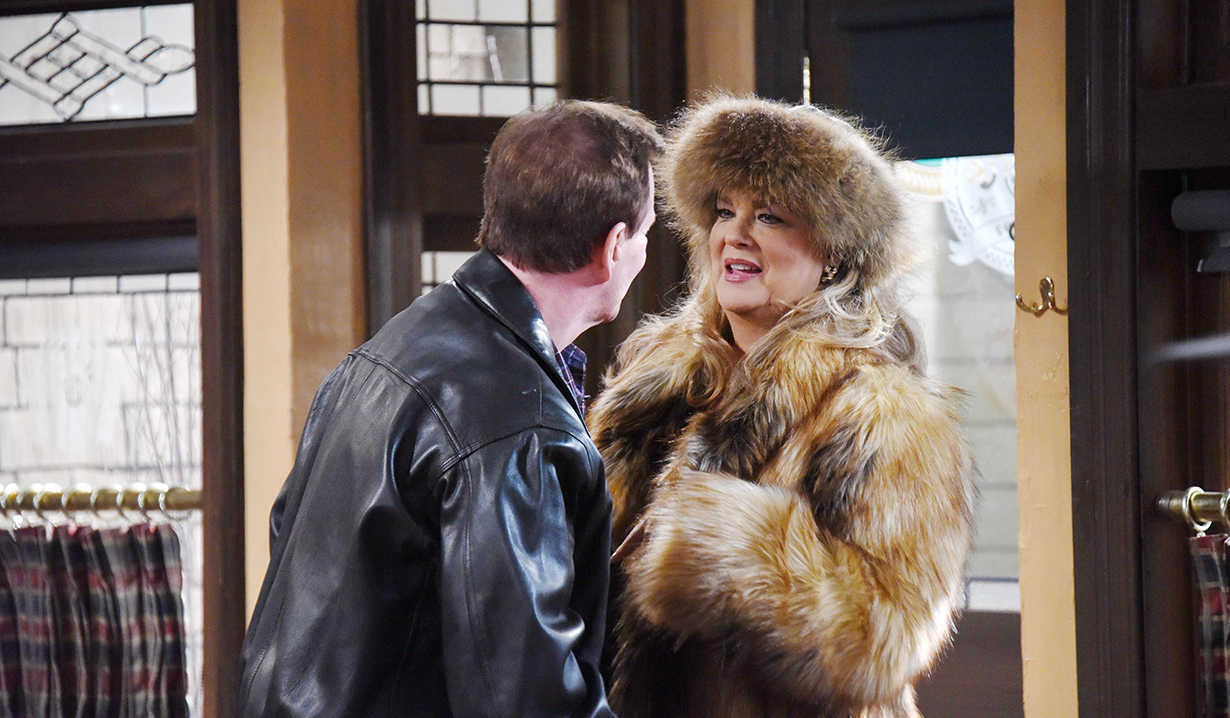 At the pub, Steve hides his blurred vision from Kayla. Anna and Roman appear, having been ice skating. When Anna goes to the powder room, Kayla voices concern that he is with Anna since she shot Steve. “Nobody’s perfect,” Roman says, surprising them both. Steve asks if Roman has checked her purse to see if she’s packing. Anna returns with Tony’s urn and places it on the table. Roman thought they discussed this. Anna only lugs him around when it’s appropriate. She gets anxious and says it’s a way to cope. “You just bring him out for special occasions,” Steve says. Anna calls it a reminder of what Stefano did to them. Kay tells her to let it go and reminds her of Europe. Anna can’t help it. She wants to hire Steve to go after Stefano and bring him to justice. Steve rolls his unpatched eye. Stefano was quite ill and is probably dead. Anna flashes to the last time she saw Stefano in jail and didn’t think he looked sick. Steve flashes to knowing it was really Shane Donovan in a ‘Stefano suit’. Anna shows him a photo in Turkey of Stefano and Steve recalls Shane admitting the other man the ISA was following in Europe while Shane was pretending to be Stefano could have been the real Stefano.

At the Kiriakis mansion, Victor asks Brady if he has “that piece of garbage” out of their lives yet. Brady calls her needy and desperate for attention. He wormed his way into her heart. Victor calls this a dangerous game and even the most confident players get played. Brady plans on marrying Eve and taking her for everything she has. Victor doubts she’ll marry him without a prenup. Brady is confident things will go his way. Victor suggests they may have to kill her if this doesn’t work, then dangles the possibility of Brady returning to the CEO position at Titan.

Chloe sees Eve at Doug’s Place. Eve wants to explain why she and Brady were having sex. Chloe asks if she has an agenda and is using Brady and Eve wonders if this is coming from a place of jealousy. Chloe denies that. Brady’s her friend and he tends to make bad choices. Eve says maybe Brady is using her or Victor’s ordering him to. Chloe asks why she’d do it then. Eve calls him sexy and strong and admits she’s a little lonely. But she’s not stupid. JJ arrives at Hope’s office at the police station to tender his resignation. He hands over his gun and badge. He never wants to be in the position to shoot someone again. He wants to do something else with his life. Hope’s proud of him. Once he’s gone, Hope calls Steve to come look at a case for her. Outside, Eli notices Lani has a panicked look on her face and questions her. Though she’s thinking about her pregnancy, she tells him about Theo going to South Africa for rehab. Eli assumes this is for the best. They discuss their Christmas romp in the sheets and Lani tries to remember what led to it. Eli doesn’t get what the point is analysing it. He calls it a mistake. Lani cries. He apologizes. He doesn’t want to beat themselves up over it. This goes on for a while.

Back at the pub, Steve gets off the call with Hope and asks Kayla for a ride to SPD. Anna asks Steve to reconsider going after Stefano. He nods and they go. Anna mourns Tony and Roman tells her he knows Tony will always be a part of her life but he’d want her to move on. She tears up and nods. He goes to get their food and she tells the urn she’ll never let this go until Tony’s been avenged. Back at the Kiriakis mansion, Brady gets a text that Eve has returned. He and Victor stage a fight about her where Brady defends her and when she arrives, she eavesdrops. Brady leaves and runs into her. He apologizes for whatever she heard and she kisses him.

Steve arrives at SPD and Hope hands him over a file. She asks him to read it and she’ll call him later with his thoughts. She leaves the room and it’s too blurry to read. In another room, Lani calls Kayla. JJ walks in as she says she’s made a decision about her pregnancy.

Stefan Gets Under More Than One...

Brady Chokes Vivian When She Gloats...