Wednesday January 10, 2018: Kate has to convince Gabi to sign with DiMera, Steve has the same symptoms of blurred vision, and Lani takes in the news that she's pregnant with Eli's kid. 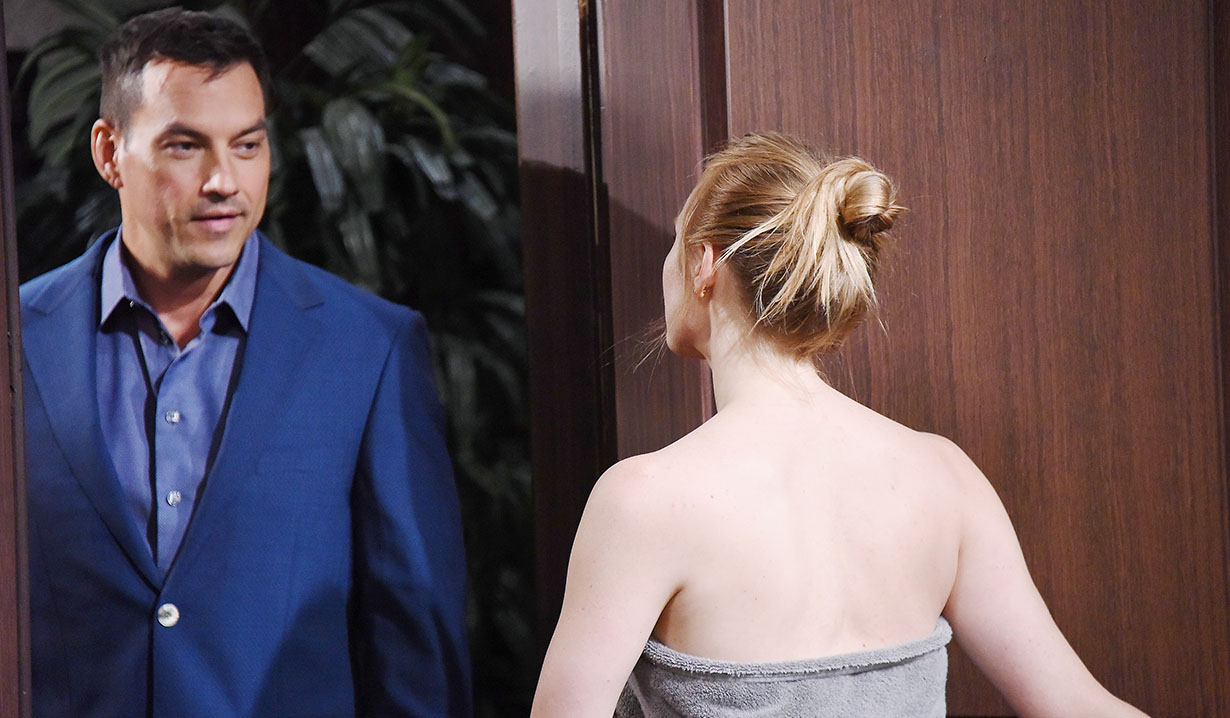 Steve sits on the bench outside the pub with blurred vision, wondering what is going on. He heads in and sits with John and makes light of his symptoms. John whips out his reading glasses and thinks Steve needs some. Steve says perhaps a monocle. John hands over a new case. They discuss their children and John heads out while Steve still can’t see properly.

At the hospital, Lani shakes as she digests news that she’s a few weeks pregnant. Lani begins to cry and Kayla offers to lend an ear so Lani blurts that it’s not JJ’s. She shares the whole sordid story of revenge sex without using protection. Lani sobs that she loves and wants to be with JJ. She doesn’t want to have this other man’s baby. Kayla suggests other ‘options’ and Lani mutters, “Abortion?”

JJ meets Eli at SPD. Eli apologizes to JJ for his reaction to learning that JJ was found by Lani in bed with Gabi. JJ’s doesn’t know what he’s talking about. Eli hopes JJ and Lani will find their way back to each other. JJ says there are complications. They discuss JJ’s suicide attempt and whether he’s ready to come back. JJ says he’s committed to getting the help he needs. He started counselling with Eric. Eli offers to listen if he ever wants to talk. The men shake hands.

Gabi arrives at the DiMera Enterprise office and sees a banner with her face on it. “Looks like I’m seeing double. And what a sight it is,” Stefan says as he walks in. He’s looking forward to working with her. Gabi isn’t so sure it’s going to happen. Stefan knows she only agreed to work here because of her ex. Gabi’s pissed off and blasts Stefan for being so offensive. Stefan is sorry. He says Chad lacks killer instinct and won’t let his father’s legacy go extinct. Gabi calls his father a glorified thug. Stefan points out that her father’s a failure and Gabi snaps at him. This goes on until Gabi decides to take her business elsewhere.

At the DiMera mansion, Abigail whistles at a naked and newly beardless Chad in their bedroom. She tells him how Stefan exposed himself to her and Chad’s disgusted. She talks him out of doing anything about it and then they have sex. After, they discuss Andre sneaking into Kate’s room last night. Chad laughs. He thinks one or both are playing each other. Abs wants to shower together but Chad needs a raincheck. Downstairs, Vivian comes across Andre giggling to himself. He’s happy that their plan is working like a charm. Vivian’s concerned that Gabi Chic won’t sign. They need to make it happen so they can launch the IPO and Andre needs to manage his feelings for Kate. Vivian heard sounds of somebody strangling puppies last night in the bedroom quarters. Kate walks in and Vivian pokes fun of Kate’s bags under her eyes. Kate asks if she had her ear to the door last night. They spar a bit more and Vivian goes off in a huff while Kate tells Andre she felt safe last night. They talk up signing Gabi Chic today.

Kate and Andre arrive at the DiMera office where Gabi is on her way out. She explains she’s taking her business to Basic Black. Stefan goes and Andre and Kate try to change her mind. She calls Stefan insufferable. Kate takes Gabi aside and Vivian calls Andre, who complains that her “stupid son” is ruining their plan. Vivi will talk to him. In another room, Kate shows Gabi all the products she endorses in her beauty blog. Kate asks her to stay at DiMera, so Gabi agrees. They return to the other office and tell Andre. He texts Vivian, who at home, does something on the laptop. Stefan returns home and knocks on Abby’s bedroom door. Abs answers in a towel. He wants to see her in an hour in his office. Abby notifies him to stay clear of her bedroom. It’s off limits and their relationship is purely business.

A suddenly bearded Chad goes to John in the park to ask for help in digging up dirt on Stefan.

Kayla arrives at the pub. Roman changed the menu, she notices. Steve hides his symptoms by having his usual.

Back at SPD, Eli gets a call from Gabi who updates him about signing with DiMera. He congratulates her and notices Lani slinking out.

Chloe wants to know what Eve’s intentions are toward her pal, Brady.

Steve and Lani Have Dizzy Spells but...