Friday January 5, 2018: The DiMera family learns that there's one more of them, Eric finds Roman with Anna, Rafe and Ciara have an honest talk, and Andre shares his feelings with Kate. 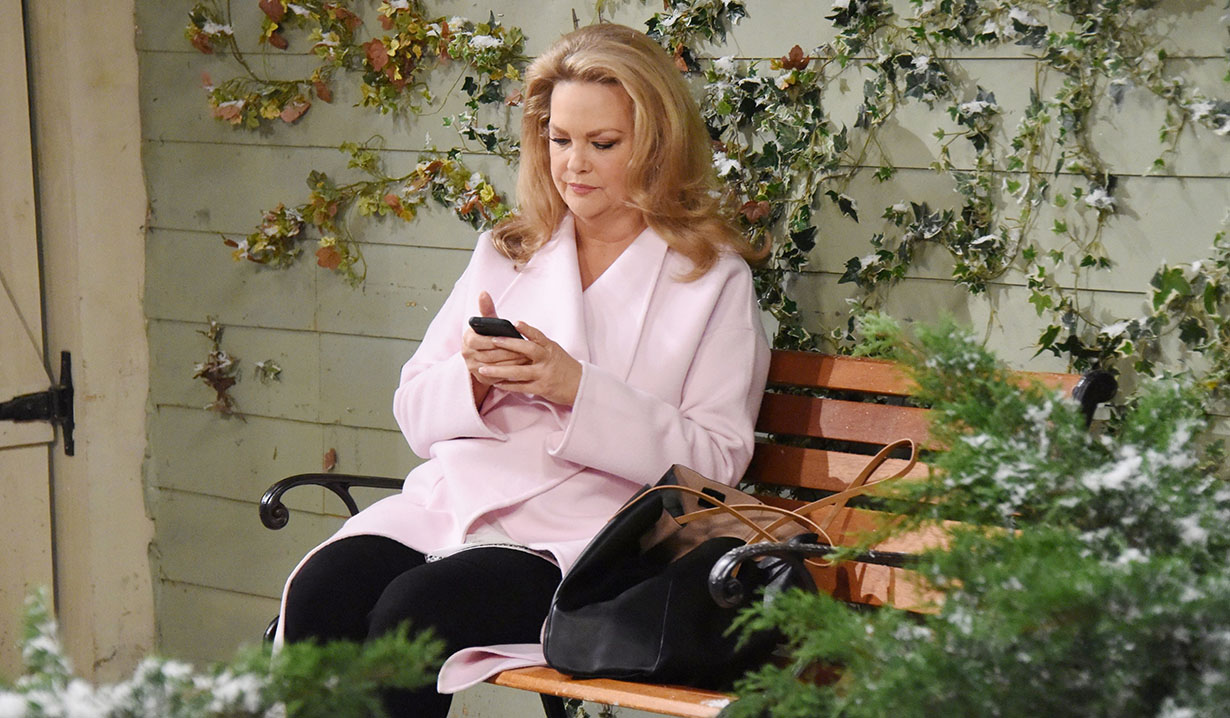 At the pub, Eric asks his dad why they’re closed. Roman’s taking the day off. Anna DiMera, (played by Leann Hunley), walks in. She’s missing her earring and thinks she lost it in Roman’s bed. Eric’s eyes widen in surprise. He had no idea Anna was in Salem. Roman says they were chatting on the phone and he invited her to spend New Year’s Eve with him. Eric doesn’t look happy. Anna goes upstairs while Eric fills his dad’s head with what happened at the New Year’s Eve party. Roman’s stunned to hear about Stefano’s new “spawn,” Stefan. They discuss Jennifer and Eric admits he’d like a relationship with her. Roman’s happy to hear this. He’s always thought Jenn was good for him. He asks if Eric’s over Nicole. Eric still misses Nicole but is ready to move on with Jennifer. Anna reappears and goes outside to check her messages.

At SPD, Jenn admits to Hope that Ciara threw her addiction and Eric’s DUI in their faces at the party. Hope’s mortified and sorry. Hope asks about Jenn and Eric’s date. Jenn’s not sure yet if Eric likes her the way she likes him.

More: Most reinvigorating soap episodes of 2017 At the loft, Rafe knows that Ciara overheard him and Sami talking about having sex and he’s not only sorry it happened but he’s sorry Ciara found out, knowing this has hurt her. Ciara cries. She doesn’t understand how he could do that to her mom. Rafe never meant to hurt Hope. He’s not making excuses for it but wants to explain. Ciara has no respect for him anymore. Rafe explains what went down with their break-up and how he took comfort in Sami, who was also in a lot of pain because of her issues with Will. It was one time. He asks to be the one to tell Hope. Just then, Hope arrives. Rafe declares he came over to see how Ciara was. Ciara lets her mom know she told Rafe what she was upset about.

Kate walks into the DiMera mansion with the DNA test results. Andre and Vivian follow and Andre says the test confirms Stefan’s their brother. Vivian’s happy but everyone else is morose. Stefan immediately wants to discuss the company. He wants to put Andre and Kate in charge of Countess Wilhelmina and would like to keep Abigail as head of PR. Stefan likes Chad as an executive in a VP role and also work for Stefan in a similar capacity. “No. No way in hell. I quit,” Chad says grimly. He takes off and Abigail bows out as well, leaving Kate and Andre. They’re in but warn if he makes a wrong move, he’s out. Everyone parts ways and Kate and Andre discuss their marriage. Andre confesses that his feelings for her are developing. He thinks they have a shot. Kate’s caught off guard. Andre admits he loves her and asks how she feels. Kate admits, “Being your wife isn’t the prison I anticipated it to be.” Andre tells her she should be writing greeting cards. Kate’s sorry. She needs time to sort her feelings. Abigail and Chad drink at Doug’s Place, upset over Stefan’s takeover. Abigail has an idea. The music plays loudly as she tells him they need to get their jobs back to get access to him so they can trace corporate espionage. Abigail goes and Kate arrives. Chad buys her a drink but says nothing is forgiven. “Misery loves company.” Kate’s dismayed that Chad quit and calls it cowardly. Chad confides that Abigail went to get their jobs back. Together, he thinks the four of them can take Stefan down. Kate grins.

Jenn arrives at the pub and is happily surprised to see Anna. They embrace and Jenn learns Anna celebrated New Year’s Eve with Roman. When Jenn asks why she’s outside in the cold, Anna is giving Roman and Eric space because Eric was discussing that “awful woman” Nicole, that Eric’s still in love with. Jenn looks hurt and tells Anna she doesn’t feel well. She hightails it out of there.

Abigail returns home and knocks on Stefan’s door. He lets her in and he’s naked. Flustered, she looks away. Downstairs, Andre talks to Stefano’s portrait, telling him he’ll save his company. Vivian appears and he’s bitchy toward her. Vivian doesn’t think that’s the way to treat his partner in crime, especially since their plan is going so well.

Ciara Confides to Tripp That Rafe...

Abigail Is Flustered at Seeing...