Ciara Confides to Tripp That Rafe Cheated on Her Mother

Thursday January 4, 2018: Rafe realizes why Ciara's so upset with him, Stefan wants to live with Chad and the rest of the DiMera clan, and Kayla tells Theo about his rehab. 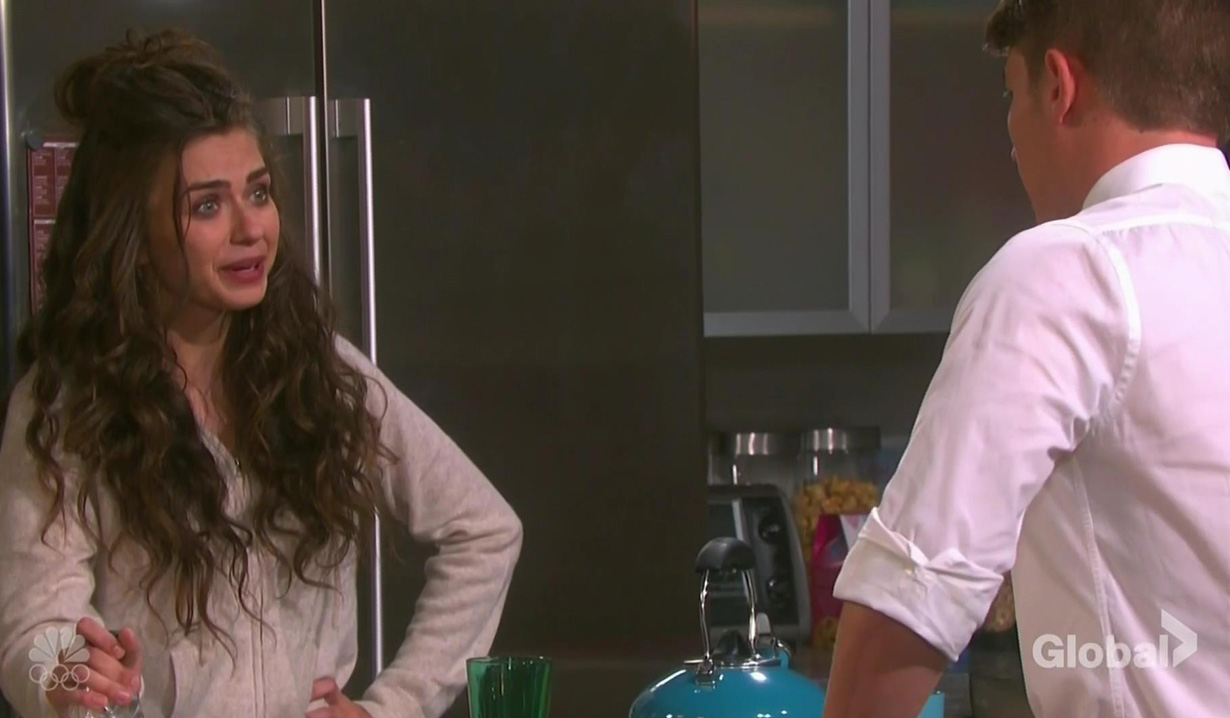 Abe visits Theo in the hospital.  Abe wants to know why Theo didn’t tell him Kate put him up to that break-in. Theo rationalizes that he was helping his family. Abe vows not to turn Kate in but orders his kid to quit working for the DiMeras. “You are done with the DiMeras period.” Theo points out that his dad promised to stop treating him like a kid. “Then stop acting like one,” Abe yells. He immediately regrets it. Outside, Kayla’s annoyed at having to stop a fight between Andre and Vivian. Kate explains that Vivian’s trying to pass off Stefan as a long lost relative and Andre’s guarding the lab to ensure the paternity test results aren’t switched the way they normally are at University Hospital. Kate reminds Kayla of all the money the DiMeras donate to the hospital. Through gritted teeth, Kayla assures Kate there will be no issues. She goes to expedite the lab work.

More: Most annoying soap characters of 2017

At the DiMera mansion, Abigail and Chad are shocked to hear that Stefan owns the house. He knows that Chad took out a large mortgage when the company wasn’t doing well. Stefan purchased the bank that gave Chad the line of credit. Until Chad can pay off that loan, the house is Stefan’s, and he wants to live with them, to be a part of the family. Chad accuses Stefan and Vivi of sabotaging the company in order to get to this moment. Stefan denies that and goes to find his room. Chad calls Belle to ask her to dig into Stefan’s past.

Ciara wakes up on the sofa at the loft hungover. Claire makes a lot of noise to stir the pot and then starts an argument. She warns Ciara to stay away from Theo. Ciara scoffs at that, knowing Claire will dump Theo for Tripp in a heartbeat. Claire denies that. Tripp appears and Claire goes. Ciara almost throws up while telling Tripp what happened last night, then reveals, “Rafe cheated on my mother with his skanky ex-wife.” Tripp muses that though he doesn’t know them well, Hope and Rafe seem like a happy couple. Tripp calls Ciara a hot mess since arriving in Salem. He knows what it’s like to be angry and did a bunch of stupid things that made others’ lives difficult. He advises Ciara to consider what to do with this information since she could hurt her mom, not help her. Ciara looks at him petulantly.

In Hope’s office at SPD, Hope thinks Ciara’s keeping something from her. She asks if Rafe knows why Ciara’s so upset with him. Rafe flashes to his past conversations with Ciara and realizes she must have overheard him talking to Sami about their one-night fling. Hope notices the look of comprehension on his face and asks what’s wrong. Rafe covers. Kate walks in and asks what they’re planning on doing to get rid of Vivian Alamain. Since they’re doing nothing, Kate leaves, miffed.

Claire arrives at the hospital to see Theo. Abe relents and says Theo can go back to the DiMeras. Kayla appears with test results. His recovery will be more complicated than they thought. There’s a clinical trial in Cape Town South Africa that which involves implantation of stem cells in Theo’s brain combined with rigorous therapy. Recovery can take up to a year and there’s no guarantee but they have had great success. Theo doesn’t want to go. Later, Kate finds Kayla at the hub and takes the DNA results from her. Abe leaves the room and Claire offers to go with Theo. They sob into each other’s arms.

Rafe arrives at the loft. He thinks he knows what Ciara was about to tell her mother…

Eric gets a surprise when he sees Roman’s date.

Will Devastates Sonny by Asking for...