Will Devastates Sonny by Asking for a Divorce

Wednesday January 3, 2018: Will is honest about kissing Paul, Brady and Eve are caught in the act, and Stefan shocks Chad and Abigail with his announcement... 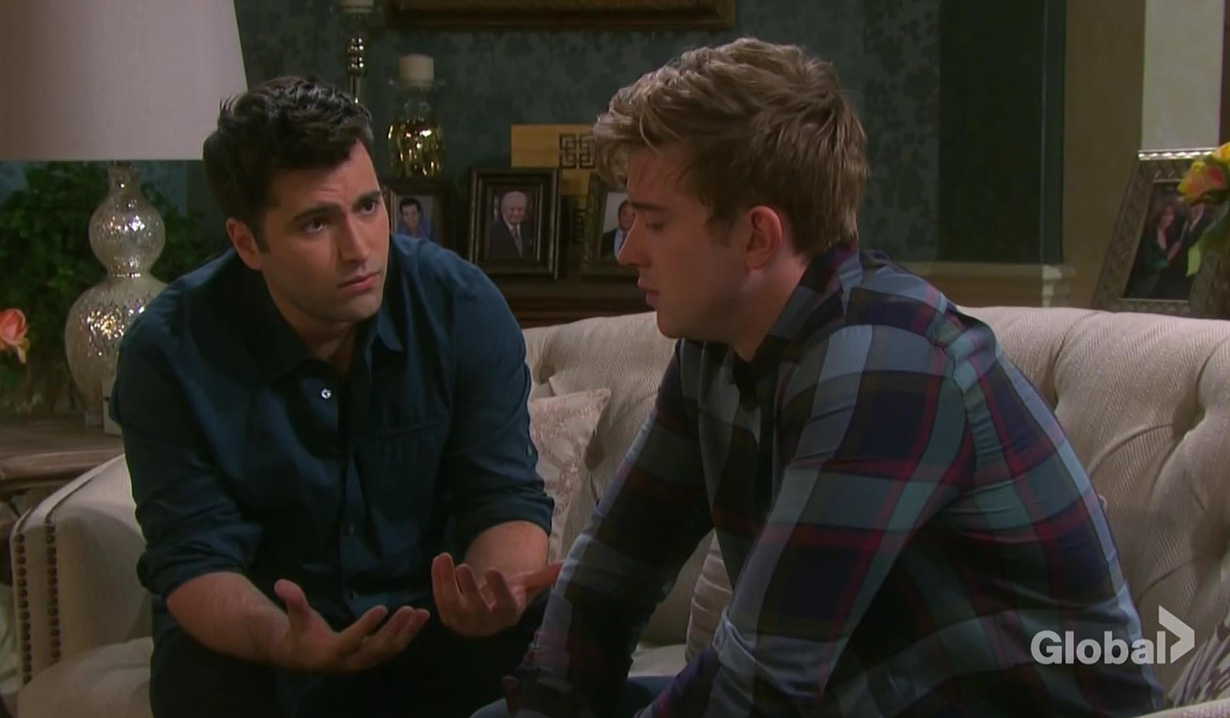 Eve wakes up to Brady in her bed after a night of sex. “Happy New Year. It seems we brought 2018 in with a bang.” He asks if she wants to keep this up and “see where this ride takes us.” Eve declines. She’s on to him! Brady tries to distract her by caressing her legs and though she tells him to stop it, she can’t help herself and they have sex again.

At the Kiriakis mansion, Sonny and Arianna show Will that they’ve made him breakfast. Will feels spoiled. Sonny kisses Will’s cheek, happy he’s back. “We’re a family,” he says. They send Ari to bake cookies with Maggie and when Sonny moves in for a kiss, Will pushes him away.

Abigail works on her laptop on her bed while Chad snaps at someone from the board about giving Stefan the CEO job. Chad’s reminded that there’s a positive DNA test and replies that Vivian Alamain’s been doctoring DNA tests since the beginning of time. He disconnects and tells his wife Vivian has the backing of everyone on the board. They ponder what their recourse is. Abigail learns Stefan is a corporate raider. Downstairs, Kate paces, agitated over Vivian’s return. Vivian walks in and says it looks like Kate’s about to burst an artery. They immediately argue Vivian’s attempt to steal DiMera. Vivian doesn’t get why Kate’s still living in “this House of Usher” when Stefano kicked her out years ago. Kate explains Chad asked her to move in and reminds Vivi that she and Andre are married. Andre kisses Kate’s cheek to show a united front but Vivian doesn’t buy it. Vivian taunts Kate, calling her a poor mother to her real kids when she treats Chad like a king.

At Doug’s Place, Chloe cleans from the New Year’s Eve party when Stefan arrives. She tells him they’re closed but he’s there to pick up his monogrammed handkerchief. He tells her it’s one of the only things he has of his father’s. Chloe wasn’t a fan of Stefano’s and hates Vivian’s guts. She hopes the apple fell far from the tree. Not that she’s judging – her parents are no Ozzie and Harriet. She warns him that Vivian’s more of a monster than all the DiMeras combined. Stefan shrugs. As far as Chloe knows, he could be just like her. They discuss who Chloe is, a working mother. He finds it very sexy and hopes to see her around soon. Back at the DiMera mansion, Vivian calls Stefan cunning like his father. She brought him to Salem after hearing the company was in jeopardy. Kate knows this is a money scam and says Chad will bring the company back on top. Vivian taunts Kate and gets a slap across the face just as Stefan walks in. He comes between the women. Chad and Abigail appear. “Hello brother,” Stefan says. Chad motions to Andre and tells Stefan that’s his brother. Chad knows Stefan’s real name is Sam Maitland and that he’s a corporate raider. Stefan asserts that it’s no secret. That’s his adoptive name. He changed his name when the paternity tests revealed he’s Stefano DiMera’s son. Since nobody believes that, Abigail plucks a hair from his head and Stefan agrees to another test. Vivian, Kate and Andre take off and Stefan says he wants the company to survive. He asks to work together to save what Stefano left them and then drops a bombshell. Technically, Chad doesn’t own the mansion anymore.

More: Highlights in soap news for the week

Will flashes to kissing Paul at the Kiriakis mansion and is about to tell Sonny when Chloe interrupts looking for Brady. They haven’t seen him so she goes off to his room. Will tells Sonny that he and Paul kissed again. Meanwhile, Chloe walks into Eve’s room and gapes when she sees Eve and Brady in bed. “He’s busy,” Eve whispers and Chloe lets herself out. Brady follows her outside and says she wanted to warn him Vivian’s back. As they discuss it, Eve appears and eavesdrops quietly. She can tell Brady’s up to something concerning her. Back in the lounge, Will explains how the kiss went down and that he liked it. Sonny asks if Paul came on to him. Will stops him and says no. He can’t be married to Sonny when he’s attracted to other men. Sonny wishes Will could remember. This upsets Will, who wants to remember. He knows that they had something special but he doesn’t feel that right now. Will’s sorry. Until he figures out who he is and what he wants, he can’t be with Sonny. Sonny cries and begs him not to do this but Will’s moving out and filing for divorce.

Vivian, Kate and Andre arrive at the hospital to do the DNA test.

Ciara Confides to Tripp That Rafe...