Tuesday January 2, 2018: The New Year's Eve party is crashed by Vivian and her son Stefan, Will kisses Paul again, and Ciara goes off on Eric and Jennifer while in a drunken state. 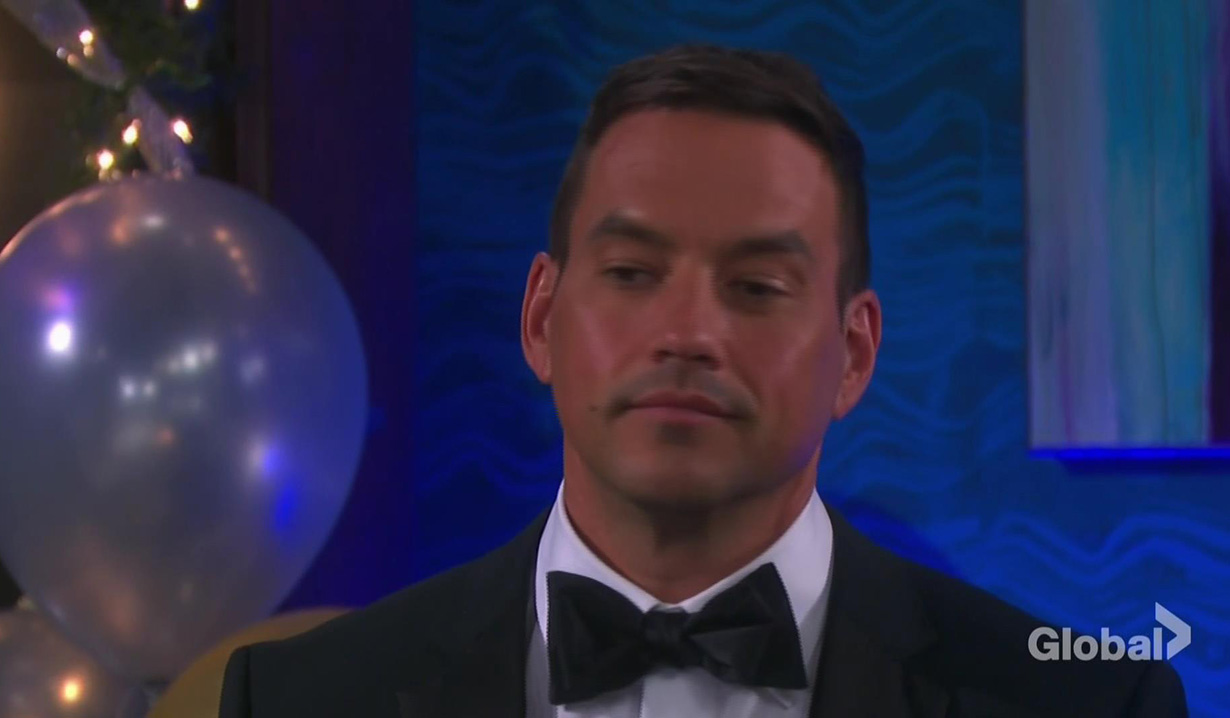 Paul jogs up to Will at the square, surprised he’s not with Sonny. Will says he’s sorry that Paul was hurt by him and Sonny. Paul shrugs. Will takes Paul’s hand and kisses him. Eventually, Paul pulls away and questions the kiss. Will says it’s midnight, and he’s attracted to Paul. Will also feels bombarded with expectations of who he once was and Paul seems content to see the “present-tense” Will. Paul’s sorry and wishes he could help. Will says he is. John and Marlena interrupt. It’s awkward and John walks Paul home while Marlena stops Will to ask what they walked in on. Will admits to the kiss. Marlena takes it in stride and Will says he knows that he and Marlena were close before and he’s comfortable talking to her about this. He doesn’t want to be that guy who cheats on his husband.

Hope and Rafe drag Ciara into the office at Doug’s Place and castigate her about drinking underage. A cloaked figure walks into the restaurant, removes her cape and everyone gapes. Kate yells, “Vivian!” Vivian Alamain says, “Sorry I’m late,” and grins. Abigail realizes Vivian’s ‘Firebird’. While outside, a man gets out of a car, Vivian tells everyone they should meet her ‘plus one’. Kate asks if she dragged Ivan with her. Vivian laughs. She left him in India, mooning over her. Her mystery man has the same blood coursing through his veins as Chad and Andre. She calls him Stefan O. DiMera. Jennifer goes to get Rafe and Hope, while the partygoers wonder what Vivian’s talking about. Back in the office, Hope asks her daughter how they can help her when Eric and Jenn rush in to tell them Vivian’s back. They stay to look after the drunk while Rafe and Hope head back to the party. They return as Vivian texts Stefan to come in and introduces him to the crowd when he makes an entrance. Kate finds it amusing and laughs at Vivian for losing it. Stefan tells everyone, “My name is Stefan Octavius DiMera. I’m Stefano’s son.” There are murmurs of shock and laughter as everyone takes this in. Vivian tells everyone, “God blessed me with one of Stefano’s children.” Stefano never knew he existed. Stefan was conceived when Stefano was posing as Rudolpho Meradi and seduced her to steal her ruby. Ivan told Vivian that the baby was stillborn. Vivian says she grieved for him. Stefan pitches in and says it’s only been a year that he knew the true identity of his mother. He confronted Ivan, who confessed the truth. Kate snipes that Vivian didn’t find him in Dubai, but on ‘impostors.com’. Vivian claims to have proof. “Probably went to the Sami Brady paternity lab,” Chloe says sarcastically. Vivian says she used the DNA samples from Interpol and hands over documentation to Rafe. Back in the office, Ciara reveals she feels like she’s not heard. Jenn cautions her against drinking and making poor decisions so Ciara lashes out at them for both having addictions and for Eric’s DUI which killed Daniel. Eric and Jenn are visibly hurt. Ciara immediately apologizes. Eric forgives her and they take her home through the back. Meanwhile, Stefan explains that people used to be frightened by the DiMeras but the power behind Stefano’s legacy is in peril. Stefan’s decided to embrace his birthright as head of his family and CEO of DiMera Enterprises. Chad’s happy in his newfound discovery but declares he’s the CEO. Stefan hands out letters to Kate, Chad and Andre from the board and says it’s ‘effective immediately’. He and Vivian grab a bottle of champagne and head out. At the Kiriakis mansion, Eve and Brady share a hot kiss until she breaks away and slaps him. Meanwhile, in the foyer, Sonny texts Will, asking where he is. Back in the lounge, Brady apologizes. They argue and Sonny walks in. Eve goes and Sonny questions what’s going on. Brady suggests Sonny keep his eye on Will. Brady leaves the room. Later, upstairs, Brady opens Eve’s door to tell her they’ve unfinished business. They start making out.

John walks Paul to the pub as Paul opens up about how difficult it was seeing Sonny tonight. Paul admits Will kissed him and wonders if he should tell Sonny. John asks what the point would be. Paul doesn’t want to break them up and realizes he needs to let go.

Back at the square, Will says when Sonny talks of their love it sounds amazing but as though he’s talking about a complete stranger. Marlena understands. Will feels like he’s known Marlena forever though. Eric and Jennifer return to her house. They go over the events of the night and agree 2018 can only get better.

Will arrives at the mansion and tells Sonny that he was with Marlena, who helped him to figure some things out. Sonny’s glad to hear. Will’s tired and wishes Sonny a Happy New Year and he goes to bed. Sonny looks crestfallen.

Vivian faces off with Kate!

Will makes a big decision regarding Sonny.

Days of our Lives Is Pre-empted New...

Will Devastates Sonny by Asking for...