Friday December 29, 2017: A drunk Ciara shows up at the gala, Abby pushes Andre to tell Kate how he feels, Will ducks out on Sonny, and Brady and Eve make another bid for Gabi. 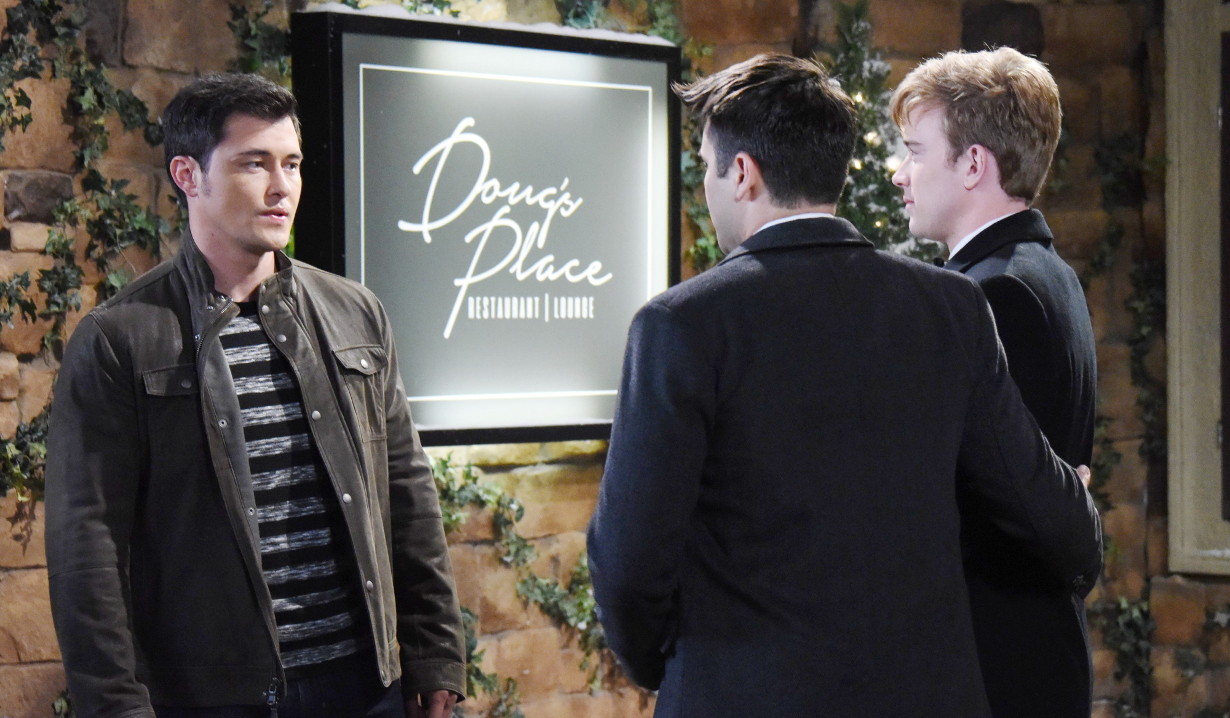 Eric arrives at the Horton house to pick up Jenn. He helps her zip her dress and they tell themselves they’d better get to the gala.

At the police station, Rafe admires Hope’s outfit and tells her she’s perfect. They make out until Ciara interrupts to moan about Theo and how he wants nothing to do with her. Hope assures her she can have more than one great love in her life. Changing gears, Ciara pulls out her new motorcycle license and asks for the keys to Bo’s bike. Hope refuses to hand them over while she’s so distraught. Ciara storms out.

Chad and Abby make out in their room at Casa DiMera. He wants to stay in, but she reminds him they have to host a party. Downstairs, Kate catches Andre drinking. She notices he’s preoccupied. He thinks about how he loves her but talks about his father’s absence.

In a hotel room, Vivian (played by Louise Sorel) lays out her jewelry and a man’s tuxedo. The man helps her dress. Their car arrives and they head out.

Ciara wanders around the park drinking and complaining to herself about how nobody likes her but they all love Claire. She remembers eavesdropping on Rafe talking to Sami about them having sex and decides to crash the gala.

Sonny helps Will with his bow-tie at the Kiriakis compound. Will doesn’t understand why they are going to a DiMera party. Sonny promises to stay by his side all night. Upstairs, Brady wanders into Eve’s room in his towel and announces they are crashing the DiMera party. Lying on her bed, he offers to distract people while she corners Gabi to make her pitch. She’s impressed by how underhanded he is. They get dressed and head downstairs. He pours himself a drink and tells himself how great he’s doing. Paul strolls into Doug’s Place looking for a beer. Chloe tells him that they are closed for a private function but gives in and then quizzes him about his private life. He’s just looking forward to the year ending. Chad and Abby arrive and he wishes them a happy New Year. As he heads out to avoid Sonny and Will, he bumps into them by the door. That’s uncomfortable. After Paul leaves, Kate and Andre arrive. That’s awkward. Andre makes a jab about Titan and escorts Kate in. When she spots Chad, she starts apologizing but he refuses to listen. Meanwhile, Abby takes Andre aside and prods him to tell Kate how he feels about her. Andre crosses over to Chad to toast to their future and catching the saboteur. Brady and Eve arrive. He heads straight to Kate and Andre and starts making a scene, dragging Sonny into it. Eve sneaks across the room to corner Gabi and remind her she can still get out of her DiMera contract. Meanwhile, Hope and Jenn discuss Eric as Eric and Rafe discuss Jenn. Abby gets on the mic to make a speech about acquiring Gabi Chic and then introduces her husband. Chad makes a speech and toasts to the future of the company. Will gets a call about Susan. She’s not doing well so he tells Sonny he wants to go and call her. Elsewhere, Eve makes her pitch to Gabi again while Andre chases Brady out of the party. Chad encourages Sonny to follow his husband home and wishes him well. Ciara storms in, clearly plastered. When she starts making a toast, her mother and Rafe drag her into the office. Rafe tells her to show her mom some respect. She thinks that’s pretty rich. Back in the ballroom, the countdown commences. As Gabi and Eli tell each other how much they care, Eric plants a kiss on Jenn. Suddenly, Vivian strolls into the middle of the room and reveals herself. Kate nearly jumps out of her skin.

Will bumps into Paul jogging around town. He apologizes for hurting him. Paul assures him it’s no one’s fault. Will takes his hand and then pulls him into a kiss.

Sonny returns to the Kiriakis compound. Will has not returned. He runs upstairs with some champagne as Brady and Eve sit in front of the TV to toast to their night. He pulls her into a kiss.

“Days of our Lives” will be preempted on Monday January 1 due to the NHL Winter Classic.

Days of our Lives Is Pre-empted New...