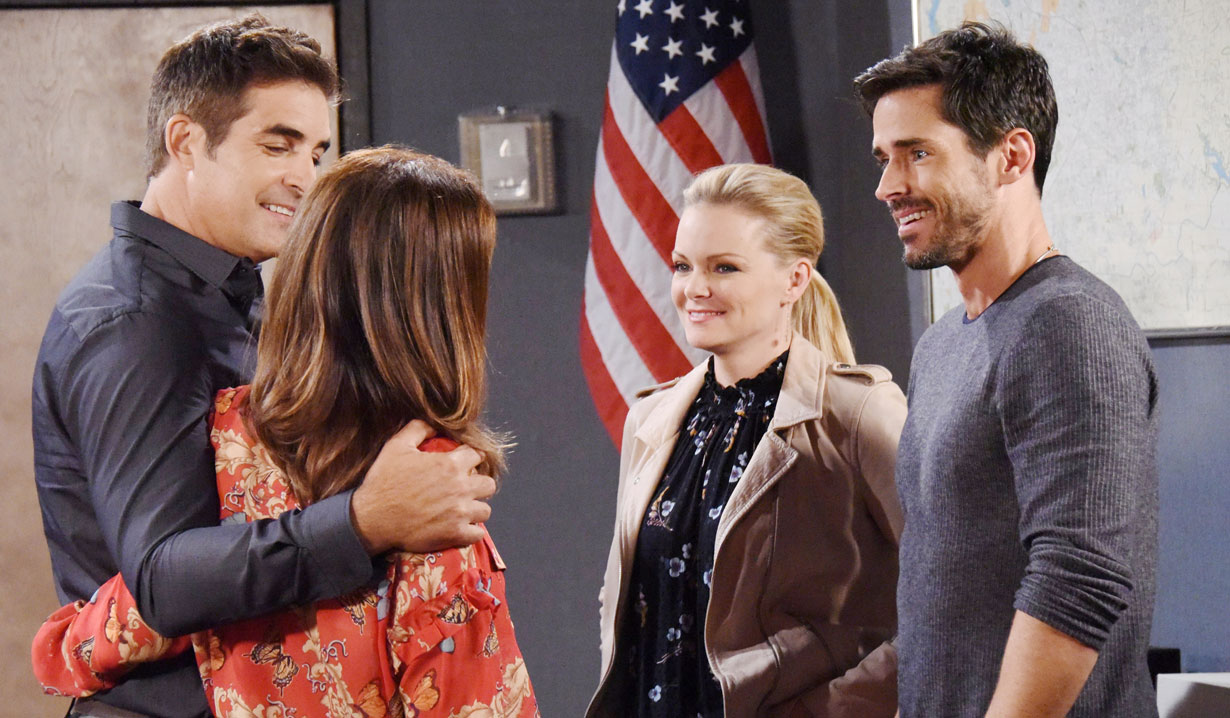 In their room at the DiMera mansion, Abby checks her RSVPs for their New Year’s party celebrating Chad named CEO of DiMera. Chad pulls her away from her computer and onto the bed, where they have sex. In the living room, Kate tells Andre she confessed the truth to Abe about her involvement in Theo’s shooting, and she is just waiting for Abe to come for her. Andre will do what he can to protect her, and asks her to join him at Abby’s party tonight. Abe stops by Rafe’s office at the Salem PD to discuss Theo’s case. Rafe knows he is here to ask him to step down so Hope can get her job back, and he understands.

At the hospital, Claire sits with Theo when Tripp calls to tell her that she needs to come in to work at the café. Claire runs into Belle and Shawn as she’s leaving. They inform her that they have to head back to Hong Kong, and they hug goodbye. In the Horton Square, Tripp tells Ciara he did what she asked. Later, Claire shows up and thanks Tripp for covering for her, and knows she would have lost this job without him. Tripp comes clean and admits she wasn’t needed here today and Ciara got him to call her away from Theo. Claire can’t believe Ciara got him on her side. He confesses he did it because he wanted to be alone with her, and he let his emotions blind him. Claire leaves upset. Jenn and Hope meet at the Brady Pub. Hope brings up Abby’s party, and Jenn admits she is going with Eric. She is nervous because Eric may not have moved on from Nicole. It is also a hard day for him due to his driving drunk a few years back and causing the car accident that killed Daniel. Hope gets a message from Rafe asking her to come to the station, so she departs. Later, Jenn gets a call from Eric about their date, which he’s looking forward to. Ciara visits with Theo at the hospital, and tells him that she still loves him and they belong together. She reminds him that they’ve been best friends forever and have a stronger bond than most couples. Claire listens at the door as Theo tells Ciara he couldn’t stand it if he lost her, and she is his best friend. However, he loves Claire, and wishes they could all just be friends again. Ciara cries that will never happen. She spots Claire at the door as she storms out. Theo is happy to see Claire, but is tired, so she tells him to rest. In the park, Shawn and Belle discuss the mysterious hacker trying to take down DiMera, who still hasn’t been identified. Belle gives Chad a call, and interrupts his and Abby’s cuddle time, to inform him that they may have a lead on who is sabotaging DiMera. Shawn believes this isn’t an inside job as Chad thinks, and Belle warns him DiMera could be attacked soon.

Hope arrives at the station and is surprised to see Abe in Rafe’s office. Abe tells Hope that he was wrong to fire her and would like her to return as Salem PD’s commissioner. She thanks Abe and accepts. Abe turns Theo’s case over to her, and she learns about Theo’s statement about the shooting and break in that he was working alone. She also notes Theo only set off the warehouse alarm, he didn’t actually break in, so she thinks the case is closed and not worth spending the tax payer’s money on. Abe thanks her. Later, Shawn and Belle drop by to say goodbye to Rafe and Hope.

At a computer, a woman responds to the RSVP and indicates she’s bringing a guest.

More: Louise Sorel back to Days

Back at the DiMera mansion, in bed, Abby tells Chad that Andre is going to bring Kate to her party, and that she thinks he has fallen in love with Kate. Abby checks her RSVPs again, and discovers an email she doesn’t recognize in the list. Down in the living room, Kate accepts Andre’s invitation and thinks she might as well go out in style. Abe drops by to see Kate and tells her that she will get away with what she did only because the department is dropping the case against Theo. Abe offers to keep silent about Kate’s part in all of this, on the condition that Theo is not to work for the DiMeras again. Kate and Andre agree.

Ciara returns to the square defeated, and tells Tripp that Theo doesn’t want her because he’s in love with Claire.

Vivian returns to Salem with her and Stefano’s son, Stefan.

Kate Confesses the Truth to Abe...