Wednesday December 27, 2017: Abby confronts Andre about his feelings for Kate, Ciara and Claire fight over Theo, Jenn asks Eric on a date for New Year's Eve, and Kate tells Abe the truth about her part in Theo's shooting. 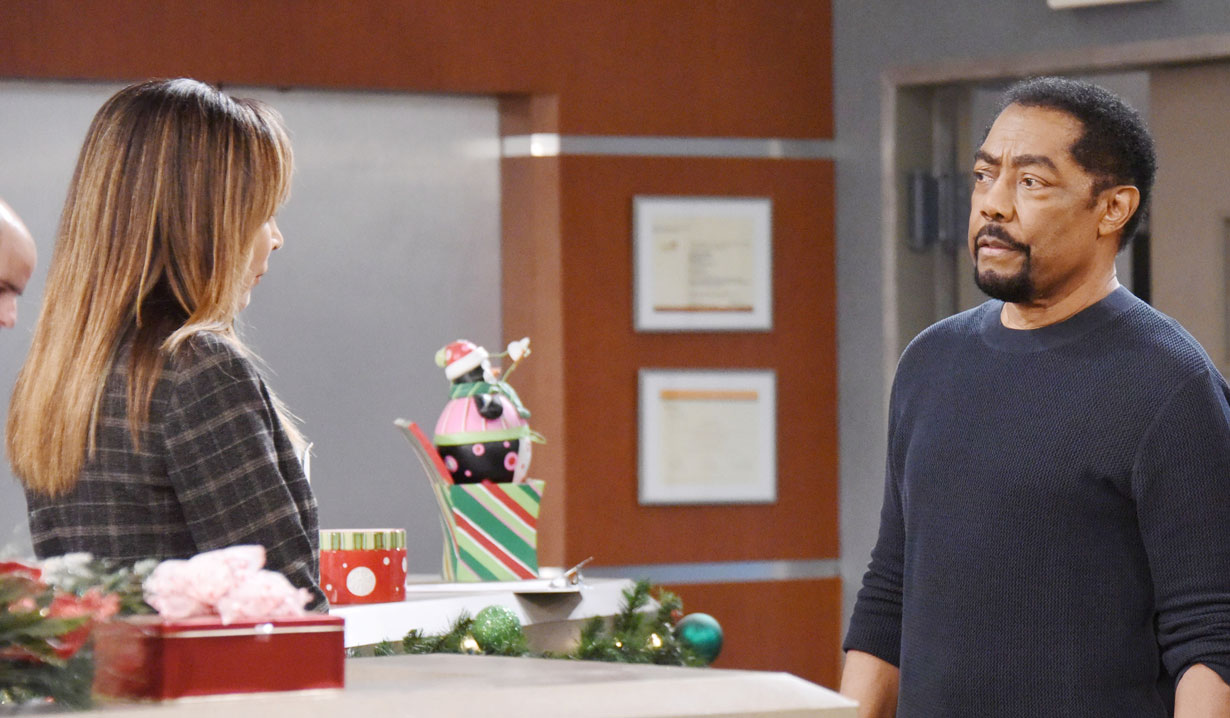 At the Hortons, JJ drops by to tell Jenn and Eric that Theo is awake, and that Abe has forgiven him. Jenn is thrilled. JJ has a whole new outlook on things now, and he finally feels like he’ll be able to heal from this. He asks Eric if they could set up a counseling session, and Eric says he’d be glad to. JJ thanks his mom for everything she did to help him. JJ leaves, and Eric is glad to see Jenn looking so happy. She tells him that he has a lot to do with that. Eric notices Jenn’s Scrabble board, so they decide to play a game. As they set up, Jenn invites Eric to go with her to Abby and Chad’s New Year’s Eve party. He asks, “As a date?” She tells him it can be a friendly outing, and she knows he doesn’t like big gatherings. Eric spells out, “I Say Yes” with his scrabble tiles. In the square, Claire tells Ciara to get over Theo, but Ciara refuses to give up on him again. Ciara will make him see they are meant to be together, but Claire refuses to allow her to go see him. The two sling insults until they begin shoving one another. Tripp arrives and pulls them apart. Claire explains Ciara wants to tell Theo she is still in love with him. Claire says she should go ahead and tell him, but not tonight. Claire decides to go see Theo, and asks Tripp to keep Ciara here. Claire leaves, and Ciara accuses Tripp of being in love with Claire and not taking the chance to be with her. She advises him to learn from her mistakes and fight for who you love. Ciara suggests they work together so they both end up happy.

At the DiMera mansion, Abby can’t help but notice how Andre keeps defending Kate. He claims he’s just doing what is best for the family. Abby doesn’t think so, and tells him to admit that he is in love with Kate. Andre admits she’s beautiful, and he’s never met a woman like her. Abby feels he should talk to Kate about his feelings, but he admits he’s afraid she might not reciprocate them. Abby is hosting a New Year’s Eve party, and suggests he bring Kate and arrange to be with her at midnight to share a kiss and see if there is a spark. He thanks her for the advice and for standing up for him. Abby reminds him that he was there for her during the lowest parts of her life, and jokes, “We crazy people have to stick together.” She only wants to see him happy. At the hospital, Abe asks Theo if a DiMera asked him to break into the warehouse. Abe and Lani leave the room and find Chad and Kate in the hallway. They explain that Theo assured them that he acted alone in breaking into the warehouse, and Abe apologizes to Kate for coming down on her and Andre. Chad and Kate go in to see Theo. Kate apologizes to Theo and asks why he lied to his father and sister. He didn’t want his dad blowing up on Kate, and she didn’t force him to do anything. Kate knows what she asked him to do was wrong, and she is so sorry. Theo remembers the day she married his grandfather, and how he accidently ran into her and spilled her champagne. Instead of yelling at him, she said they should be friends. He tells Kate that he loves her, and she cries. Kate hugs Theo and tells him that she loves him too. Claire comes in to see Theo, so Chad and Kate depart. Theo asks if she and Ciara are getting along. Claire tells him not to give Ciara another thought. In the hall, Kate asks Chad if he can forgive her. He doubts it, because he’s lost respect for her. Kate stops Abe from going back in to see Theo and confesses the truth, that she was the one who sent Theo to the warehouse that night. Abe is furious, but thanks her for her honesty. He goes in to see Theo. Kate tells Chad she’s been keeping her mouth shut for far too long, and whatever is coming for her now is better than living as a coward. JJ finds Lani at the Salem PD. She explains she needed to add Theo’s statement to the case file. JJ gives her tickets to Rihanna and wishes her a Merry Christmas. They hug, and she tells him she doesn’t want them to ever be apart again. They kiss.