Theo Forgives JJ, and Claire Orders Ciara to Stay Away From Theo

Tuesday December 26, 2017: Theo learns what happened to him, Eli and Lani stay silent about having sex, and Chad warns Kate. 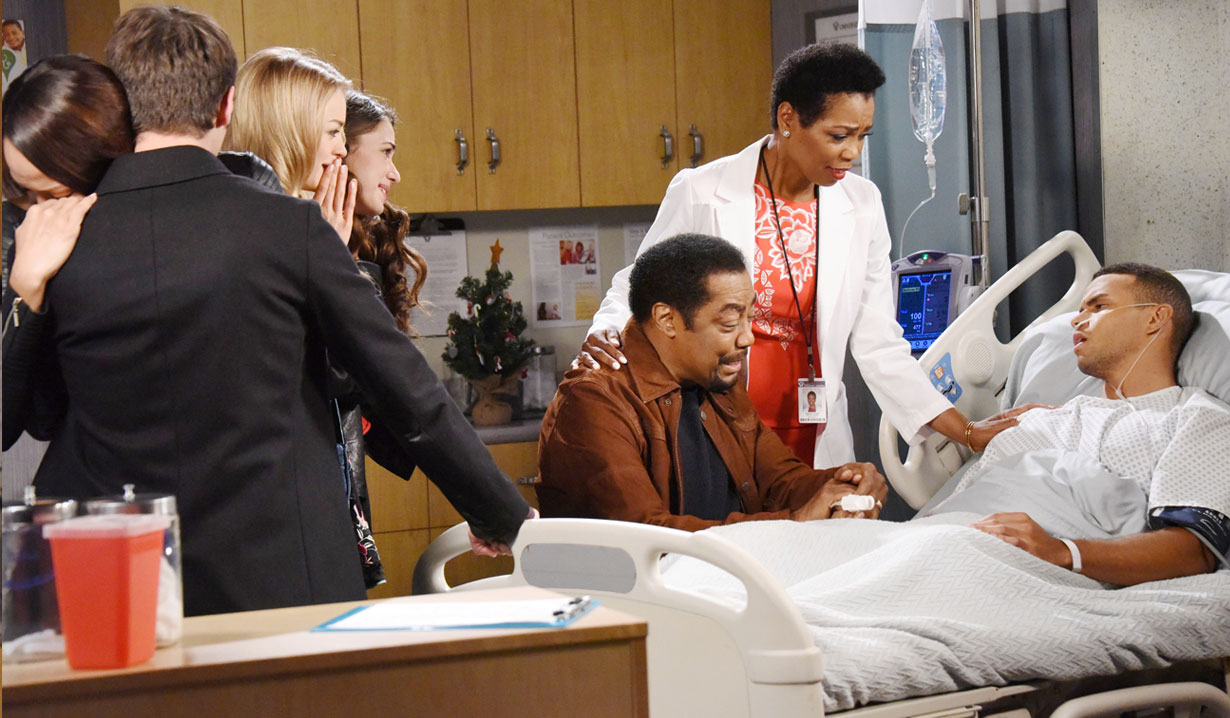 At the DiMera mansion, Chad demands Kate get out, but Andre states, “If she goes, I go.” Kate offers to leave, but Andre won’t allow it. Andre points out that Gabi’s contract has a trial clause, and she won’t work at DiMera without Kate, so Kate stays. Abby thinks Andre has a point. Chad warns Andre that if Kate causes drama at DiMera then both of them are gone. Chad storms off, and Kate thanks Andre for going to bat for her and won’t forget it. Later, Abby gives Kate and Andre the news that Theo is awake. Their celebration is short-lived when Andre realizes Theo could rat Kate out. Kate leaves, and Abby asks Andre where she went. He reveals she went to see Theo.

In the square, Gabi and Ari spend time with Eli. Eli can’t stop thinking about making love to Lani.

In Theo’s room, everyone is overjoyed when Theo opens his eyes. He responds to Valerie’s questions by blinking his eyes, and is able to squeeze Abe’s hand. Valerie ushers everyone out but Abe to look over Theo. Abe explains he was shot, but Theo doesn’t remember. In the hall, JJ and Lani are overjoyed and embrace, and so do Claire and Ciara. Valerie comes out to give everyone an update. Gabi calls to check on JJ, and he relays the news about Theo. Valerie informs Claire that Theo is asking for her, but Ciara assumes Valerie meant her and rushes in. Valerie hopes Ciara will not upset Theo, who is in a fragile state. Meanwhile, Lani tells JJ she knows about his suicide attempt. He swears he is no longer suicidal, and that everything he’s asked God for has come true. She explains she went looking for him last night, and found him with Gabi in bed. She was messed up, couldn’t think, ran into Eli and told him that she thought Gabi cheated on him. Eli knows the truth now, but not before he was ugly to Gabi. JJ knows she didn’t do this on purpose, but wonders where they go from here. Before she answers, Valerie interrupts to let them know Theo can see people now. In Theo’s room, he’s surprised to see Ciara back. She feels if she hadn’t left that this wouldn’t have happened, and she has something important to tell him. Claire bursts in before Ciara says anything, and tells him how happy she is that he’s awake. She professes her love to him and apologizes for the fight they had. He assures her it is okay. JJ and Lani stop in to see Theo, and he wonders why JJ isn’t talking. JJ cries that he was the one who shot him, but he didn’t know it was him. JJ explains what happened, and Theo tells him it wasn’t JJ’s fault but his own. He doesn’t always understand things when people don’t give him an exact order he can comprehend, and this is on him because JJ didn’t know it wasn’t a gun. JJ leaves Lani and Theo to talk. Abe returns, and learns Theo’s forgiven JJ. Lani asks Theo what else he remembers about that night, because it seemed he was trying to break into a building. He admits he was, so Lani asks if a DiMera asked him to do it. Kate looms and peers in the room. Chad arrives and speaks with Valerie in the hall. She thinks it was his and Kate’s specialist that helped Theo.

Eli returns to his room and strips his bed of the sheets. Gabi finds him and wonders why he’s doing laundry on Christmas. He makes excuses, and she explains she’s here to talk about him and Lani. She knows Lani must have gotten the wrong idea about what she saw. Eli is about to confess what happened, when Gabi spots JJ’s gun on the dresser and cries. He apologizes for not having a chance to turn it in and comforts her. She explains finding JJ in his dress blues, and learning his plan to go to the square and kill himself. Eli knows she saved him, and tells her she is amazing and he’s a jackass. He promises her that she can lean on him, and he’ll always be there for her.

Back in the square, Claire confronts Ciara and warns her to stay away from Theo. Ciara won’t, and refuses to give up a second chance to be with Theo, or let Claire come between them.

Abby figures out that Andre is in love with Kate.

Kate Confesses the Truth to Abe...