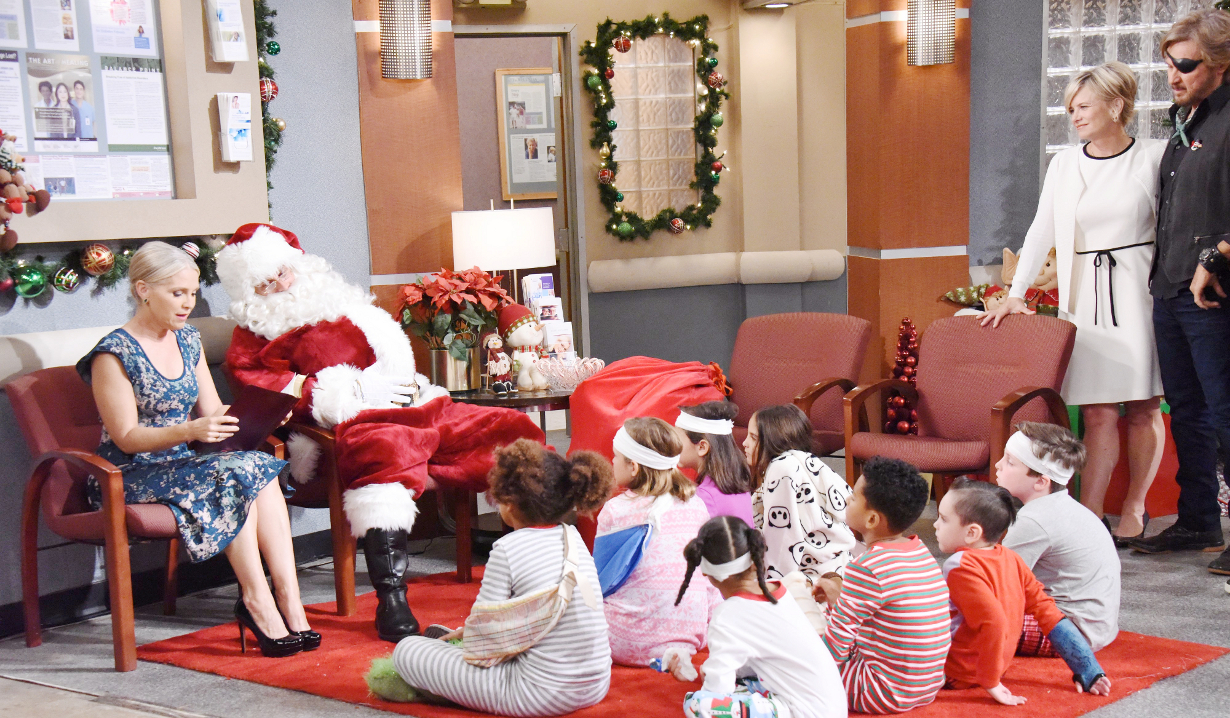 At the Horton house, Jenn worries to Eric about JJ. He starts eating donuts.

JJ wakes up in his hotel room with Gabi. She’s about to leave and reminds him he needs to get help today. He’s hesitant, but she pushes him. JJ calls his mom and says he’ll stop by later and talk to Eric about counseling. Gabi tells him she’ll always fight for him and hopes he can fight for himself. She takes his gun.

Lani wakes up in a hotel bed with Eli. She’s shocked they had sex. He reminds her that JJ and Gabi did too. She thinks what they did was wrong and leaves for the hospital. After he gets dressed, Gabi shows up and apologizes for not seeing him last night. He accuses her of sleeping with JJ. She protests she didn’t and only stayed with him to stop him from committing suicide. Eli feels like an idiot. She gives him JJ’s gun. Things are uncomfortable. They make plans for later.

Abe is in Theo’s hospital room when Valerie comes in. He’s been up most of the night thinking about what Jenn said. She reminded him of a past mistake he made. He felt the same pain JJ must be feeling now. Soon, Valerie places a call to Jenn. Later, Lani arrives. She learns from Valerie that Abe has become forgiving, but is mopey anyway. She won’t explain why. Eli arrives and takes Lani aside to explain that nothing happened between JJ and Gabi. She was just preventing his suicide. Lani beats herself up. Eli says last night never happened.

Eli joins Gabi and Ari in the square. They agree to enjoy the day. Abe arrives at JJ’s room. He explains that Jenn came to see him. Abe says a man he once hurt forgave him and freed him to move on. He’s realized that JJ was just doing his job. “I forgive you,” Abe says, adding he had no right to blame him. He encourages him to keep trying with Lani and invites him to visit Theo. JJ’s moved.

Back at the Horton house, Jenn and Eric talk about what a good team they are and hug. They nearly kiss. He gives her a friendship bracelet and explains he has a matching one. She needs to get to the hospital to read to the children. He exits. Kayla and Steve are in the square. They call Joey on the phone but it doesn’t feel like Christmas without the kids. Tripp shows up. Things are awkward. Tripp tells Kay that she’s shown him what family is. He thanks her.

Ciara is at the pub with Roman. Claire shows up and the ladies bicker until Roman orders them to cut it out. He makes them promise to behave and hug. Tripp, Kayla and Steve file in. Ciara makes faces. Jenn, Tripp, Kayla and Steve arrive at the hospital. They worry when Santa is nowhere to be seen. Jenn decides to read the story to the children without him. Before she can start, Eric arrives, dressed as Santa. They smile at each other. She reads the Christmas story and then Steve sings “Silent Night” with the kids. Meanwhile, Ciara and Claire arrive with a little tree for Theo. Valerie agrees to let them in to see him if they behave themselves. After they head in, Lani returns as JJ and Abe arrive. They all head in to see Theo together. Abe calls JJ over to the bed. They weep and embrace together. They hold hands and Abe tells his son how much they want him to wake up. When Abe takes his son’s hand, Theo wakes up.

Claire and Ciara have words.

Sonny Reminds Will of Their Life...