Thursday December 21, 2017: Gabi stops JJ from going through with his suicide plan, the Hortons gather to hang their ornaments, Claire and Ciara get into an ornament war, and Lani decides to fight for JJ. 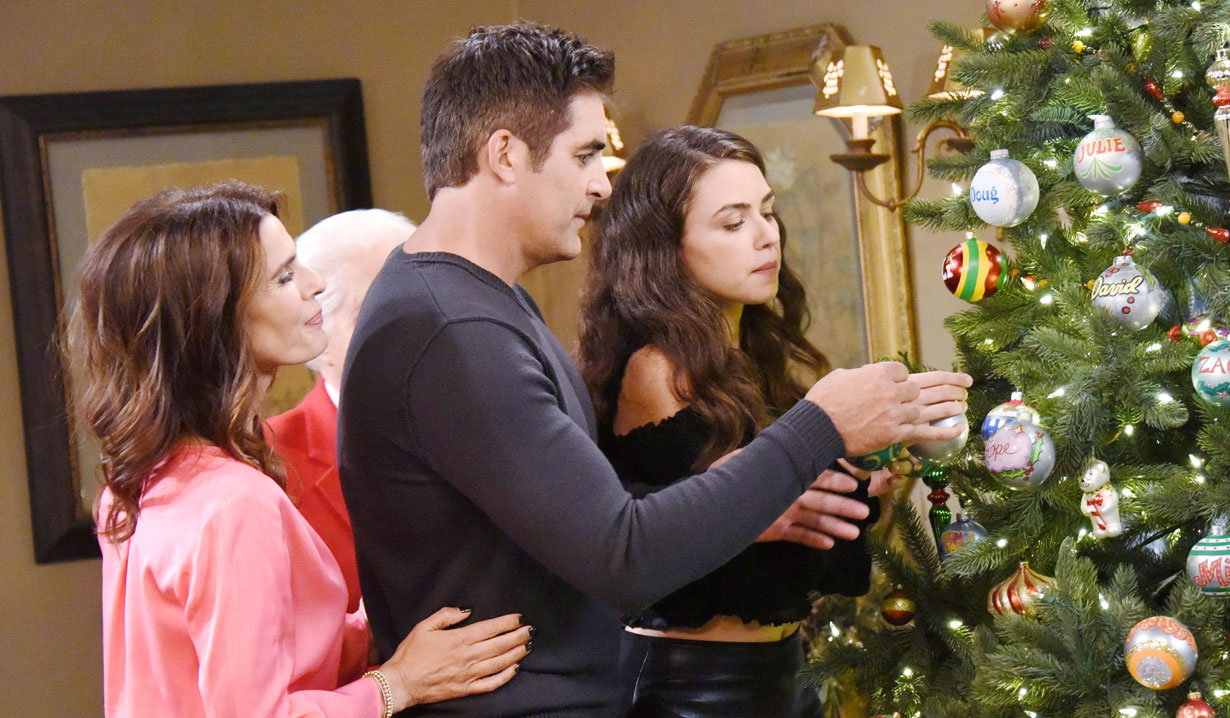 At the DiMera mansion, Abby and Chad share a kiss. She proposes they throw a big New Year’s Eve party for all their family and friends.

In the Horton Square, Gabi talks to Eli on the phone about meeting at Jennifer’s. She notices the candlelight vigil to Theo and tells Eli she has to make a quick stop but will see him there. At the hospital, Eli checks on Lani and invites her to come over to Jenn’s with him, but she needs to be here for her dad. Doug and Julie check on Theo, as Abe and Valerie sit by his bedside. Doug invites Abe and Valerie to join them at the Horton party, but Abe refuses to pretend this year is like any other. Doug hopes maybe they can attend next year, and Julie tells Abe they are praying for him and Theo. Doug and Julie leave, and Valerie gives Abe time alone with his son. In the hall, Valerie checks on Lani, and the two discuss JJ. Valerie knows Theo would want her to be happy, and she should fight for JJ. In JJ’s suite, he takes a call from Jenn and informs his mom that he is tired and needs a quiet evening alone, but will come by for Christmas morning. JJ puts his gun in his waistband and goes to leave, but finds Gabi at his door. She wonders why he’s in his dress uniform because Rafe only wears his for weddings and funerals. She notices the pile of letters on the desk, finds the one that has her name on it and opens it. She begs him to tell her this is not a suicide note. Gabi knows where he is because she’s been there too while in prison, but she realized suicide would only cause more pain and guilt for those she loved. He doesn’t want to hurt anyone, but he can’t fathom being happy and going on while Theo is stuck in a room hooked to machines for life. She can’t stop him from blaming himself for the shooting, but points out this will kill his mother. He thinks he’s only brought his mother heartbreak, and she needs to let him go because he can’t do it anymore. JJ pulls out his gun and says he is going to the square to end it, but Gabi refuses to let him. She opens up the letters he wrote to everyone and reads them all to him. She rips opens the gift Ari made him, a picture frame with her photo, and shoves it into JJ’s hands. JJ breaks down. He puts his gun away, and Gabi hugs him. She suggests they go to the Horton party, but he refuses to see anyone tonight. She offers to stay here with him then. She changes into a t-shirt, and he gets out of his dress blues. He thanks her, and she puts him into bed and joins him. As they hug, Lani slips in and sees them in bed together.

More: New DOOLMojis for the holidays Rafe and Ciara bring the ornaments down at the Horton house. He mentions that Hope said she had something to tell him. She remembers hearing Rafe and Sami discussing having sex. Before she can say anything, Belle, Shawn and Claire arrive. Hope, Jenn, Abby, Chad, Doug, Julie, Maggie, Sonny, Will and Arianna follow. Claire plans to go back to the hospital after she hangs her ornament, when suddenly Ciara accidently drops Claire’s ornament and it shatters. Claire grabs Ciara’s and shatters it in retaliation. Hope and Shawn pull the kids to separate corners, and Jenn suggests Doug make a speech. Doug reminds them they are lucky to have the family they do, and that Will is back in their lives. Julie also welcomes Eli into the family, and explains their family tradition of hanging their ornaments. One by one everyone hangs the ornaments on the tree. After, Jenn feels she should have forced JJ to come, and realizes there is something she needs to take care of. Later, Eli gets a text from Gabi saying she can’t make it because something came up.

Sonny and Will return to the mansion, and Sonny tells him that Ari will wake up ridiculously early, so they should get some sleep. Sonny goes to return to his room, but Will stops him.

Chad and Abby return to the DiMera mansion, put gifts under the tree, and then head to bed.

Claire returns to the hospital, and Abe thanks her for being here for his son. He gives her time with Theo. In the hall, Jenn approaches Abe, but he has nothing to say to her. She tells him to listen because she has something to say to him.

JJ Writes Suicide Letters As He...

Sonny Reminds Will of Their Life...