Brady and Victor Work Together to Set up Eve 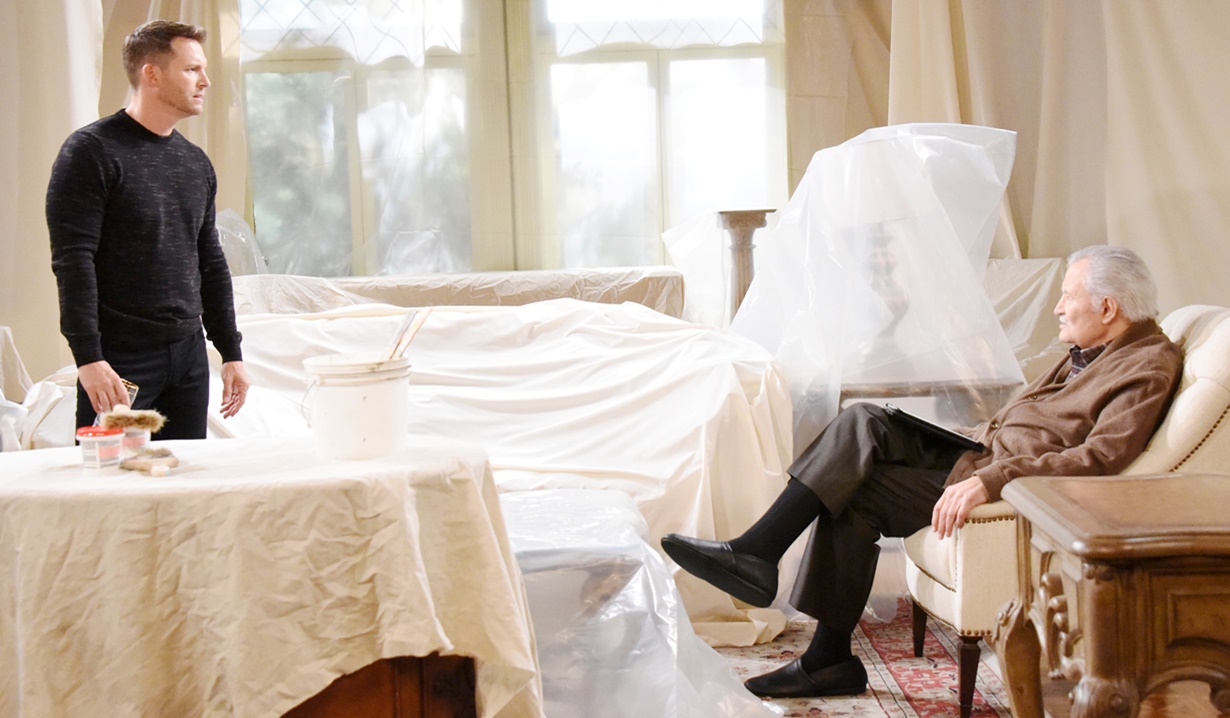 At the DiMera mansion, Andre hears Kate on the phone saying she’s stepping down as CEO. After, Kate informs him that Chad knows she sent Theo into the warehouse and wants her out of the house. Andre is taken aback, but Kate feels Chad won’t forgive her and she doesn’t blame him. She updates Andre on the recording and Theo’s procedure failing.

At the Kiriakis mansion, Brady, angry the water was shut off, suggests Eve pack her bags and get out of town. Eve mocks him, and they bicker until Justin interrupts. Brady asks Justin to inform Eve that no one wants her there. After, Eve sighs that Brady is right, and asks Justin to be her ally. He makes it clear his allegiance is to his family. Eve just wants to get Basic Black on track. Justin warns her not to undermine his son at Titan. Later, Brady grumbles to Victor that getting rid of Eve won’t be as easy as he thought. Victor snaps that his plan to take her down was an abysmal failure; he’s running out of patience. Brady counters that he’s trying to clean up the mess from Victor letting Deimos in. Brady then complains his grandfather has him doing the grunt work while Sonny keeps his hands clean; maybe Eve is right – Victor’s his enemy, not her.

In the Brady Pub, Marlena wants gift ideas for Brady, but John’s brain is fried from shopping. He mentions all Paul wants for Christmas is Sonny.

More: Matthew Ashford brings Jack back to Days this week At the square, Sonny tells Gabi he fought an old lady over the doll Arianna wants. Gabi reveals she got the doll, and adds Arianna will be thrilled to see Will. Sonny shares that Will is moving in. They discuss Gabi Chic; Sonny warns her not to trust Eve. Later, Justin joins Sonny, who enthuses about reuniting with Will. Justin cautions that Will is a different person now. Sonny feels it’s worth taking a chance. Talk turns to Justin and Adrienne getting it right this time. Sonny notes Paul was his first love – a part of him will always love him.

Will answers Marlena’s door to Paul. Will’s glad to see him again. Paul is looking for John, but Will reports he’s out. Paul looks shaken when Will says he’s moving in with Sonny. Will admits he feels something for Sonny that is worth exploring. Paul hopes it works out. He turns to leave, but Will stops him and hopes they can hang out. Paul retorts that he’s in love with Sonny. Will asks for Paul’s friendship, but Paul won’t do that to Sonny. Later, Marlena and Will say their farewells. He accepts her offer to stop by her office too, for therapy. He trusts her to provide guidance.

Gabi arrives at the DiMera mansion, where Andre stops Kate from telling Gabi she can’t make the deal. Andre drags Kate into the hall and advises her to lock this down and show Chad he can’t do without her. They rejoin Gabi and make a pitch. Kate asks her to sign on the dotted line as Eve bursts in and says, “Don’t sign.” Eve tells Gabi she’ll have carte blanche with Basic Black, as Kate notes the family is doing battle. Eve and Kate both hold out contracts. As Andre pushes for Gabi to sign with Kate, she snarks, “You don’t even like me.” Andre smoothly replies, “I do now.” Eve rolls her eyes, but Gabi ultimately signs with Kate. After Eve goes, they toast to making a great team. When Gabi steps out, Andre expresses admiration for Kate, kisses her cheek, and tells her to leave Chad to him. Paul appears in the square by Sonny and Justin, who leaves after a greeting. Paul lets Sonny know he just saw Will, and is aware he’s moving in. Sonny accepts Paul’s well wishes, and leaves after apologizing for hurting him.

In Brady Pub, Paul meets John, who senses he’s upset. Paul vents about Will moving in with Sonny, and how awkward it was between them. After, John finds Paul crying and holds him.

More: Holiday pre-emptions for Days and all soaps

Marlena tells Will his wedding to Sonny was the happiest day of his life as Sonny arrives at her house to pick Will up. Will tells him, “Let’s do this.” Sonny takes the bags, and Marlena embraces Will to whisper, “You deserve to be happy.”

Eve arrives at the Kiriakis mansion in time to hear Brady hollering at Victor about their deal to get rid of her. After Brady storms out, Eve muses, “Now that is something I can work with.” Justin appears and learns her deal fell through. Eve muses that a new opportunity just landed in her lap. Inside, Brady tells Victor he’s pretty sure Eve heard every word. “That bitch is about to fall right into our trap.”

JJ prepares to do something drastic.

Abe Vows to Get Justice After JJ’s...

JJ Writes Suicide Letters As He...