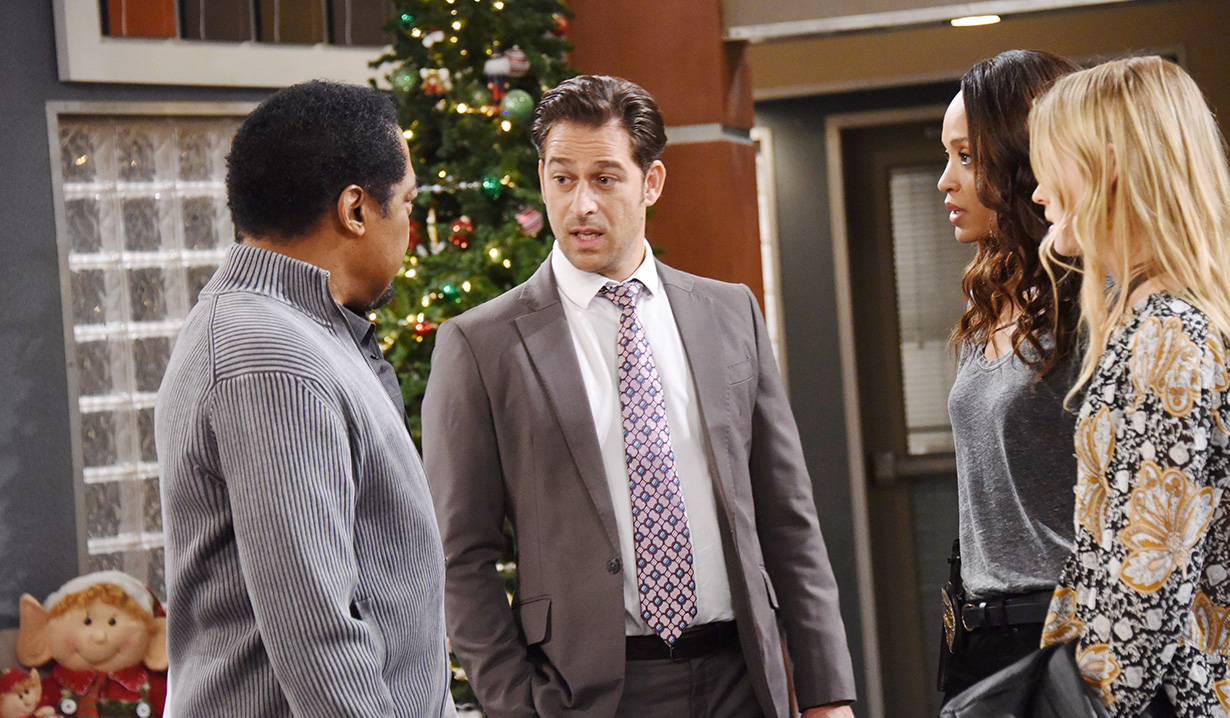 Steve visits Tripp at work to tell him that he and Kayla confronted Kate. Tripp’s not happy about that but learns Kayla couldn’t let it go.

Kate introduces Theo’s new doctor, Dr. Bretts, (played by Emmanuel Castis), to Chad at the mansion. Bretts is a coma specialist. Kate hopes he can bring Theo back to them. Bretts can’t promise he can or that Theo will be the same after. He goes and Chad tells Kate he’s talking to his lawyer, Belle Brady, today to discuss Andre’s involvement in Theo’s case. Kate defends Andre and looks worried. Chad gets a text from Steve and meets him outside for privacy. Steve reveals Andre isn’t the one Chad is after regarding Theo’s case. He’ll have proof for him soon. Chad goes and Steve heads inside to tell Kate that he’s not about to let Tripp or Kayla go to prison. “You win.” Kayla and Tripp are putting that situation behind them, which means they’re protecting Kate. Steve details everything she did starting with having Theo do her bidding up to covering up the evidence. He’s sickened. Kate tells him to keep his mouth shut about it. Steve grins and calls out, “Have you heard enough?” Chad walks in, stoney faced.

Abe and Claire sit with Theo in his room at the hospital. Claire’s upset that she and Theo had a misunderstanding before the shooting. By the hub, Val still feels guilty about Theo’s surgery landing him in this position. Lani comforts her. She did all she could. They embrace. Lani opens up about JJ dumping her. She loves him and misses him. Abe walks up and is snide, assuming they’re talking about the man who shot his son. Lani’s hurt. Dr. Bretts introduces himself to Abe, Dr. Grant, Lani and Claire. The specialist goes to examine Theo.

Ciara approaches Rafe at the park and flashes to seeing him and Sami talking about their fling. Rafe notices she looks upset and asks what’s wrong. She wants to use the bike and gives Rafe attitude until he asks what’s bugging her. She snipes at him for taking her mother’s job. Rafe explains that if it wasn’t him, Abe would have given it to somebody else. Rafe takes a call. From his room at Martin House, JJ flashes repeatedly to shooting Theo as he lies in bed. Abigail arrives and he tells her to go away. “When hell freezes over,” she replies. He lets her in and she hugs him. She asks him to shower so she can take him out. He doesn’t want anything and tells her to back off. He opens the door for her and Rafe’s standing there. He tells them the INS finished their investigation and has made their decision. Rafe goes and Abigail and JJ discuss possible prison time. JJ goes to shower.

Jenn and Kayla meet at the pub. Jenn’s a nervous wreck over JJ’s depression, even after his visit with Eric. Kayla believes JJ was only doing his job. Eric thinks if Theo comes out of the coma, JJ will start to forgive himself. Kayla tells her about Dr. Bretts’ arrival. Theo could be on his way to waking up soon. They talk about how Joey’s doing and Abigail rushes in to tell them the INS report is finished. Abs told Lani, too.

Ciara goes to Mandalay to find Claire and since Tripp’s there, she badmouths Claire to him. Tripp defends Claire who he sees as funny and talented. Ciara laughs that he has a crush on her. Ciara says Claire sees him as insurance while Theo’s out of action. She likes having hot guys follow her. “She’s nothing but a selfish little bitch.” Tripp tells her to stop it. They argue and she accuses him of making a move on Theo’s girlfriend, just as Claire appears. Claire says once Theo is awake, she wants Ciara to tell him every nasty thing that she’s been saying to her. Ciara looks slightly affronted but then asks why she ran from Theo’s bedside to Tripp. Claire’s just hungry. They go and Ciara walks to the park and calls her mother to talk, saying it’s important.

Back at the hospital, Abe takes Rafe’s call and learns the investigation over the shooting is over and Rafe has the results. Abe will be right over. Kayla arrives and Bretts is done Theo’s procedure. Lani finds JJ at SPD. JJ thinks she should be with her dad and brother. Lani lets JJ know about Bretts, the coma specialist. JJ hopes he can wake Theo up. Lani’s there for JJ. Abigail and Jenn appear for support and Abe arrives. He and JJ head to Rafe’s office for the report but Rafe points out that as the victim’s father, Abe really shouldn’t be there. Abe doesn’t care.

Ciara talks to Hope about her feelings.

Eve and Kate go to battle.

Sami and Rafe's Secret Is Overheard...

Abe Vows to Get Justice After JJ’s...