Sami and Rafe’s Secret Is Overheard by Ciara

Thursday December 14, 2017: Sonny kisses Will, Eve and Brady threaten one another, and Sami says goodbye to Salem again. 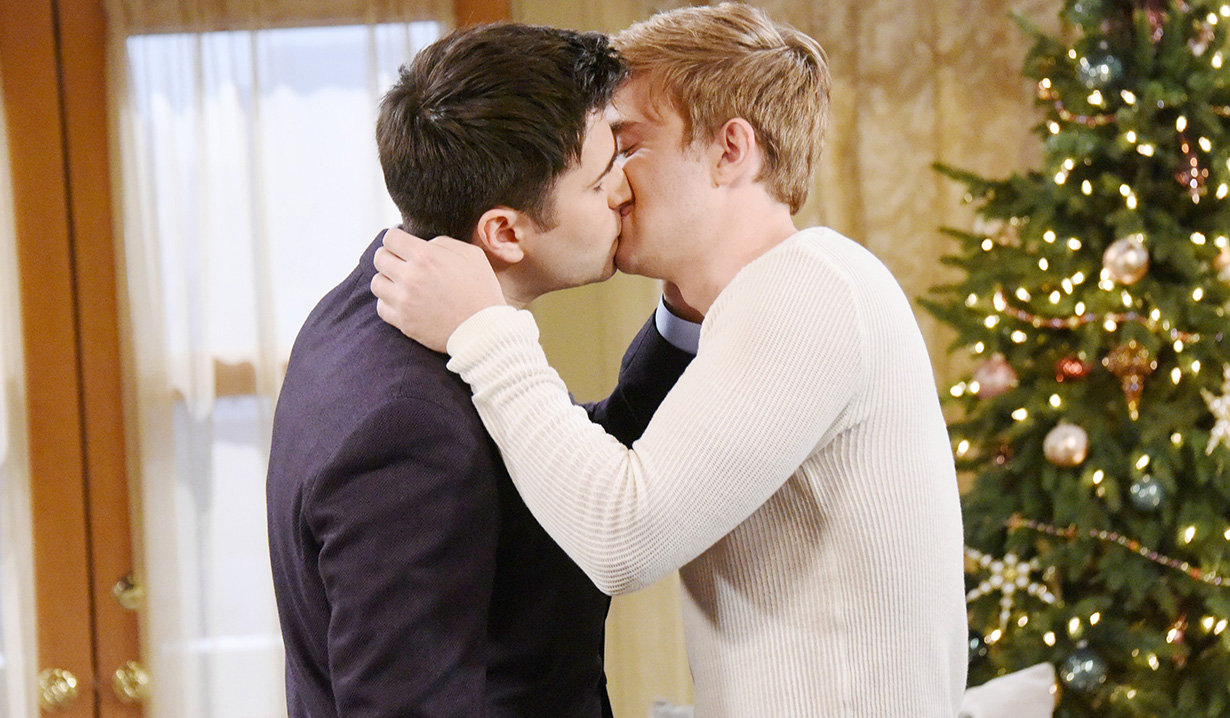 At the Kiriakis mansion, Brady tells Eve that the file he’s holding details what she’s been up to, which carries a threat of jail time. He knows she used aliases such as Chelsea and Blair to seduce old wealthy men. Neither names sound familiar to her. She brings up Brady falling off the wagon and threatens to tell Victor or Sonny. Brady’s not bothered by that. He has it under control. They argue about who will win the CEO position at Titan. Eve thinks Victor has given up on Brady in favor of Sonny. She keeps the files and leaves him her drink.

In the park, Hope’s complaining about Ciara defying her by stealing Bo’s motorbike from the shed when Ciara appears. The women argue and Rafe steps in. Ciara finds humor in this and tells ‘Commish’ to slap the cuffs on her. Hope defends Rafe and lets him talk to Ciara. He knows the bike brings her closer to Bo and when she gets a license he’ll talk to her mother about letting her drive the bike. Ciara’s miffed that he brought up Bo and snaps that he’ll never be the man her father was. Hope walks up and overhears. She orders her kid to apologize. Ciara runs away and Hope follows.

Sonny goes to Will at the townhouse. Sonny wants his husband back. Will asks him to start by explaining the official legal marital separation agreement. Sonny tells him it’s a lot to take in and reveals he and Paul broke up. He wants to make Will fall in love with him all over again. Will knows you can’t make anyone do that. There has to be chemistry and an attraction. Sonny asks why Will kissed Paul. Will learned he cheated on Sonny with Paul and wanted answers but kissed him because, “I wanted to. What can I say? The man opened the door wearing nothing but a towel,” Will states. Sonny asks if Will has feelings for Paul. “Maybe I do,” says Will. Sonny looks wounded. Will’s sorry but “There is no us.” Will finds Sonny very nice and handsome but he’s been in the closet so long because of Susan, he wants to experience being gay and single. Will holds his hand out and says, “No hard feelings,” and Sonny pulls him into a kiss. Will appears to enjoy it and they grin wildly at each other when it ends. Sonny asks if Will feels their connection and begs for a chance to explore it. Will pulls away. He doesn’t think they’re destined to be together. Sonny says he has made mistakes in their marriage but Will doesn’t think they’re as big as his. Sonny’s willing to start over. “I want you to get to know me,” he says. Will asks what step one is. Sonny wants him to move into the mansion with him. Will laughs. That’s not exactly taking it slow. Sonny says they’ll have separate rooms. Will admits he does feel a connection and if he can give his mother another chance, he can give Sonny one. Sonny’s thrilled. Will can’t promise anything.

Sami arrives at the pub with presents for Eric and Roman. They enjoy cookies and banter playfully. The mood turns when Sami tells them she’s leaving town to be with the kids for the holidays. The men try to convince her to stay through the holidays but she can’t. She loves them and misses them already. Roman goes to make her a sandwich and Sami assumes he didn’t want them to see him cry. Eric brings up Will and Sami tells him they’re in a good place. Roman returns with food for the road and Sami gets hugs and words of love from her brother and father. She goes and Ciara barges in. She asks Eric to buy her a drink. He refuses and asks what happened. Ciara’s mom is treating her like a child. She rode a bike in Hong Kong all the time. They talk about Theo and she tears up and goes.

Sami finds Rafe at the park with Bo’s bike. She thinks the badass look suits him. Rafe fills her in on Ciara “acting out.” Sami says Bo did the same thing and nobody accused him of acting out. Rafe laughs. Of course she’d side with the rebel. They talk about having sex and Rafe wonders if he should come clean. Sami nixes that idea. “It’d break her heart.” They hug goodbye.

At the loft, Hope asks Shawn how bad it was with Ciara in Hong Kong. He says she ignored curfew a few times and got into fights with her boss, but they had it under control. They assume she’s dealing with Chase raping her still and Theo’s shooting. Shawn’s always there to help. They embrace. She lets him know she and Rafe are engaged again.

Ciara returns to the park and overhears Sami and Rafe discussing their one-night-stand. She looks aghast.

Sonny Blames Paul When He Hears Will...

A Specialist Performs a Procedure on...