Eric Tries to Reach JJ, Who Is Beside Himself With Guilt 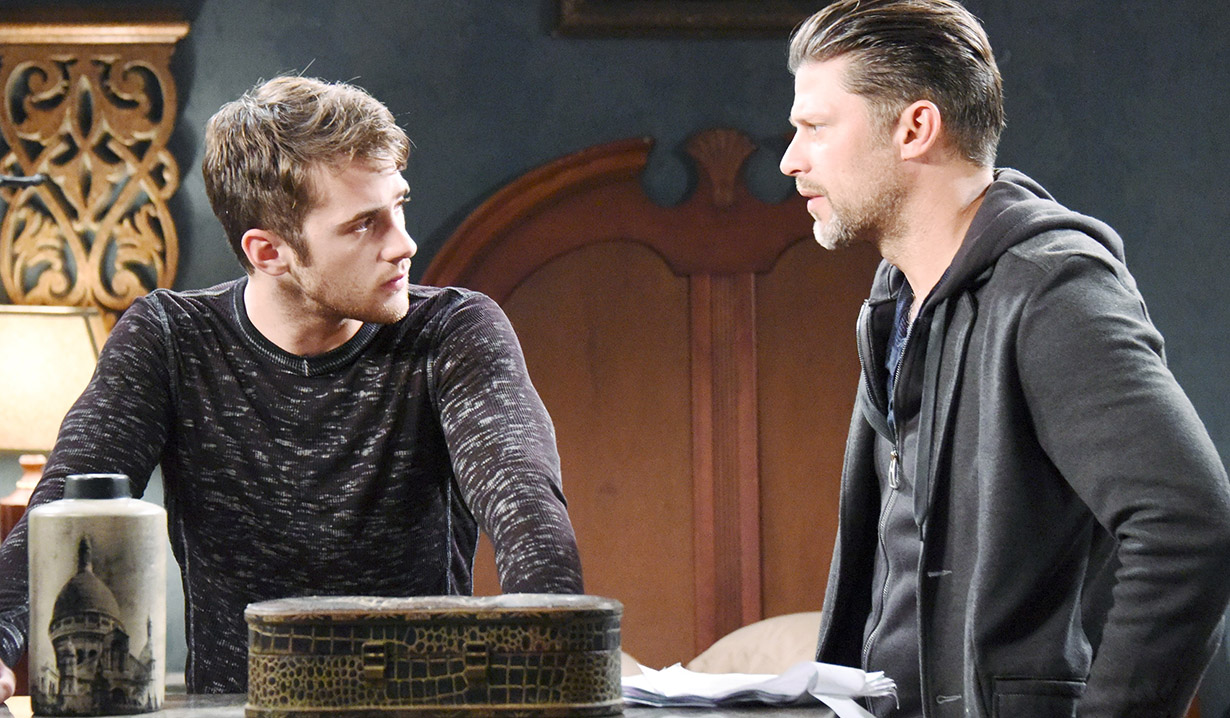 At SPD, Eli tells Abe that Theo was investigating a DiMera hacking when he broke into the warehouse. Though Andre and Kate deny knowledge of this, Eli knows there is more to the story. Inside Rafe’s office, Sami can’t get Hope’s engagement ring off. They argue when Rafe tries to pry it from her finger. Hope walks in and assumes Sami’s trying to get Rafe to drop the charges against her. Sami and Rafe pretend that’s what they were arguing about. Rafe flashes to sex with Sami and declares it’s out of his hands. She should talk to Justin about getting a deal. Sami agrees to talk to Justin. She tells them about her breakthrough with Will and drums up some tears. Hope goes to her purse to get a tissue, so Sami uses her tears to get the ring off. She gets it off and feigns that a contact lense popped out. She hands the ring over to Rafe, wrapped up in a used tissue and hugs Hope before going. Hope comments that Sami seems up to something.

Kate stops by the square and leaves a few dozen flowers at Theo’s vigil and says she’s sorry. Gabi finds her and they embrace. They catch up and agree to meet tomorrow.

At the DiMera mansion, Jennifer visits with Thomas, Chad and Abigail. Chad takes the tyke down for a nap and Jenn swoons over her daughter and son-in-law’s happiness. They worry over JJ, who isn’t returning their calls. Jenn hopes Eric can help him. She takes a quick call and when Chad returns, she explains that the DiMeras are suspect in Theo’s case. Does he have a quote for her? Abigail gives her a boilerplate quote and Jenn presses for more. Her reporters will dig deep. Chad says off the record, if he hears of any DiMera involvement he’ll take care of it.

Eric goes to JJ. They discuss the shooting and JJ’s guilt. He’s not sure how he can live with himself. Eric knows from experience that as dark as it may seem now, there’s still room for a meaningful life. JJ thinks it’s impossible. Eric says Nicole forgave him for killing Daniel, which helped in his self-forgiveness. JJ doesn’t think Abe will ever forgive him. Eric offers his bible but JJ’s not interested. Eric leaves the book and goes. “A bunch of stories written by dead people,” he says, before reading Exodus.

More: Days is nominated for an award At Doug’s Place, Julie has closed the club and set a romantic table for Rafe and Hope. Julie and Doug are positive their troubles will be sorted. Rafe and Hope arrive and Hope says she didn’t know Sami wore contacts. Rafe brushes off her questions and they talk about love and trust before Rafe gets on bended knee and asks for her hand. She says yes. They smooch. Later, Doug and Julie join them and Hope tells them the wedding will be soon. Doug takes Rafe to pick out Perrier-Jouet champagne and warns that he’d better treat his daughter well, while Hope confides in her half-sister-step-mother that she hasn’t been this happy since Bo. Abe asks Eli’s opinion if JJ was in the right. Eli thinks JJ could have approached the situation differently. Gabi overhears as she walks in and takes Eli aside to chastise him. Eli worries her defensiveness means she has unresolved feelings for JJ. Gabi says they’re friends and she can’t walk away from a friend. Eli’s sorry – he doesn’t want to lose her. He wants to make this relationship work. So does Gabi so they make out. Sami finds Kate at the square. Kate brings up the strangulation-recreation and Sami says she knows it was wrong. She’d rather talk about saving Kate’s son. Maggie has Lucas in rehab right now. Kate’s relieved. Sami tells her about Lucas’ accident and assures Kate he’s fine. Kate’s happy but sad to hear Sami’s leaving town already. They embrace. Abe strolls up to the vigil and he tells the women that “This has DiMera stink all over it.” If he learns she or Andre are responsible, “I swear to God,” he says. Sami defends Kate. Abe sneers and goes and Sami assumes Andre’s the culprit.

At the park, Jenn has met with Eric to discuss how to reach JJ.

Will Finds Hope's Ring in Sami's...

Sonny Blames Paul When He Hears Will...