Monday December 11, 2017: Eli gets a lead in Theo's case, JJ's spiralling downward, fast, and Will considers that Sami may not be as bad as he thought. 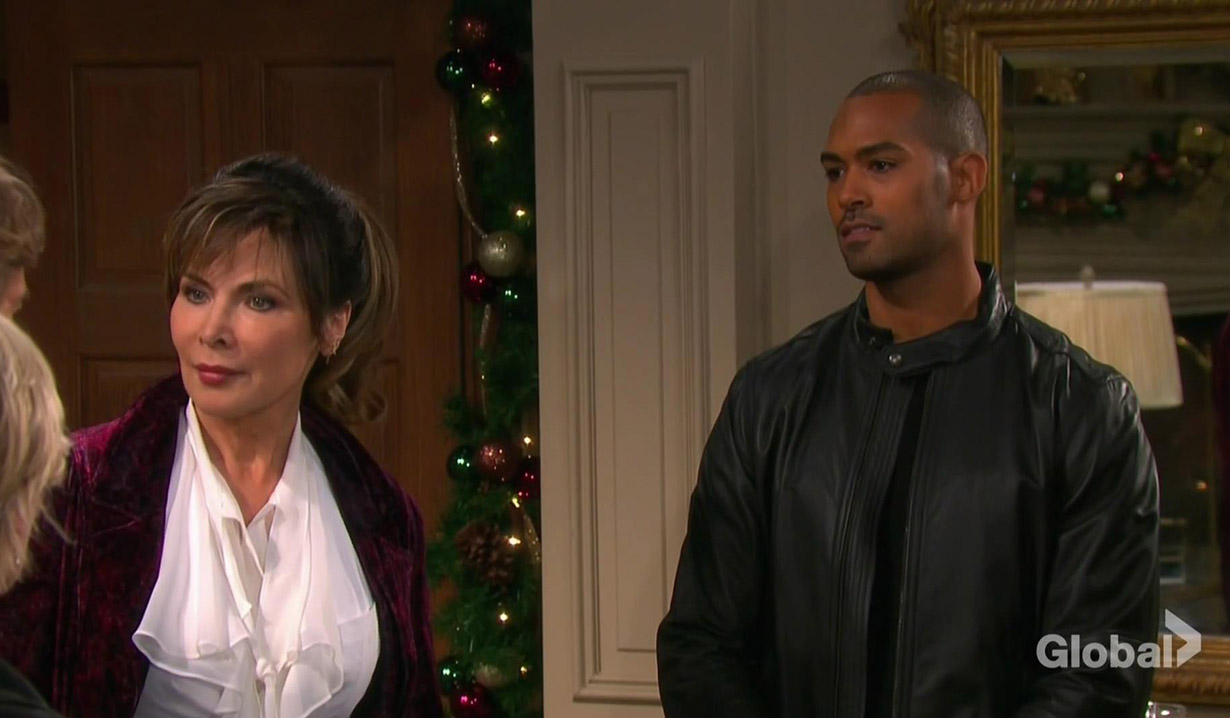 At the DiMera mansion, Andre and Kate discuss Tripp knowing her secret. Andre asks what she’s holding over Tripp’s head. “Kayla’s medical license for one,” Kate says. She’s concerned Steve and Kayla will find out and tell Chad.

At the pub, Steve fills Kayla in on Kate blackmailing Tripp. They take off to confront “that scheming bitch.”

Laden down with Christmas packages at the park, Hope calls Rafe and they make plans to dine at Doug’s Place. After they disconnect, JJ calls Hope to meet.

Eli sees Rafe at SPD. They accessed Theo’s laptop and came up with clues as to why Theo broke into the warehouse. He was investigating a DiMera hacker, hoping to catch them. Rafe wonders if someone put him up to it. The warehouse, Eli says, is owned by CFR Partners. Rafe’s grateful for Eli’s good work. Eli heads to see the DiMeras. Once he’s left, Rafe searches for Hope’s ring.

Eric and Jennifer bump into each other at the square. Envelopes go flying and they get a table and catch up with talk over Will’s return and the strangulation-recreation. Jennifer’s blown away. She wishes she could do something to help JJ. Will visits Sami at Salem Inn. He tells her Eric urged him to get to know Sami, explaining she’s not as crazy as Will thinks. Sami’s happy to be talking with him but she’s leaving town to be with the other kids. Will understands. Sami also thinks it’s best for Will if she leaves. Will nods. Sami knows she can be crazy and selfish but there’s nothing she wouldn’t do for her kids. “You definitely keep things interesting,” he tells her. He brings up seeing photos of his wedding. He heard Sami was thrown at his coming out but eventually his biggest champion. Will talked to Eric about the strangulation and he admits he started to remember something. It’s made him realize she did all of that out of love. He says he’s been unfair to her. Sami apologizes, knowing she could have handled the situation better.

Will, “I’m sorry for hurting you.”
Sami, “I’m sorry that I sicced a serial killer on you.”
Will, “Apology accepted.”

Will finds Hope’s ring on the carpet and hands it over to Sami. She stammers and slyly takes off her own engagement ring and puts it in her pocket while pretending that Hope’s ring is hers. They shake hands.

Hope goes to JJ’s room at Martin House. He looks tired, she comments. He can’t sleep. He just keeps seeing Theo. JJ feels responsible for her losing her job and resigns. Hope refuses to let him. JJ’s so sorry for ruining first Theo’s and now her life. Hope tells JJ that he’s a good cop and did what any cop would have done. JJ doesn’t want to discuss it any longer and opens the door for her to leave. Hope offers to call downstairs for some food but he doesn’t want any. She offers to call Lani but he reveals that he dumped her. He asks Hope to go and once she does, he has flashbacks to the shooting and a panic attack. He puts on music, trying to block them out and doesn’t work. His stomach becomes ill.

Back at the mansion, Kayla and Steve barge in and confront Kate over blackmailing Tripp. Kate denies it and they start to argue when Eli walks in. Steve refuses to let Kayla tell Eli about Tripp. They leave and outside, Steve says they can’t play their hand just yet. They go while Eli shares what little they have on the investigation. Kate lies that she had no idea Theo was pursuing this on his own. Eli tells them Theo purchased the items for the break-in with the DiMera corporate card. Kate shrugs that off, saying he has his own card. If they knew Theo was involved in anything dangerous, they’d have stopped him. Eli goes and Kate calls Kayla with a threat to keep her mouth shut.

Hope stops by Eric and Jennifer’s table at the square. She fills them in on her visit with JJ. Jennifer’s more worried about her son than ever, so Eric goes to see him. Hope tells Jenn that she and Rafe are re-engaged.

Sami visits Rafe with Hope’s ring. He’s relieved but asks why she’s wearing it. She explains about Will’s visit. He’s happy for her. Sami tries to get the ring off as they talk. Rafe tells Sami about the re-engagement and notices the ring isn’t coming off. She tells him it’s stuck and Hope walks in!

Eric arrives at JJ’s to talk. Eric thinks he knows what JJ’s going through more than anyone.

Will arrives home and smiles at the photo of him with Sami. “Maybe she’s not so bad after all.”

Doug has a warning for Rafe