Friday December 8, 2017: Sami is close to getting Lucas sober, Eric gives Will a rundown on his past, and Brady asks his brother to find something on Eve so he can use it against her. 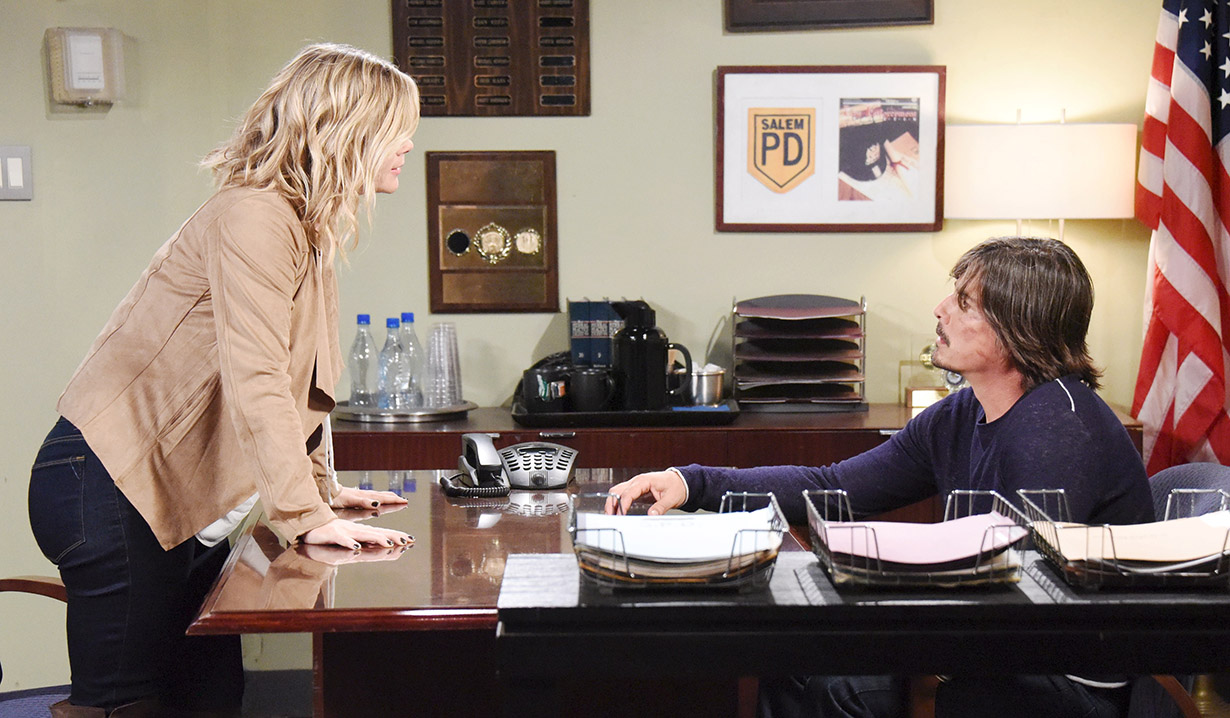 From the square, Sonny leaves a message with Will to call him, then notices Victor having tea nearby. Victor asks him to sit and can tell he has something on his mind. Sonny opens up about Will’s return from the dead and his amnesia. Victor says, “Good. So you and Paul are alright then?” Sonny divulges that he broke things off. Victor thinks he is out of his mind for throwing a man like Paul away for “An adulterated momma’s boy.” He assumes Will is going to hurt Sonny again and urges Sonny to just divorce him. Sonny feels he owes it to his daughter to work things out. Vic hopes his personal issues with “Sami Jr.” won’t cause issues at work. If they do, he’s out of the company. He doesn’t want scandal in the company again.

Paul stares at his engagement ring in his room at Martin House, looking stunned. Brady arrives with a job for him. Paul learns that Brady wants Paul to get some dirt on his uncle Deimos’ widow, Eve. Paul’s confused. He thought they were friends. Brady replies that they were, and launches into an explanation, but leaves out the murder accusation. Paul agrees to look into it. Brady gives some history, telling Paul about the book Jack wrote on veterans that Eve took him to court for, forcing Jack to give her all the proceeds. He needs something to neutralize her. Victor’s trusting him with this and it needs to be successful and confidential from their father or Steve – even Sonny. Paul explains that Sonny dumped him for Will. Brady’s angry on his brother’s behalf. He knows what that feels like and offers to lend an ear if needed.

Maggie arrives home to the mansion and yelps when she runs into a man moving out her furniture. She demands answers from Eve who says she’s only trying to “class this place up a bit.” She finds it tacky and asks if Maggie’s decorator was Eisenhower. Maggie discloses that she decorated. Eve concedes that the sofa’s okay. They get into it over who murdered Deimos and disagree over who killed Deimos. Maggie asks why Eve doesn’t just move into her own house but Eve admits she’s enjoying making Maggie’s life miserable. Maggie almost misses Bonnie Lockhart. She thinks Eve’s vindictiveness is going to ensure that she’s left all alone. Eric visits Will at Marlena and John’s townhouse. Will’s on edge upon learning Eric’s his mother’s twin. He thinks Eric’s there to defend Sami’s actions. Eric knows since Will’s return, she has blown things with him. Will asks if she’s always been mentally unstable. Eric says it started after Sami walked in on her mother cheating on Roman with John. It changed her life. Eric gives Will a history lesson and tells him about the time he was so protective of Sami that he shot EJ. Will’s disturbed that Lucas took the jail time for him. Eric’s point is that there are similarities between him and his mother. Will isn’t sure what to do with this. Eric thinks his mom deserves another chance.

Sami arrives at SPD after receiving a call from Lucas. He’s pretty beat up from rolling his car after driving it loaded. Lucas didn’t think he was that drunk but hates his life. Sami swears he’ll sober up or stay in jail. He doesn’t want to. Sami says his kids need him. Lucas whines that his son can’t remember him and he never gets to see Allie. Sami flips. He can see Allie whenever he wants. Sami needs Lucas sober so he can be there for Will but Lucas weeps that he’s not sure he has it in him. Sami believes in him. She asks him not to take a drink just for today. Tomorrow he can call her and promise he won’t drink another day. They’ll keep doing it until he’s sober. If Lucas won’t even try, then he’s dead to her. He asks how to do this. Sami says to lean on those who love him. She hands over his phone so he can make the first step.

Sonny Dumps Paul for Will but Will's...

Will Finds Hope's Ring in Sami's...