Sonny Dumps Paul for Will but Will’s Interest Lies Elsewhere

Thursday December 7, 2017: Sami opens up to Eric, Will demands Sonny tell him why he pretended their marriage was fantastic, and Ciara moves back into the loft. 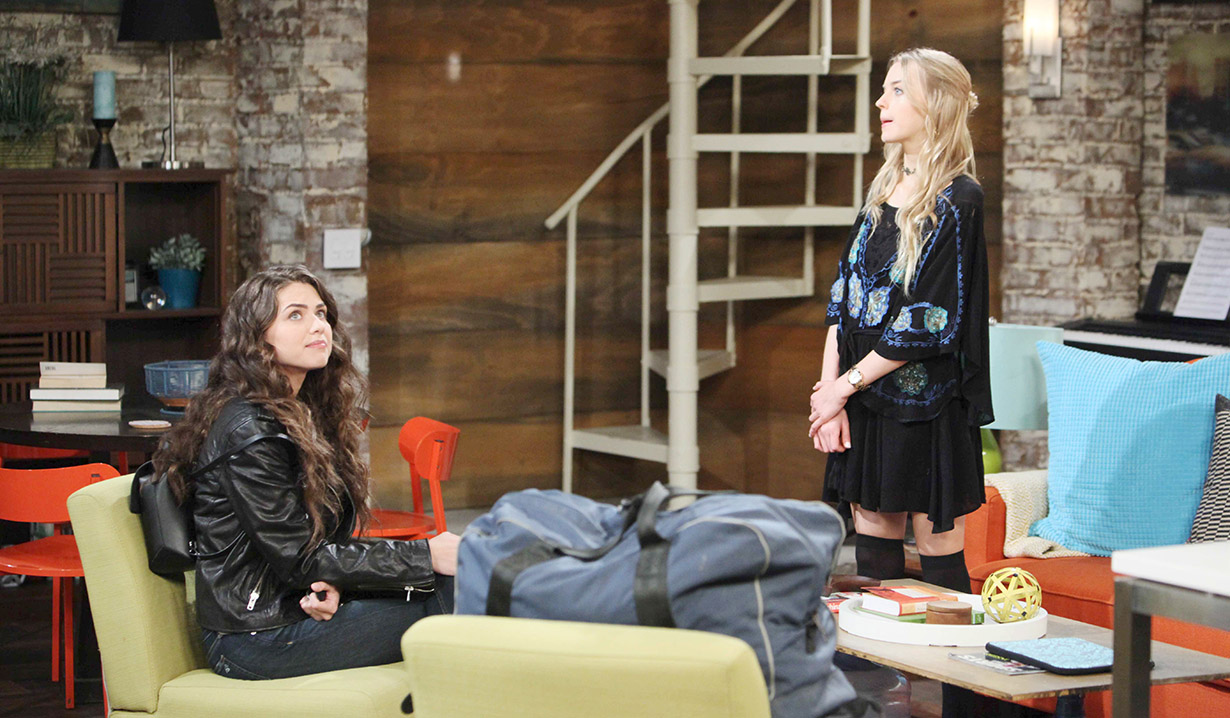 At the loft, Claire ends a call with Tripp when Ciara lets herself in and announces she’s moving back in. She’s done with being gullible and won’t let Claire take things that belong to her. Claire points out that Theo doesn’t belong to either of them. He chose her. She tells Ciara to stay in her room and she’ll use Theo’s. She goes. Once she’s gone, Ciara fantasizes that Theo has professed his love for her and kisses her. She breaks a photo of Theo and Claire in anger because her fantasy isn’t reality. Steve finds Tripp at Mandalay. He asks what his son is hiding about Kate DiMera. Tripp looks worried and tries to make light of it but Steve won’t gloss over it. He calls Kate a barracuda. Tripp finally lets his dad know that he overheard Kate and Theo talking about doing a crime. Later, when Theo was shot, Kate remembered the conversation and used it to threaten him. She ordered him to give her Theo’s phone so she could delete her voicemails to him. If he didn’t, she’d spill it that he almost ruined Kayla’s career. Steve vows that Kate won’t get away with this.

Kate visits an unconscious Theo at the hospital. She’d give anything for him to come back to them. To forgive her. Kayla appears and questions her words. Kate lies that she promised Stefano she’d look after Theo. Kayla brings up Kate discussing Tripp’s donation to the hospital with him. Kate shrugs it off and makes a beeline for the door when Claire arrives. Claire tells a comatose Theo that Ciara’s back. She apologizes to him for saying that Tripp understood her better. Ciara walks in. Claire isn’t happy to see her but leaves them alone. “Just try not to be such a bitch,” Claire says. She thinks Theo senses their moods. She goes and Ciara cries that this is Claire’s fault. Later, Kayla finds Kate again and Steve approaches the women. Steve’s hostile. Kate takes off and Steve fills Kayla in on Tripp’s story.

Eric comforts Sami in her room at Salem Inn. He’d have been there sooner but only found out about the strangulation-recreation today from their dad. He asks what she was thinking and then comments on her trashing the place. He did that when Nicole dumped him. Sami knows she screwed up this time with Will. He hates her. Eric gives her some tough love but she’s tired of hearing it and gives him the boot. He won’t budge. He knows the truth hurts but he also thinks there’s a part of Will that knows she did the recreation out of love. Sami muses about making mistakes, “like last night,” she says. Eric grimaces. Sami won’t discuss it and talks about needing to get back to the kids. They agree that time apart from Will could help with forgiveness. Sami thinks Nicole was stupid to leave her brother. They banter a little and say goodbye. Afterward, Sami gets a shocking call. She asks, “Oh my God, what are you saying? Is he alive?”

In his room at Martin House, Paul makes out with Will. Sonny knocks and Paul pulls away. Will tells him to ignore it but Paul can’t. Sonny calls Paul’s name. Will opens the door and grins. Paul says Will’s there to learn more about his life. Sonny asks why he’d go to Paul of all people. Will says Paul had the guts to tell him who he really was, warts and all. It was more interesting to him than knowing there’s a Christmas ornament with his name on it. Paul shakes his head, thinking that was rude. Will points out that they clearly didn’t have a perfect marriage. Why did Sonny lie? Sonny knows they’ve a lot to talk about. Will doesn’t really care and leaves. Sonny tells Paul that they’re over. Paul muses that he’ll wait. Sonny says whether Will remembers him or not, he loves him and wants to be married to him. Paul tears up and looks lost. What if that’s not what Will wants? Sonny says he and Will can deal with that together.

Claire goes to Tripp at Mandalay and blathers on about Ciara. Tripp’s not listening.

More: Congrats to Days on their Writers Guild Nomination

Eric visits Will at the townhouse. He introduces himself as Sami’s twin. Will says if he’s anything like Sami, they won’t get along.

Will's Attraction to Paul Leads to a...