Will’s Attraction to Paul Leads to a Kiss

Wednesday December 6, 2017: Sami and Belle argue about Will and who Sami has become, Will goes to Paul for answers and finds he's attracted to him, and Rafe and Hope repair their broken engagement. 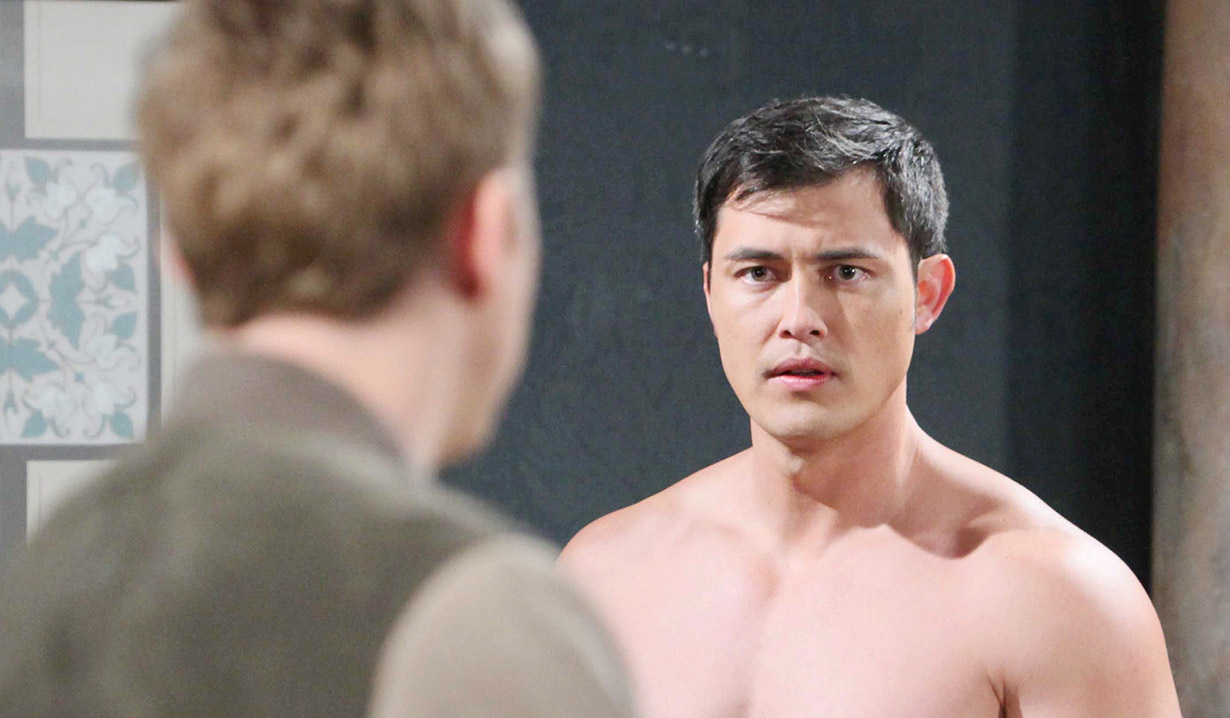 In the park, Hope asks Rafe where he’s been all night. Rafe flashes to making love to Sami. Hope tells Rafe she loves him and the reason she didn’t want to marry him was because she was worried about losing him the way she did with Bo. She wants to be open and honest. She’s so sorry. He’s nothing like Aiden. Rafe has never given her reason to think so. Rafe looks guilty. He needs to tell her something about Sami. Hope knows they’re friends. Rafe knows Hope needed him when Theo was shot. She says she deserves to be with a better man then wonders if Eduardo left because he knew he couldn’t live up to the man Adriana saw him as. Hope wants to move on and gets down on one knee. She asks Rafe to marry her. Rafe’s visibly touched and exclaims, “Yes!” They kiss, joyfully.

At Sami’s hotel room, Sami accuses Belle of stabbing her in the back by giving the DiMeras all the money she gave her. They argue over that and get into it about the death recreation. Sami defends herself. Belle thinks they should look to Marlena, a trained therapist. Sami says Belle lives in her head, has never risked it all. Belle knows what her sister did was self-serving. Just like the DiMeras, just like Stefano. Belle brings up some misdeeds of Sami’s past like the time she tried to sell Belle on the black market and when she became Stan. Sami cries. Sami screeches about mourning her son for two years and Belle tears up. Sami kicks Belle out and then trashes her room. She screams into a pillow and sobs.

Chad arrives at the Kiriakis mansion to talk business with Sonny. Sonny’s head isn’t in it. He’s thinking of Will. Chad asks if his feelings for Will are based on guilt. Sonny feels he should have felt that his husband was alive. Chad says, “You can’t rewrite history. He cheated on you with Paul. You couldn’t forgive him then. What makes you think you can now?” Sonny’s afraid he’ll never get Will out of his head and heart. Sonny loves both men but will stand by his vows to Will.

A shirtless and towel clad Paul opens the door to Will at his Martin House room. Will has questions for him. Paul says to come in and he’ll dress. “What’s the rush?” Will asks, sweeping his eyes over Paul’s rockin’ body. Paul goes to dress and Will apologizes for staring. He’s had to hide who he was from Susan for so long. It feels good to admit when he’s attracted to someone. Paul’s jaw drops. He and Sonny are engaged and he loves him. Will knows. He asks if the sex between them was good. “For my mental health I need to know.” Paul’s speechless. He finally says yes it was good. Will wants details. How did they hook up? Paul explains how they met. Will grins. He asks if it means his marriage to Sonny wasn’t all that and a bag of cookies. Paul refuses to get into that. Will thinks it means Paul’s a good guy. Paul’s not so sure. He tells him about lying to Sonny when he first saw Will was alive in Memphis. Will shrugs that it was only “for a whole day.” Maybe it’d be better if Paul kept it a secret for good. Will doesn’t know who Will Horton is or if he wants to be that person. There’s a lot of baggage, pressure and pain. Paul sees things differently. This is Will’s home. A lot of people love him. Will’s sorry for using Paul and outing him before he was ready, when he was a reporter. It was wrong, even if he doesn’t recall it. Paul’s thankful. He says he didn’t know that Will was married to Sonny at the time. Paul admits he gave Will permission to out him. Will says nobody should be ashamed of who they are. He says everyone in Salem wants him to be someone else but when he’s with Paul, he can be himself. Will apologizes for staring at him earlier. Paul laughs and calls it flattering. Will hopes they can be friends one day. He then grabs Paul in a kiss, just as Sonny appears outside the door. At the pub, Eric and Roman laugh over old homemade decorations and Roman updates Eric on Sami recreating Will’s death. They worry about her losing Will permanently. Roman hopes his son can get through to Sami.

Eric lets himself into Sami’s room at Salem Inn and sees the mess. He goes to her, holding her as she cries.

Belle goes to Chad at the DiMera mansion. He needs her help in finding out who it is.

Sonny arrives as Will kisses Paul.

Will Is Disgusted After Hearing From...

Sonny Dumps Paul for Will but Will's...