Friday December 1, 2017: Sami and Rafe comfort each other, Claire and Tripp hold a candlelight vigil for Theo, and Jennifer helps Hope figure out the real reason behind Hope's fear of committing to Rafe. 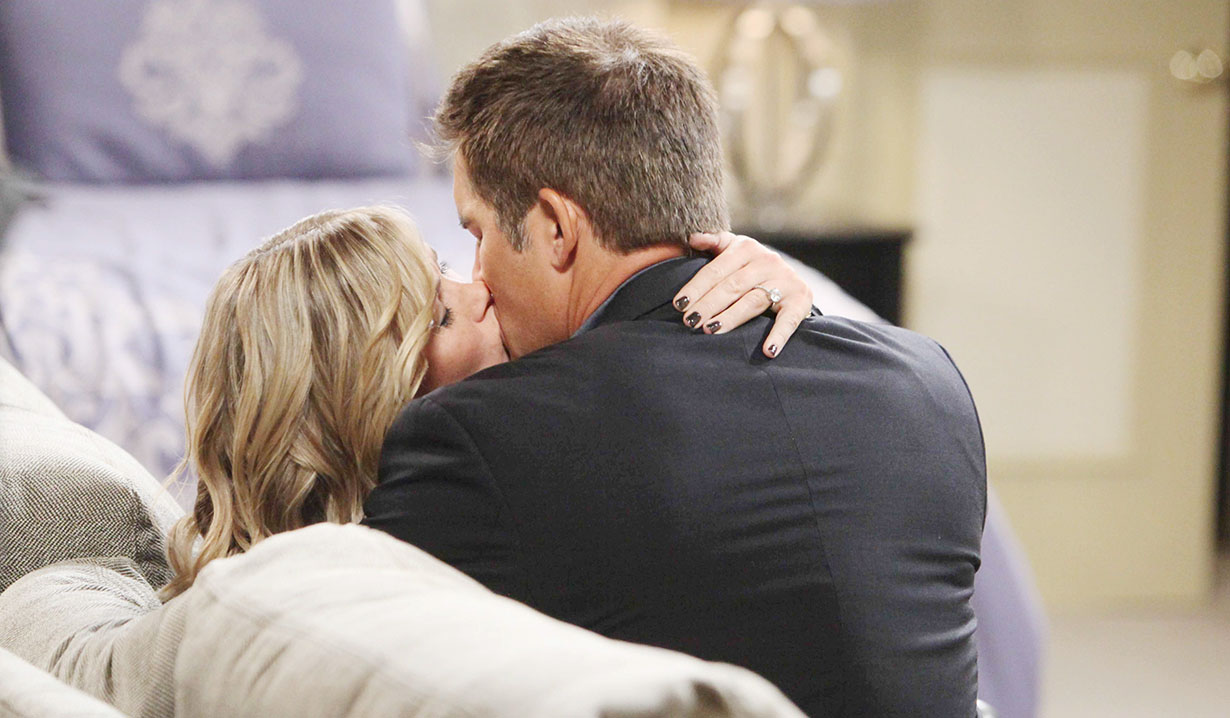 Hope clears out her office at SPD and looks longingly at a photo of her and Rafe. Jenn helps her back as they discuss Rafe taking over as commissioner in the interim. Hope finally reveals she and Rafe broke up and the reason behind it. She’s not sure she’s ready for marriage. Jennifer thinks there’s hope as long as they love each other. Hope admits if something happened to Rafe the way it did Bo, she isn’t sure she could survive it. Hope eats a chocolate and listens as Jenn tells her that this is her chance now to move forward and trust Rafe with her whole heart. In interrogation, Gabi talks to Eli about JJ deserving a chance to protect himself. Eli thinks this is about JJ seeing a black kid in a hoodie. Gabi finds that ridiculous. “He has a black girlfriend.” Eli talks about how too many white cops use excessive force on black kids. Gabi understands that but calls JJ a good person. She doesn’t like Eli calling JJ a racist and stomps out.

Rafe walks Sami back to her room from the square. She talks about her and Will having a fight. “My son hates me,” she says. Rafe asks what she did exactly. Sami’s evasive but then admits she ‘may’ have been a little extreme and recreated Will’s death. “I snuck Ben Weston out of that nuthouse to attack Will. Again.” Rafe looks dumbfounded and utters, “Oh no.” Sami finishes the story and worries Rafe is going to turn her in to his “commissioner fiancee.” Rafe says she’s not commissioner anymore nor is she his fiancee. Sami’s startled. Rafe spells out what happened. Rafe brings up Bo being Hope’s soulmate and doesn’t think she has room in her heart for anyone else and Rafe can’t compete with a ghost. He determines that it’s for the best. They have drinks and commiserate. Sami says she’s done with men. She has her kids and self-improvement to focus on. Rafe doesn’t think she should give up on love. Sami can’t live with herself for failing her son. She starts to sob and Rafe hugs her. Sami pulls away and they’re about to kiss when Sami apologizes. Rafe talks about his heart being ripped out by Hope. They tell each other they’re always there for one another, and then start making out.

More:eeney in Christmas at Holly Lodge

At the hospital, Lani tells her dad that JJ broke up with her. Abe’s sorry she’s unhappy. Lani’s focus is on family. They embrace and Lani goes when Val interrupts. Val apologizes for Theo’s surgery, still convinced her hand was shaking and it caused the embolism. Abe hugs her as she cries. He doesn’t believe that.

JJ finds Claire and Tripp at the square and asks after Theo. There is no news. JJ apologizes. He’d give anything to go back and change what happened but he has to live with it. Claire tears up and asks how it happened. JJ has no answers as to how it could have been avoided. He runs off. Claire hates to see JJ and Theo’s family suffer. She feels helpless because there’s nothing she can do for anyone. Tripp has an idea.

Gabi drops by Martin House with a burger for JJ. He’s not up for company but lets her in anyway. He thought she was out with Eli tonight. Gabs tells him she and Eli had a disagreement. JJ tells her about breaking up with Lani so she could focus on her family. Gabi’s sorry. JJ wonders if when Lani looks at him, all she can see is the guy who shot her little brother. Gabi knows JJ didn’t hurt Theo on purpose. Gabi blurts by accident that Abe backed off from firing JJ. She kicks herself and apologizes but explains that Abe wanted Hope to fire JJ and when she wouldn’t, she was fired. JJ’s more upset than ever, calling it his fault. Gabi doesn’t think it’s fully registered. He made a split second decision. JJ can’t get past being the reason Theo’s in the hospital. He cries on Gabi’s shoulder.

More: ‘Shelle’ returns to Days of our Lives Back at the square, Claire and Tripp set up a candlelight vigil to show support for Theo Carver with Eli, Lani, Abe, Val, and a few unknown Salemites. Claire thinks that Theo will feel their love. Everyone lights candles and Abe cries as he tells them how determined Theo has always been. Claire sings a song she wrote for Theo. Afterward, everyone is leaving when Ciara, (played by Victoria Konefal), shows up on a motorcycle.

Ciara has a stern warning for Claire.

Both Ben and Will Call Sami a...