Thursday November 30, 2017: Rafe and Hope argue to the point of break-up, Ben frees Will, who launches a tirade on Sami, and Chad apologizes to Andre. 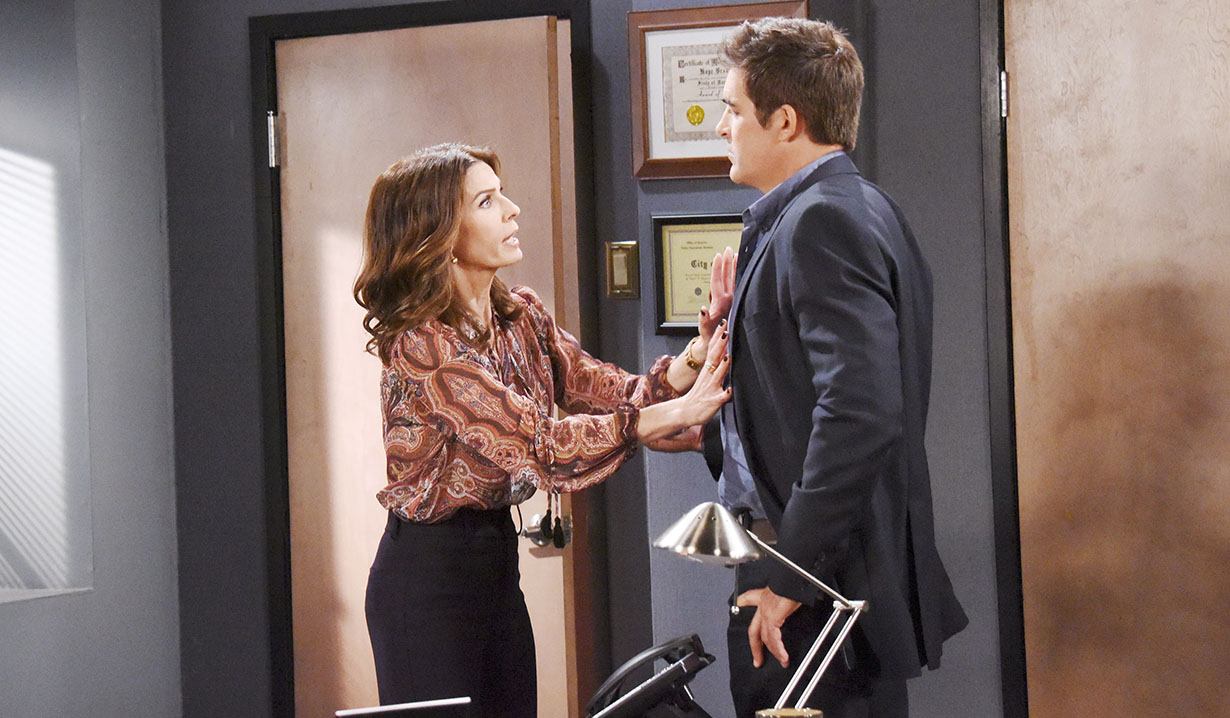 In their bedroom, Abs asks her husband to change his mind about kicking Andre out but Chad snaps that he won’t. He’s sorry for snapping at her. They profess their love and Abs thinks they need to stick together as a family. They’ve no proof that Andre was responsible. She asks Chad to think about Thomas. Chad stays firm. Abby worries about what Andre would do without them all. Down in the lounge, Kate blurts to Andre that she’s the reason Theo was shot. She asked Theo to look into their saboteur, to do what they had to do. She didn’t ask their IT department because she thought Andre was the hacker. Kate doesn’t know what to do. Andre wants to tell Chad but Kate begs him not to. He asks how the police didn’t find her voicemails on Theo’s phone. She reveals she deleted them and asks what he plans on doing. Chad and Abigail appear. Chad apologizes to his brother. He doesn’t want him to move out. He and Abby leave and Andre says he won’t let Kate forget what she did but she’s a DiMera and they need to stick together.

At the police station, Hope admits maybe Rafe is right, that she doesn’t want to get married. Rafe asks why. Hope begins to think it’s self-preservation because she jumped into things with Aiden too fast. Rafe’s shocked. Hope wonders if something is wrong with her. She isn’t sure she can trust anyone. Hurt, Rafe yells that it’s more that he’ll never be Bo. Hope wasn’t expecting that outburst. When pushed, she reveals that he’s right. “You’ll never be Bo. No one will ever be Bo. Are you happy now?” Hope says Bo was her soulmate, and Rafe knows what losing him was like for her, but she felt heart and soul for Rafe. She wants to go back to the way things were but he can’t because she’s not committed to him. Rafe thinks it’s best to end things. Hope cries and returns his ring.

At the townhouse, Lucas tells John and Marlena that some guys kidnapped Will. And this time he knows Will is alive. They discuss who could be behind it until Marlena realizes it’s Sami.

At Ben’s apartment, Sami hides as Will is strangled by Ben. Will has flashbacks to being strangled the first time. When Will begs, Ben cries and stops. “I can’t. I can’t hurt you again,” he says. Ben apologizes and throws Sami under a bus, citing that it was her idea. Sami appears, looking sheepish and disturbed. Sami yells for her goons who rush in. Will coughs and tries to catch his breath. The goons cuff Ben as Sami explains the reason she did this was to bring his memory back. “What is wrong with you?” Will asks. “Calm down, you’re okay,” Sami says. She can tell that he was beginning to remember. Will yells that she’s a terrible human being. “I never want to see you again as long as I breathe,” he croaks. He goes and Ben yells at Sami, calling her a wacko and a crappy mother. Sami yells back that Ben wimped out before Will remembered everything. She blames Ben for Will thinking he’s a monster. Ben yells that she’s sick and needs to be in a padded room.

More: Days blog on Will & Sami being like night and day

Will arrives at the townhouse and Lucas rushes to him to see if he’s okay. Will’s not, because of “that crazy bitch, Sami.” Will tells them someone strangled him. Lucas has a fit and when Sami walks in, he screams at her. Will explains ‘some guy named Ben’ tried to strangle him with a necktie. “Dear God, Sami,” Marlena says in shock. “And you were watching from the closet,” Will exclaims. “What kind of mother does something that sick?” John asks for details and Sami explains she read in a psychology book of her mother’s that recreating trauma could bring one’s memory back. Sami feels she had it under control. Will orders her out and then Lucas finishes his tirade. He wants to call the cops but Will refuses. Sami begs Marlena to hypnotize Will right now but she refuses. Marlena understands why Sami did this but can’t condone it. Sami apologizes to Will. She thought this one moment would be worth him getting back his memory and living his life. “What you did was beyond twisted,” Will says. Sami needed him to remember but Will says if remembering his life is remembering she’s his mother, he prefers to forget. He runs to his room and everyone tells Sami to go. She leaves, crying.

Rafe and Sami find each other looking glum at the square. They hug. Sami says she lost her son forever.

Rafe and Sami Find Comfort in Each...