Kristen DiMera Appears, Alive, and Drops a Bombshell About EJ

Tuesday November 21, 2017: Will is finally told he's not EJ DiMera, Susan is sent to a psych hospital for evaluation, and Eve tells Maggie that she was set up by Brady. 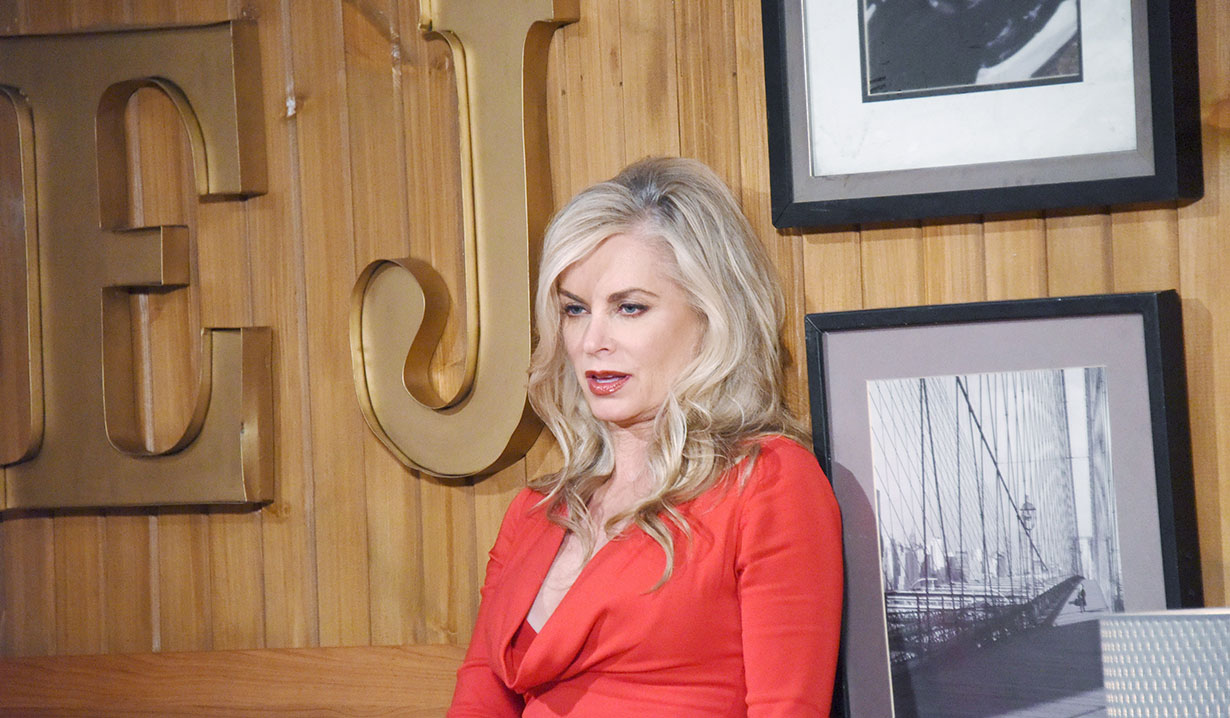 John and Roger arrive at the Memphis bar. Roger tells Will he’s not EJ. Will demands answers and pushes Susan away. Roger holds Susan as he explains that Susan lied about wanting to kill Will. She could never kill anyone. She and Dr. Rolf were stalking Will and saw a man go into the apartment and leave later, very upset. They went in and found Will still breathing and stable. Rolf gave Will an injection that made him appear dead so that when his loved ones found him, they’d think he was gone. At the morgue, Rolf gave Will another injection to resurrect him then erased Will’s memories. Roger explains he knows what she did wasn’t right but Will made her happy. Susan sobs, wondering how Roger could do this to her. He loves her and knows she needs help. Will begins to understand that this is why they kept him sheltered. Marlena steps in and calmly tells Susan she knows EJ’s death was unbearably painful and unthinkable but holding on to Will won’t bring EJ back. Susan says, “What have I done? I’m so sorry.” Sami starts to cry as Susan explains she just wanted to be a mother again. Everyone tears up as she apologizes profusely. Marlena makes a call to a psych hospital and Roger takes her there. Will has never seen Susan like this before. He runs off, causing Sami to freak out. Everyone calms her down and Marlena goes to check on Susan and Will.

Maggie is heartbroken to read about Theo’s shooting from the mansion. Vic calls it tragic. Maggie’s not sure there is much to be grateful for this Thanksgiving. Brady walks in and tells them there is. Will Horton is alive. He explains the whole story and that Lucas hasn’t learned the truth yet. Eve appears and is upset that her child is still dead. Eve informs Maggie the story about Brady setting her up to take the fall for killing Deimos. Brady denies it. Eve threatens to go to the press then takes a call and leaves the room. Maggie wants answers. Vic says neither he nor Brady killed Deimos. Maggie believes him. They snuggle on the sofa as Brady goes to Eve’s room. They argue and she’s hurt when he tells her she deserves to be exposed as a gold digger. She once thought he was a good guy. “What happened to you?” Brady explains people like Kristen, Nicole and Theresa took advantage of him and made him this way. He’s glad Theresa is gone. She’d probably have been a terrible mother, like Eve. Eve slaps him across the face and he poises his hand as if to hit her back but says he wouldn’t hit her. She boots him out.

Susan rests in a bed in the psych hospital in Memphis. Roger never meant for this to go on this long but Will’s been the only thing keeping her together. He thinks best way to help Susan is for him to leave. Marlena walks in and agrees so Will takes off. Sister Mary Moira, Susan’s sister, appears.

Marlena finds Will at Susan’s home. She knocks on his door and says, “Will it’s me, Grand…Marlena Evans.” He lets her in and she calls him incredibly loyal to Susan, who in many ways, was good to him. He’s frustrated and angry with her but can’t stop thinking of her as his mother. He won’t abandon her. Marlena thinks he could impede her recovery. She asks him to come home to Salem to try to find out who he is. She grins and lets him know they’ve had this conversation before. She explains there was a time he was struggling with being gay. Will tells Marlena that he kept being gay a secret from Susan since it didn’t fit in with her idea of who EJ was. Marlena fills him in on how happy he was to be true to himself. She asks him to consider coming home with her and then asks for a hug. He embraces her and she cries at how good it is to see him. She goes.

Marlena returns to the bar in Memphis and shares what went down. Will walks in, bags packed. “Is there room for one more?” Everyone cries though Paul looks concerned.

Back at Susan’s, Kristen laughs at Susan making Will into EJ when if she only knew she could have had the real thing after all. She laughs.

Susan's Boyfriend Can't Lie for Her...

Sami's Hurt When Will Enjoys...