Monday October 30, 2017: Brady and Victor are shocked by Eve's story, Sami, Sonny, Paul, Marlena and John meet Elvis, and Chad and Abigail get into the Halloween spirit. 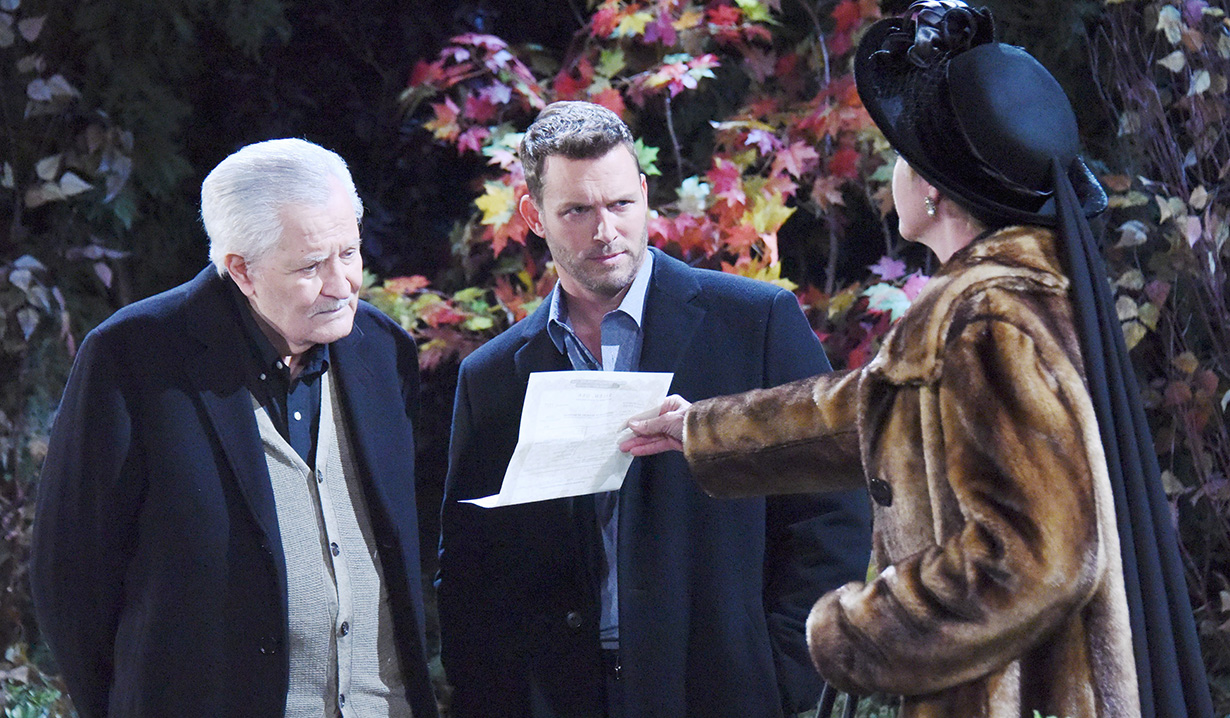 Brady and Victor are surprised to run into Eve Donovan at Deimos’ gravesite. She asks, “Where else would I be but at my husband’s side?” The men are confused. Brady asks if Victor married her. Eve clarifies that she married Deimos six months ago. Victor looks to the sky and asks why he gets all the crazy women. Eve shakes her head. She brought proof. She shows them a marriage certificate. It happened in April while Nicole and Brady were in Canada. She tells them about returning to the mansion and Deimos being the only one there. Deimos told her that Tate wasn’t there because Brady took off with him. She admits she had lost her job and apartment and needed a place to stay. She took advantage of Deimos’ vulnerability. She faked commiserating with him and told him if he would have won Nicole’s heart he’d be bored in a heartbeat. Deimos found that amusing. Victor finds that a crock. He assumes Deimos was drunk when he married her. Eve says that’s untrue. They bonded over lost love and a mutual dislike of Victor. They married in City Hall and honeymooned in the tropic until he left her high and dry. He got a lead on Nicole. Eve was notified that his remains were released, which is why she’s there. Victor asks what she wants. She says, “It’s neither the time nor place to have that particular conversation.” She goes. Chad and Abigail are dressed up for Halloween with Thomas as a pumpkin at Horton Square. Abigail nibbles on candy corn and tells Chad that she used to eat too much candy as a kid and it gave her nightmares. Now that she’s with Chad, there are no more nightmares. They kiss. She tries to sneak more candy until he reminds her that she had a nightmare last week that Salem was under water and she couldn’t swim.

On the phone, Kate tells someone that she’s sorry they weren’t told that everyone went to Memphis. In Memphis, Elvis, (played by John Enos), appears with Halloween candy at the house Sami, John, Sonny, Paul and Marlena have let themselves into. When Sonny asks what Elvis knows about Will Horton, Elvis drops the candy but claims he doesn’t know any Will Horton. He kicks them all out. When they won’t go, he shows them his gun. Paul takes it from him – it’s only a cap gun. John shows his own, real gun as Sami calls the cops and then Paul explains why they’re there. When John mentions Rolf’s name, Elvis says he knows Rolf. Sami says Rolf was paid to bring her son back from the dead. Elvis doesn’t know Will but says Rolf brought him back from the dead. Sonny goes nuts and grabs Elvis. Elvis karate chops Sonny who falls to the floor. Marlena and Paul rush to his side. He’s unconscious. John calls paramedics. The cops arrive and Sami urges him to arrest Elvis. Elvis asks him to arrest them for breaking in. He hands his drivers license to the cop as Sami tries to explain why they’re there. The paramedics arrive and take Sonny away. The cop tells Sami to get out of Elvis’ house. When she refuses, he grabs her by the arm. She scratches him and he checks his cell phone and learns she’s been arrested a lot. He takes her ‘downtown’. Somebody watches from another room. Once the house clears out, Elvis says, “You can come out now, they’re gone.” Theo arrives at the loft to Claire dressed as a tiger for Halloween. Theo thinks people are idiots who dress up. He’ll meet up with her later. He has something else to do. He goes and Tripp appears in a towel. His towel drops when Claire turns around. Claire looks down and grins. Tripp smiles and looks awkwardly around. Later, Tripp has dressed. Claire’s grossed out eating candy with nougat. They wonder where Theo went. They discuss his autism and how honest he is. Tripp likes it but worries that he’s not wanted there. Claire begs him to stay.

Theo arrives at the DiMera mansion to an anxious Kate who tells him she needs his help, and fast. She hands him confidential documents. He’s not to talk to anyone about this. Theo hates secrets. Kate says this is one he must keep. ready for the party. Tripp tells them to have fun. He’ll man the door. He grabs the candy as they take off.

Chad and Abigail are shocked to learn Ben’s on the loose.

Halloween in Salem With the Dead...