Eric Accuses Brady of Blackmailing Nicole and Then Attacks Him 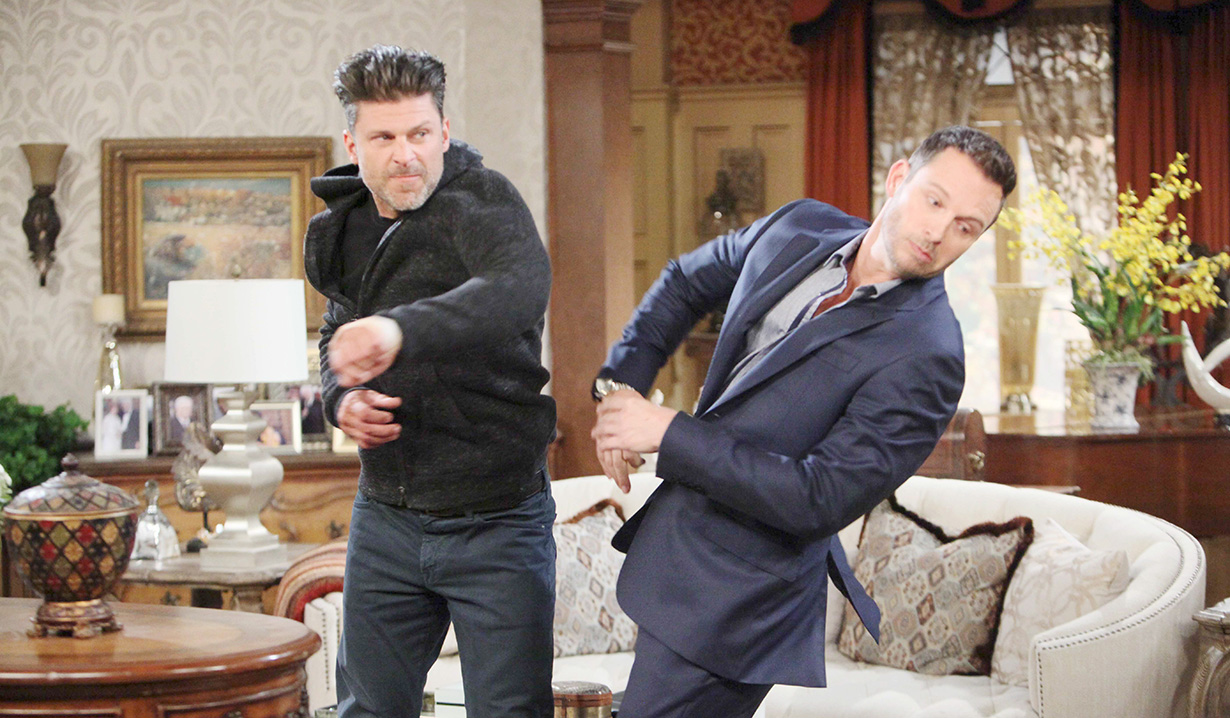 In their bedroom at the DiMera mansion, Chad romances his wife with breakfast in bed. They make love instead of eat. Downstairs, as a reporter for The Spectator, Jennifer asks Kate to talk about the power play between Kate and Andre at DiMera Enterprises. Kate insists she’s got nothing to worry about and asks Jenn to leave. Jenn hounds Kate a little until Chad and Abigail appear. Jenn and Abigail go off for coffee while Kate gripes about Jenn. Chad’s surprised Kate’s not spinning her words for Jenn to use to her advantage. Kate’s too busy worried that all the companies she has been targeting are getting bought up under her. “It’s like someone’s one step ahead.” Chad calls it an inside job. They wonder if Andre is sabotaging them and decided to keep the thought confidential though Chad refuses to lie to his wife.

At the Kiriakis mansion, the alcohol calls to Brady but he drinks a coffee instead of booze. Chloe appears with a payment for the loan Brady gave her. Brady’s supportive of her venture though she lightheartedly complains about working with Julie. Chloe wants to know what happened with Nicole. Brady assumes she knows that Nicole is in love with his brother. Chloe looks guilty. Brady says not to worry. He’s used to being dumped. Chloe doesn’t want his anger to turn him into someone he’s not. He needs time to heal. Brady’s focusing on Tate and is hopeful he’ll be reinstated as permanent CEO at Titan. Chloe’s glad for his optimism and suggests they take Tate and Parker to the pumpkin patch tomorrow. They hug and once she’s gone, Brady pours a drink. Eric has coffee at the pub and thanks his dad for letting him crash there last night. Roman heard he and Nicole are back together and hopes his son will be happy. Eric updates Roman that they’re not together and that Nicole left town. Roman’s confused. He asks what happened. Eric has no idea but whispers that he intends on finding out. Roman takes a call and grits his teeth. “Sami did what?” They disconnect and Roman shares news of Sami’s arrest. Eric shrugs it off and tells his dad he’s back in Salem permanently. Roman’s grateful. Eric goes off to see his brother.

Rafe busts into SPD, demanding to know why Hope arrested Sami. Hope explains what Sami did and Rafe can’t believe Hope let Sami get her gun. Hope explains she or Sami could have gotten hurt. Rafe thinks Hope could have given her a warning. She tried. She tells Rafe that Dr. Rolf’s dead and it’s basically Sami’s fault. Rafe champions Sami again and Hope calls him a hypocrite. Rafe felt Hope went too easy on JJ, but Sami did the same thing. Rafe feels there’s a difference. Sami is a grieving mother while JJ’s a cop. Hope accuses him of defending her because she’s his ex-wife. Rafe denies that. He thinks Hope should put herself in Sami’s shoes. What if it was Zack? Hope looks hurt. She can’t believe he went there. Rafe apologizes. Hope says her decision stands. Rafe apologizes for second guessing her. Hope’s glad for his honesty. She doesn’t like pulling rank. Rafe calls a truce. They hug and profess their love, then worry the clues leading to Will will run dry. Hope gets a call. They know where the payments from Rolf were coming from. At the square, Jennifer and Abigail discuss how tough Jenn was on Kate. Jenn argues that sometimes you have to be a pitbull in order to get your story. Abby asks if her mom is balancing work with a social life. Jenn talks about helping Eric to move back to Salem after he and Nicole broke things off so he could be of assistance at the Horton Center. Abigail sees that as an in for her mother. Jenn isn’t so sure. When Abby leaves, Jenn daydreams about Eric. Chloe pops up. Has she heard from Lucas? Jenn says their intervention failed.

Eric arrives at the Kiriakis mansion. The men have it out over Nicole. Eric demands to know what Brady said to Nicole to make her leave him and Salem. Brady questions how he could have sex with his brother’s woman. Eric says they were trying to be honest. Eric blurts that they both lost her now. He accuses Brady of threatening her. Brady says she left because she wanted to. He calls her a “selfish, lying slut” and Eric punches him out.

Abigail appears at home as Chad is telling Kate he won’t lie to his wife. Kate leaves them alone where they canoodle. Roman arrives to tell Kate that Sami’s in jail and the events leading up to Rolf’s death. Kate’s crushed knowing this could affect their search for Will. They hug. 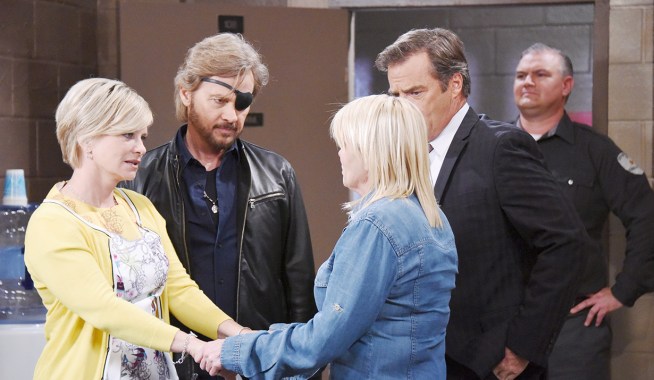 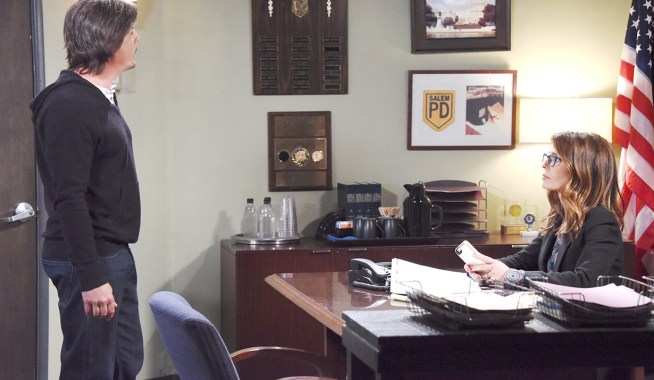