Thursday October 5, 2017: Lucas learns that Will could be alive, Nicole confronts Brady about his wedding speech, and Sonny asks his father to find a way to exhume Will's body. 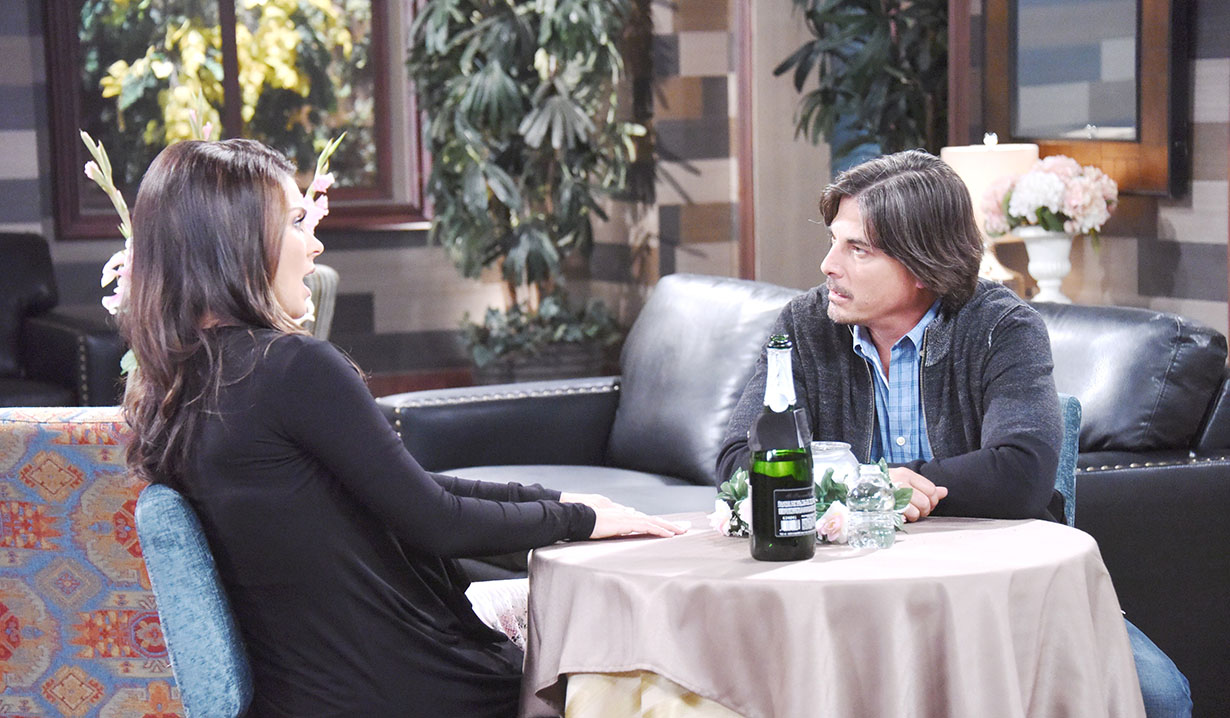 Lucas steps into TBD, grabs and opens a bottle of champagne and drinks to the bride and three grooms. Chloe walks up to the door and sees Julie changed the sign to “Doug’s Place.” Chloe mumbles, “The nerve of that woman.” She goes in and Lucas asks where everyone is. Chloe tries to take the bottle from him but he’s ready to show everyone his chicken dance and needs to apologize to everyone for being rude. Chloe explains there’s no reception because there was no wedding. She’s hesitant and gently explains what happened when Ben ruined the wedding. Lucas can barely breathe. “It’s impossible.” He takes off to find answers and Chloe races after him.

At the square, Nicole and Brady discuss the nightmare wedding. Brady takes a call, and it doesn’t go well. He shares that he’s trying to get Titan back to where it was before Sonny fired all the employees. He can’t seem to do anything to get those former employees to return. Nicole defends Sonny, making Brady cringe and point out that she’s always defending others. Nic assures Brady he’s the most important man to her. She brings up his unusual speech at the wedding. She read between the lines and thinks he was talking about them. Brady flashes to his brother admitting he loves Nicole. Brady says he knows things have been strained between them but doesn’t want to lose her. She claims to feel the same. They kiss. Brady goes to get water and Nic flashes to Eric almost kissing her. She sees a guy and wonders if he’s Eric. Her baby cries and she snaps out of it and pays the kid some attention. Chloe comes upon them. They gossip about Ben and Chloe shares that Lucas knows. Nicole feels for Lucas and is thankful Brady’s sober. Chloe looks guilty so Nic asks if Brady’s been drinking. Chloe says no. Talk turns to Eric. Nic tells Chloe he left town. Chloe knows. “He left because of you.”

At his cottage, Eric notes the water coming in from the roof. He has to fix the leak before the storm comes in. Roman calls and shares the news about Will possibly being alive. Eric’s shocked. They disconnect. Eric rushes to the store to get supplies, then returns home and stares at a box full of Nic’s photos. In the park, Gabi tells Eli it took everything she had to stay strong for Arianna. Why would Ben say Will is alive? Eli asks if there’s a chance it’s true. Gabi lets him know she’s the one who found him. She did CPR. Gabi cries when she recalls Arianna crying out for her father long after his death. She brings up Paige and how she didn’t even know they were sisters until after her death. Gabi knows Eli can relate as he didn’t get to meet his father before his death, either. Later, Eli decides to show Gabi a few defense moves but she has moves of her own and quickly throws Eli on his arse. She sucks in some breath and lifts him up. His pride is hurt. She’s stronger than she looks, he says. They kiss.

At the Kiriakis mansion, Sonny tells Justin and Paul that he knows Will’s dead but a part of his heart wishes it wasn’t true. Paul looks pained. Sonny tells his dad they want to exhume Will’s body. Justin’s rocked. Since Sonny and Will were legally separated at the time of Will’s death, only Will’s parents would have that authority. Justin goes and though Sonny wants to marry Paul, he needs to know the truth. Lucas saunters in and demands answers. Sonny doesn’t know much but he and Paul try to get him to exhume the body. Lucas is devastated. “No way,” Lucas yells. He saw his son’s corpse. Lucas yells that he failed his son and nothing he drinks stops him from seeing his son dead. He takes off, sobbing. Brady walks into the pub and considers getting a drink. Roman appears and gets him a club soda. Brady thinks of his brother and Nicole and talks to Roman about Will. Roman wishes he could have beat the hell out of Weston. Eric’s name is brought up and Roman asks if Brady knows why Eric moved away. Brady lies. When Roman’s back is turned, Brady sucks back some vodka.

Chloe has a pretty big bombshell to drop.