Tuesday October 3, 2017: Abby, Kate, and Marlena reel over the news that Ben has brought, that Will could be alive, as Sonny asks Ben for answers. 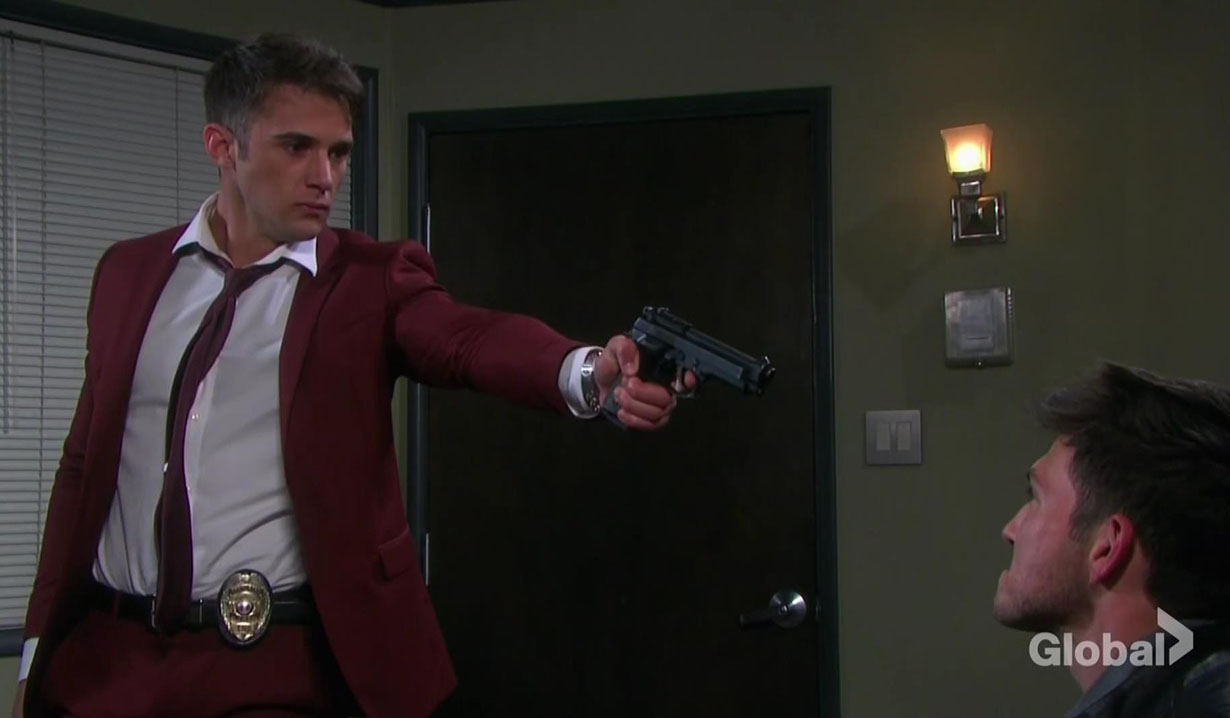 All the guests have left St. Luke’s. Abby and Chad sit in a pew and agree their special day was a nightmare. They rehash it. Abby worries about Sonny, then pats herself on the back, knowing she got over the nasty time she had with PTSD and came out stronger than ever in the end. She calls Gabi who tells her Arianna’s fine. They disconnect and Chad says he’s proud of his wife, who could have easily freaked out and called the interruption an omen. They laugh.

At SPD, Ben brings up Sonny basically reciting a love letter to Will in his vows to Paul. “The dude ain’t dead,” Ben tells him. He wants a deal. He wants Chad and Abby to suffer the way Will did. “Mark my words. They will,” he remarks. Sonny turns to go. He’s not about to hurt Abigail. At the DiMera mansion, Kate calls Hope to ask if Ben has told her anything yet. He hasn’t. Kate wonders if Clyde helped Ben escape. Hope’s awaiting word on this from the prison Clyde’s serving his sentence. They disconnect and somebody touches Kate’s shoulder, making her jump. It’s Andre. She yells at him and he apologizes. She calls up old memories of how wonderful Will was. Andre blots her tears with his hanky. “You were close, weren’t you?” Will reminded her of Lucas. Kate calls feeling hope over this to be cruel. She considers telling Lucas but Andre advises her to get more information before she goes there. Kate blames herself for Lucas’ drinking and says he hasn’t called in days. Andre offers to have one of his men search for Lucas, which touches Kate. She’s glad her ‘frenemy’ was there with her today. Maybe the sight of Abby and Chad’s love made his heart less dark. He laughs. Is she mocking his speech? She says no, she thought it was lovely. She thanks him and they hug. When they break from their hug, they come close to kissing. Andre leaves to check in with Chad. At the pub, John holds Marlena as she cries. Afterward, she tells John she called Bayview to consult on his case. “After what they did to me in that place,” she says, “If they don’t help me, they’ll have a lawsuit on their plate.” Marlena begins to have hope that Will really is alive. She knows it sounds ridiculous but wouldn’t it be wonderful? She thinks Kate must be feeling the same. Marlena realizes if Will were alive, that could spell disaster for John’s son. She apologizes. John understands. Plus, he loved Will too. Back at SPD, Hope and Rafe discuss getting Ben back to Bayview as soon as possible. Nearby, JJ has to hold Paul back from joining Sonny in the interrogation room. Abe calls Hope. He needs to meet with her and Rafe immediately. Back in interrogation, Ben stops Sonny from leaving by saying that sometimes things aren’t always as they appear. Sometimes there’s more to the story. JJ lets Paul in as Ben reveals that he waited this long to say anything because Sonny can’t marry Paul since he’s already married – to Will. Paul yells at Ben for murdering Will and reminds Sonny of this.

Abe meets Rafe and Hope at the park. He tells them after Ben broke out of Bayview, the town needs to know somebody is in charge to keep them safe. He needs to appoint a commissioner immediately and has made a decision. He tells them who the new commissioner is, then goes. Each asks the other if they’re okay with it. They’re both cool with it. Hope takes a call and learns Clyde’s still in prison. She calls Kate to tell her.

Back at the church, Abby calls JJ but he has no updates for her yet. She thanks him for having her back.

Back at SPD, Paul convinces Sonny to stop listening to Ben “spew this crap.” Paul wants to continue their wedding. They leave Ben alone. JJ approaches him and closes the door behind him. Ben complains he’s hungry. He was hoping for wedding cake. JJ says he should be getting the electric chair. JJ grabs Ben’s hair and yells, asking if Paige and the others are alive, too. Ben wonders why JJ cares. He cheated on her with her hot mother! JJ lets go of Ben’s hair and Ben calls Paige “worm food.” JJ takes out his gun and Ben pushes his head up against it.

Abe finds John and Marlena at the pub. There’s no word on Ben, but he has chosen the new commissioner.

Back at the park, Rafe starts thinking about Paige. Hope knows it’ll be tough on Rafe seeing Ben. Rafe will focus on work and Hope will help keep his head on straight, “Commissioner Brady,” he says. “Or should I call you boss?” Over at the square, Sonny tells Paul he can’t marry him. “Not today.”

Paul helps Sonny get the answers he’s looking for.