Monday September 18, 2017: JJ talks to Paul about Will and Sonny's marriage, Sonny feels guilt over abandoning Will, Lucas talks to his son, and Jennifer and Kate worry about Lucas. 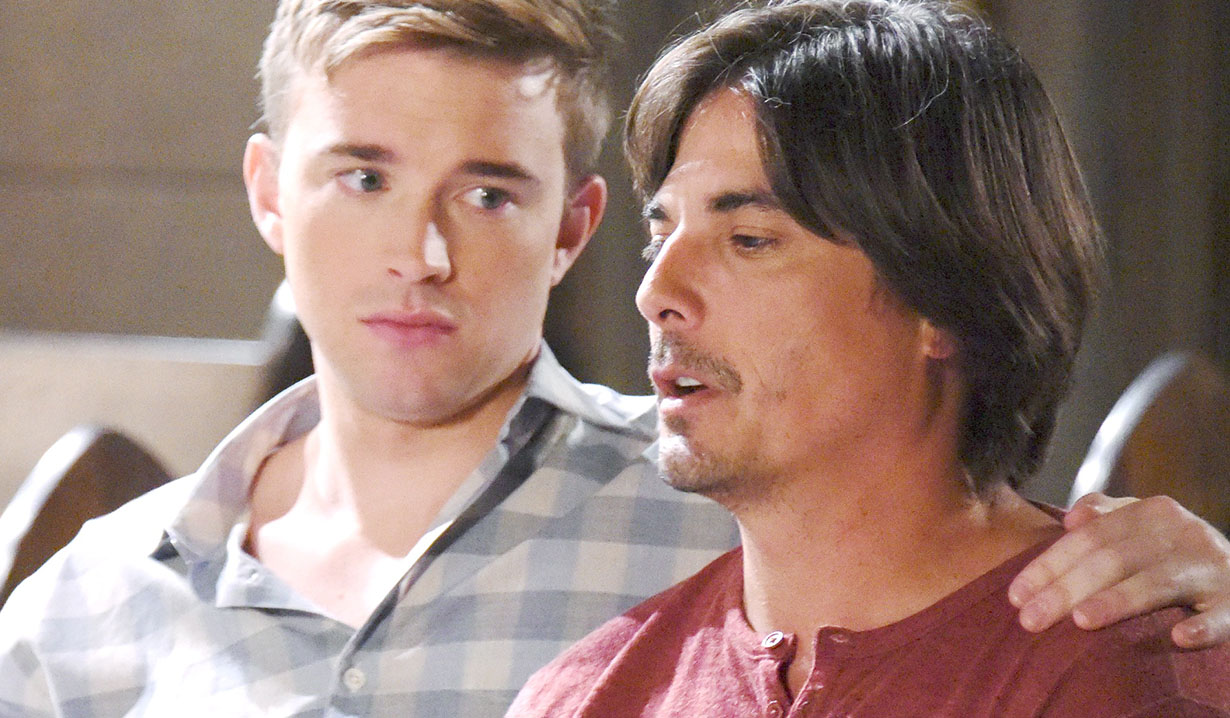 In the square, Arianna rushes up to Abby to tell her she’s going to be her flower girl. Abigail looks at Gabi uneasily but the brunette grins. She tells her friend about Ari practicing and wonders why she’s not at the church. Abigail tells her about drunken Lucas causing a scene. Gabi’s sorry. Abigail says they finished everything they needed to do. She asks if Gabi will be present at the wedding. She wants her there but will respect whatever she decides. Gabi has decided to go. Seeing everyone happy matters more than what she’s feeling. She has all the time in the world to get over Chad. The ladies profess their love for each other. They hug. She’ll bring Eli, though it’s not a date.

At SPD, Paul picks up JJ early to try on tuxedos. He tells his friend that they got interrupted at the church by Lucas and the details. The two head to lunch together. At the Kiriakis mansion, Sonny is pissed. He rants about Lucas getting drunk and making pot shots to him. Sonny will never forgive his ex-father-in-law. Chad knows that Lucas doesn’t really think he’d forget about Will. Sonny motions to the area nearby where he and Will took their vows. Chad says not to take this personally. Lucas is in pain. Sonny admits Lucas is right. He did abandon Will. Chad says that’s not what happened. Will made a mistake. Sonny refuses to see things that way so Chad spells it out. Will had sex with someone else. Sonny is hurt that Will died thinking he didn’t love him. Sonny admits he was going to go home and tell Will how much his last message, which was filled with love, meant to him – that he felt the same. Chad tells his friend he needs to forgive himself. It’s what Will would want. Sonny perks up and they hug. At St. Luke’s Lucas sees Will. He turns away, thinking it’s a hallucination and Will disappears. Lucas yells that he’s sorry and Will pops up on the pulpit. He asks his dad how he fell so far. “You’re drinking again.” Lucas lies. Will says, “I’m in your head. You can’t lie to me.” Lucas cries that he has missed his son so. He thinks about Will every day. They reminisce. Lucas cries some more. Will thought his dad beat his addiction. Lucas reminds his kid you don’t beat it. You hang in there. He touches base on Adrienne, with whom Will calls “really good for you.” Lucas says there’s no future. The past is only full of pain. Will urges his father to get a hold of himself. He wants Sonny to be happy. And maybe Lucas is meant to be with someone else. “What about Mom?” Lucas says she’ll always hold a special part in his heart but they were a disaster together. Lucas takes another swig from his flask and Will asks if that’s his plan – to wallow in his pain. Lucas doesn’t have a better plan. He tells his kid to leave him alone. Will is counting on his dad to be there for those he loves and who love him. He begs his dad to let them in. Lucas guzzles some more booze from his flask and refuses to give it away. “It’s all I have left.” Will opens his arms. “Why don’t you hold on to me?” Lucas argues that he’s not real. Will tells his father he loves him. Lucas says, “I love you buddy,” and accidentally falls and gets knocked unconscious.

More: Days blog: What’s captivating to some is boring to others

At the DiMera mansion, Kate and Jennifer discuss Hattie for The Spectator. Jenn asks if she’s still divorcing Andre and asks what that means for her part as CEO. Kate has information but it has to be off the record. She then drops a bombshell. “Lucas is drinking again.” Jenn knows. She tried to get him to go to a meeting but he refused. Kate worries she made things worse by firing him. Talk turns to how peculiar Adrienne’s been acting. Abigail pokes her head in to tell them she knows where Lucas is and he needs them right now. At the pub, Paul tells JJ more about Lucas’ drunken rage. Paul blames himself for breaking up Sonny and Will’s marriage. He didn’t step back and let them work things out. Maybe if he had…JJ says to stop this. It’s Ben’s fault Will is dead. Paul’s the best thing that ever happened to Sonny. He brought love back into his life. Paul’s curious of what Sonny and Will’s relationship was like. JJ says they fought to be together and seemed to work. Will grounded Sonny. Paul looks fraught. JJ reminds his pal that that was all in the past and Paul and Sonny have a future.

Sonny’s fitted for his tux when Paul arrives at the Kiriakis mansion. The tailor leaves and they talk about the emotions that Lucas’ raging out brought up. They agree to talk about Will before they are married.

Kate and Jennifer arrive at the church and try to get Lucas to respond.

Hurt and drunk, Lucas tears into...

Eric is aroused sitting near Nicole...