Wednesday August 30, 2017: Paul confronts "Marlena," Chloe calls in a tip about a dead body at Salem Inn, and Nicole's hearing is set for today. 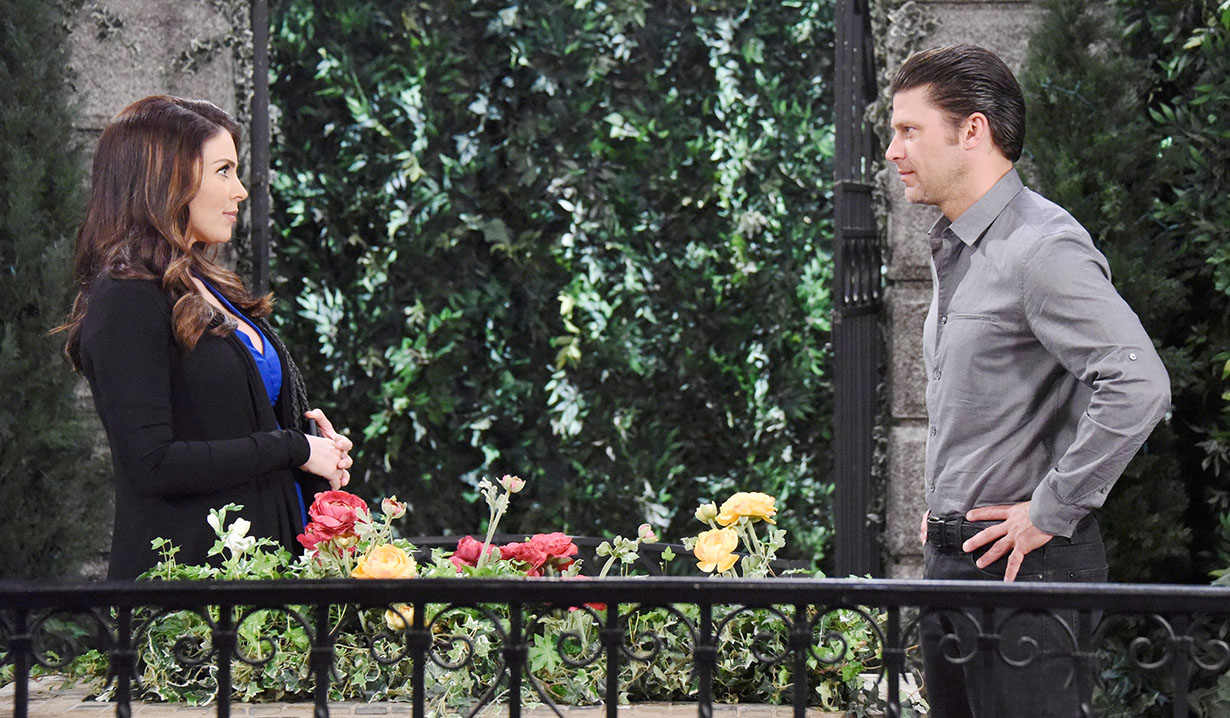 Nicole and Brady arrive at the Kiriakis mansion after a run. The run didn’t clear Nicole’s head and she ruminates about Deimos. She wonders if the judge will keep Holly from her. Brady doubts it. Justin interrupts. Nicole’s hearing is today. Brady and Nic go get ready while Justin calls Eric to meet them.

Chloe calls the cops from the park to anonymously report a dead body. Eric walks up. He didn’t hear anything. She asks if he’s planning on telling Nicole how he feels about her. Eric doesn’t want to cause issues between himself and his brother. Chloe understands but hopes Brady doesn’t find out on his own.

Hope and Rafe arrive at TBD. Inside, Myron answers a call from Raines who demands he get the evidence he needs as soon as possible. Myron disconnects as Rafe and Hope walk in. They immediately tell Myron they know he’s working with Raines. Myron lies that Raines was looking for proof that Abe’s Dario’s silent partner. Rafe says it’d be a shame if Myron did anything to obstruct justice, and Myron starts stammering and admits that Raines threatened his life if he didn’t help him frame Mayor Carver. He didn’t even know Raines was the silent partner until that point. Rafe tells Myron to follow Raines’ orders so they can catch Raines in the act of committing a crime. They offer police protection. Myron calls it entrapment and runs off. Hope goes after him.

Paul arrives at Mandalay and tells “Marlena” he just learned that she broke John’s heart. Hattie sputters. Her heart is broken too. Paul asks, “Is that why you kissed Roman Brady?” Hattie almost chokes on her food. Does everyone know about that? She says John should move on.  “Onward and upward.” Paul shakes his head. This doesn’t sound at all like her. Hattie brushes that off and lies that John had another ISA mission. Paul says that’s not true, and she knows it. In all the time they’ve spent together, he’s never seen her act this way – she’s cold. Hattie calls him a spoiled brat, which further confuses him. Then she asks him for a “fancier way” of saying “spoiled brat” and Paul’s more befuddled. He begs her to give his dad another chance. Hattie calls it ‘three strikes and you’re out’.

More: Congrats to Blake Berris on his new marriage

At Bayview sanitarium Marlena and John talk through the vent that joins their room. She tells John not to take any of the drugs the orderlies give them. He tells her not to worry. He’s about to bust them out of there – today. With a little struggle, he gets out of his straightjacket and instructs Marlena how to do the same, but she can’t do it. He reminds her of when she was in labor with Belle and how cool and focused she was. He knows she can do this. Eventually she’s free. He tells her to get out of her room and keep running, then they can “track down Mad Hattie.” They’re happy they’re able to hold hands through the vent. At Salem Police Department, Lani and JJ gossip about Raines. When he arrives, Lani covers and tells him she wanted to apologize for how things went down. Lani goes and JJ admits to Raines that he’s starting to think that Abe really is Dario’s silent partner. He tells Raines that Abe married into the DiMera family. If he was driving the car that ran his sister down, he should rot in jail. He tells Raines to come to him if there’s anything he can do. Later, he tells Lani about the talk. Raines leaves and JJ tells her this is almost over.

Chloe and Eric meet Brady and Nicole in the judge’s chambers. Chloe offers to help and they go off for water while Brady thanks Eric for testifying and apologizes for ransacking his room. Eric accepts and tells his brother nothing will ever happen between him and Nicole. They hug. Nic returns and Eric has to look away when she kisses Brady. Justin appears and says, “I got a message from the judge. He knows what you did…”

Hope follows Myron to the park and tells him Raines won’t stop until he finds him. Myron cries that he didn’t sign up for this. Hope knows. She also knows it’s his opportunity to change things. They shake on it. Chloe arrives at TBD. She’s sorry about what happened with Dario. Does Rafe know how things stand with the club? Rafe says the feds froze his assets including the club. Rafe gets a call from a cop about the dead body at Salem Inn and Chloe runs off. Outside, Raines calls Myron to set things up.

Kayla talks with Val about her romantic issues. 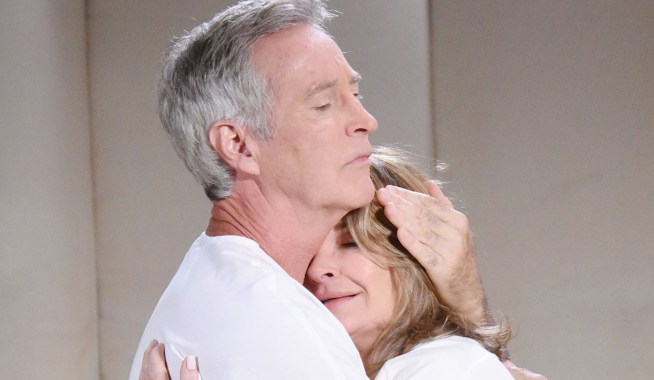 Brady goes above and beyond to ensure Nicole gets Holly back 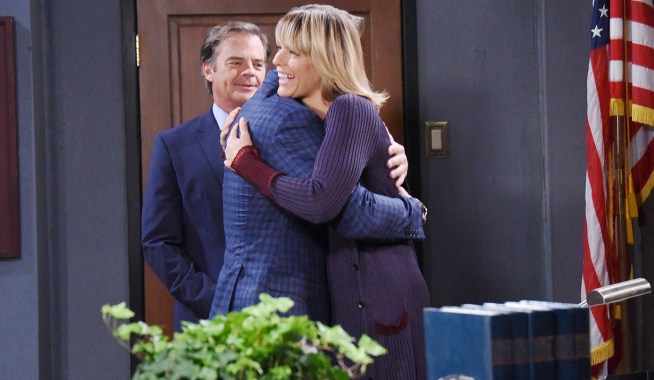